Hundreds of movies get greenlit every year, but few actually make it onto the silver screen. Sometimes they’re stuck in the eternal development loop, while others get shelved and never touched again. Screenwriter and filmmaker Joshua Hull has compiled fifty of the greatest movies never made into one book and it is a heartbreaking read.

Go Behind the Scenes with Underexposed!: The 50 Greatest Movies Never Made 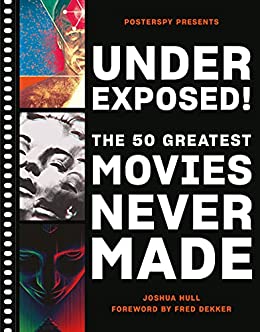 From the misguided and rejected films that should have never been dreamed up; to ill-fated films that ended up changing hands too many times; to masterpieces that still might come to fruition one day, Hull has it all. He delves into plotlines, rumored castings, behind-the-scenes stories, and each entry features a gorgeous could-have-been poster.

I don’t want to go too in-depth with my review because Underexposed!: The 50 Greatest Movies Never Made is the kind of book you will want to read for yourself, but some of these movies make my heart hurt that we’re never going to see them at the movies. In particular, George Miller’s Justice League: Mortal.

I’m a DC Comics superhero lover and reading through Hull’s description of the film that never was and never can be made, made me quite sad. From the idea of the late Anton Yelchin as Wally West; to D.J. Cotrona as Superman and Santiago Cabrera as Aquaman — the cast could have launched something incredible for DC Comics in the early 2000s. But with Nolan’s The Dark Knight set to release, among many other issues, Miller’s Justice League never found its way into the Hall of Heroes.

Underexposed!: The 50 Greatest Movies Never Made is filled with superhero movies that never made their way past the early phases of production. So if you, like me, love superheroes — you’ll want to pick up this book.

Other highlights included Tim Burton’s Monsterpocalypse which was in direct competition with Guillermo del Toro’s A Killing on Carnival Row (which became the Amazon Prime series Carnival Row). Hull points out that back in 2016, Fede Alvarez had signed on to co-write and direct a revived version of Monsterpocalypse which was still in development in 2019.

Hull does well with documenting the known facts about each of the films, delving into the subjective opinions about what went wrong with different productions, and goes the extra mile to connect the throughlines between the development of different projects over the years. It makes for a fun and, oftentimes, surprising read. I know I’ll be pulling out some of the facts I learned the next time I’m around my industry friends.

If you love getting a glimpse behind the scenes into how movies are made, even if they are never actually made, you’ll want to pick up this book. Especially in the social media age, a lot of people fail to recognize how many projects get greenlit and shelved. It’s a natural process and sometimes, if the film concepts are good enough, they’ll even find new lives.

You can pick up Underexposed!: The 50 Greatest Movies Never Made today.

Underexposed!: The 50 Greatest Movies Never Made

A Fascinating Look at Movies that Were Never Made

How To Do Taxes on Your Own: Your Complete Guide

Here Is Your Complete Guide to Debt Relief