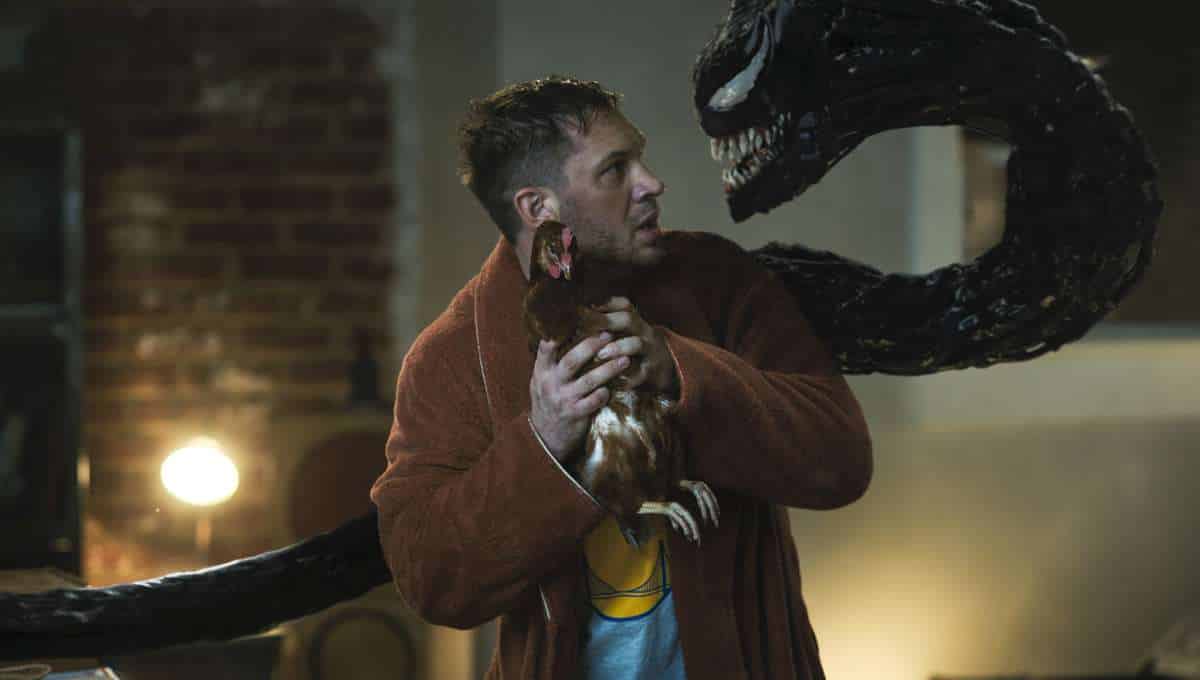 Venom: Let There Be Carnage completely doubles down on the silly humor and the banter between Eddie Brock (Tom Hardy) and Venom, but it also adds in a love story or two.

Doing so brings a lot of emotion and heart to the film, which fans are sure to appreciate. So if you heard Andy Serkis say this movie is a love story and thought to yourself, “Huh? How will that even work?” just know that it does.

Yes, Venom: Let There Be Carnage Is a Love Story

This movie is unafraid to dive into the issues that many couples face when they are in a relationship. Spending a lot of time together can definitely cause people to get on each other’s nerves, and if you know anything about a symbiote, it is a that it cannot separate from its host for very long. Because of this, Eddie and Venom are stuck together, starting to grate on each other.

Their relationship is fragile now, and the added stress that Cletus Kasady (Woody Harrelson) is causing them is not helping. This movie explores those fractures while also allowing both parties to see how much they need each other – and love each other. They were compatible from the very start, which is not common for symbiotes, and certainly not for a long time. That is why Eddie and Venom work so well together, even if they do have their squabbles.

In Venom: Let There Be Carnage, their relationship is explored on a deeper level and is truly a love story that shines through, making the film emotional. There are even some tear-shedding and heartbreaking moments between the two.

They aren’t the only love story that is explored, however. Cletus has a love interest of his own, which is revealed in the movie's opening scene. He was in a home for unwanted children with Shriek (Naomie Harris), and the two made a connection – before she was ripped away from him, causing the two of them years of torment.

Throughout the film, these two relationships are compared and contrasted. One couple is torn apart and wants nothing more than to be together; the other is so volatile that they both want to find a way to be without each other. That being said, they both feel like real, true relationships – and are sure to be relatable to anyone who has been in love before.

Along with the love stories, there is a ton of humor, incredible visuals, and a lot of action. Fans of the first Venom will be thrilled to find the same kind of ridiculous silliness dialed up a few notches, while those who didn’t enjoy it will likely be rolling their eyes again.

Venom: Let There Be Carnage clocks in at just 90 minutes, making it a quick watch that doesn’t try to do too much. There is a story to be told, and it tells it in a timely fashion without unnecessarily dragging things out.

The visuals have a serious upgrade from the first one. Seeing Carnage in brutal action is something that will stick with fans of his for a long time. Carnage is a cold-hearted killer in comic books, and that is exactly what Harrelson brings to him on the big screen. He doesn’t care about anyone – not even the one person Cletus cares about. This is exactly the type of symbiote he is in the source material. Casual fans will quickly realize that Venom is the least aggressive and terrifying symbiote of them all, and Carnage is easily one of the most.

Hardcore fans were hoping this film would get a hard R rating so that Carnage could fully unleash his horrors, but it can be argued that he can express himself quite a bit in Let There Be Carnage. Sony was unafraid to push that rating as far as they could, and it worked out for the better. If they went full R, it would have been hard to connect this film with the previous one successfully, and it would have had a totally different feel.

Overall this movie is an absolute blast. This is exactly what we needed after a difficult 18 months. A film that will have us laughing at silly jokes, enjoying epic action, and forgetting about the world around us. Plus, everyone loves a good love story!

Venom: Let There Be Carnage

This movie is an absolute blast. This is exactly what we needed after a difficult 18 months. A film that will have us laughing at silly jokes, enjoying epic action, and forgetting about the world around us.