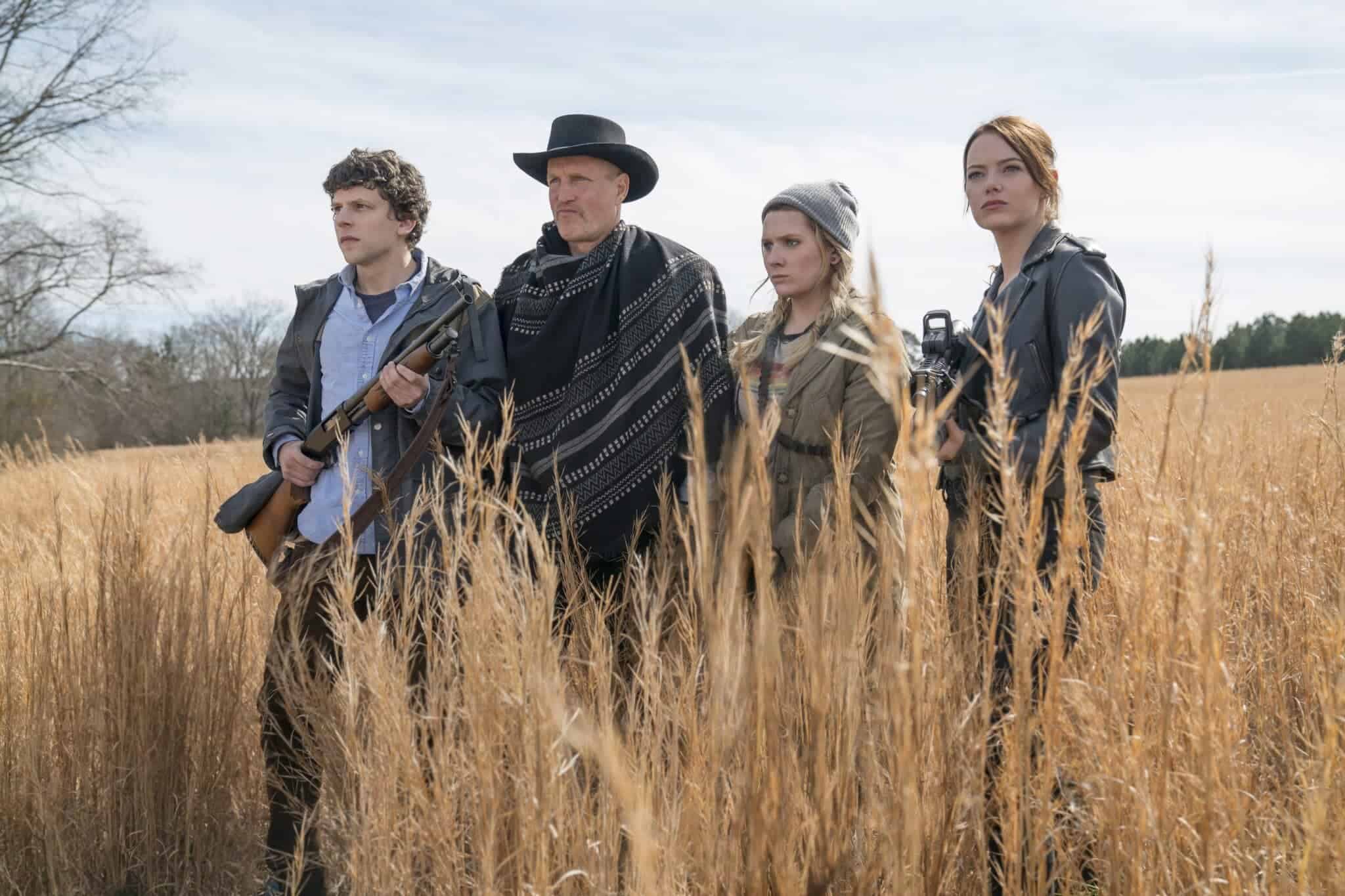 It's Time to Nut up or Shut Up!

Zombieland surprised just about everyone when it rose from the dead and staggered into theaters in the fall of 2009. A hilariously unexpected upheaval of the zombie genre, the sleeper hit about a motley crew of apocalyptic survivors was an incredible stepping stone for all those involved.

It was the first feature film job for director Ruben Fleischer, as well as a big break for screenwriters, Paul Wernick and Rhett Reese. In the years since, Fleischer has gone onto direct big-budget flicks like Gangster Squad and Venom, while Wernick and Reese got to pen a little movie you might have heard of called Deadpool.

Even Zombieland’s minimal cast went on to do great things. Woody Harrelson (Tallahassee), Jesse Eisenberg (Columbus), and Abigail Breslin (Little Rock) have all been nominated for Academy Awards, while Emma Stone (Wichita) actually took one home for her performance in Damien Chazelle’s La La Land.

In the last decade, these actors have become top tier A-listers. They’re major players in Hollywood alongside Fleischer, Wernick, and Reese.

That’s why it’s nothing short of a miracle when they all agreed to come back ten years after the fact to make Zombieland: Double Tap, a long-awaited sequel (named for Columbus’ rule of shooting a ghoul twice) that doesn’t quite reach the undead heights of its predecessor. With that said, it still gets by on a butt-load of charm, some big laughs, and more than a few clever world-building gags.

To ease us into this universe after so many years away, a voiceover from Eisenberg joyously welcomes us back and provides a rundown of the three types of zombies one is apt to find in this new, flesh-eating world: the lumbering, but mostly harmless, “Homer”; the sneaky and silent “Ninja”; and the resourceful “Hawking.”

From there, the film delivers another slow-motion credits sequence set to another Metallica song. Our disparate heroes, still a tenuous family unit in the wake of civilization’s collapse, bloodily dispatch a group of zombies on the White House lawn before setting up base in our nation’s most famous building.

This presidential setting is a ripe location for wringing comedy out of the importance humanity places on history. With no more government or infrastructure, once-priceless artifacts (a Colt 45 given to Nixon by Elvis or a hand-painted portrait of President Taft) become insignificant to the characters who use them as Christmas gifts and wrapping paper.

You can tell that Wernick, Rheese, and co-writer, David Callaham, had a blast exploring all of the fun and outrageous stuff one could plunder from the White House. In fact, Double Tap’s greatest asset is its embrasure of the alternate history in which the story exists.

For instance, Columbus reads a Walking Dead comic, but derides it as preposterous, while another character proposes an idea she had for a taxi app (a la Lyft and Uber) that the rest of the group simply scoffs at. Since society hasn't progressed since 2009, the screenplay has a lot of fun imagining how reality might have diverged if the world had ended a decade ago.

Those self-aware moments are no doubt a result of Wernick and Reese's time spent writing both Deadpool movies.

While it's great to be back with these characters, the electric chemistry felt in the original isn’t at full capacity here. Despite being an Oscar-winner now, Stone doesn’t feel like she’s firing on all cylinders. Breslin is pretty much a non-entity since she goes missing for most of the runtime. Only Harrelson and Eisenberg feel like the direct continuations of what came before; the repartee between the uncouth Tallahassee and the nebbishy Columbus is a real delight to watch.

The plot kicks off in earnest when Wichita (spooked by a wedding proposal from Columbus) and Little Rock (feeling smothered by Tallahassee’s fathering) decide to split for greener pastures, leaving Columbus and Tallahassee to mope around, taking segue rides around abandoned malls and debating the “Zombie Kill of the Year.”

Double Tap is a sequel, which means these meta kills get bigger and more insane with the use of wheat threshers and Italian landmarks.

After a month, Wichita decides to return, but not before Columbus sleeps with Madison (Zoey Deutch), a ditzy fellow survivor who’s been living in a Pink Berry this whole time. Despite her character inexplicably gaining some brains when the plot demands it, Deutch is one of the movie's real comedic assets, her radiant smile, and constant naïveté acting as a really nice contrast to the battle-worn protagonists.

Wichita is obviously pissed, but there are more pressing matters to attend to since Little Rock has run off with a Berkley hippie (Avan Jogia) to a pacifist community known as Babylon. Our heroes hit the road, traveling to an Elvis-themed hotel and contending with an evolved breed of zombies that defy the previous categorization. They're dubbed “T-800s” after the relentless killer machines from the Terminator series.

Rosario Dawson helps build out this world even further as Nevada, proprietor of the Elvis hotel, and a foil for Tallahassee’s “lone wolf.” Regular visitors to her establishment are Albuquerque (Luke Wilson) and Flagstaff (Thomas Middleditch), uproarious doppelgängers of Tallahassee and Columbus, whose arrival suggests a Rick and Morty-Esque dynamic happening all across the apocalypse.

Wilson and Middleditch are great, but since they're only onscreen for about 10 minutes, I wish their glorified cameos hadn’t been spoiled by the trailers.

All of the road-trippin' to a final zombie standoff at Baylon, but the climax doesn’t quite gel and would have been way more effective if the script made humanity the villain of the story. Had it been revealed that Babylon sacrificed certain members to “appease” the zombies at the behest of a deranged Manson-like leader, I think Zombieland: Double Tap would have had a better primary antagonist and a more well-rounded denouement.

Of course, that’s just my own opinion. Beyond that criticism, the sequel is a worthy follow-up that reminds us that the zombie wasteland doesn’t always have to be a bleak and depressing place. It’s not perfect, but there’s a lot to love, especially some great fan service and callbacks to the first film.

If Zombieland wanted to come back for the third entry in another ten years, you wouldn't hear any complaints from here.

And just when you think the film is over and won’t try to top the first movie’s famous Bill Murray cameo, it does just that. Make sure to sit through the credits, because Double Tap tells us what happened to the Garfield actor on the very first day of the zombie outbreak.

Two Ways to Rebuild Your Credit Score and Keep Your Soul