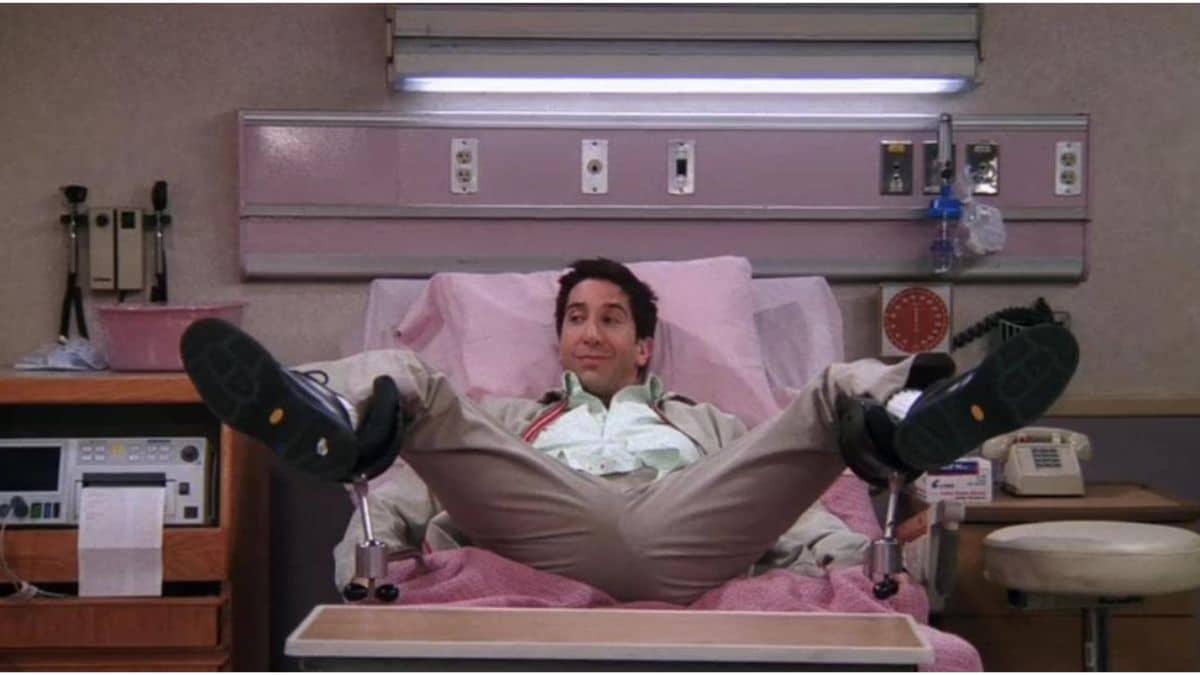 There's no contesting that Ross Geller (David Schwimmer) is the king of emotional tantrums and hilarious outbursts. Recently a Friends fan asked, “What is your There's favorite Ross outburst moment? One of mine is when Rachel's sister babysits, and Ross says, “Did she do this to her!” Regarding Emma's ear piercing.” Here are the top-voted responses from die-hard Friends fans.

10. The One Where Rachel's Sister Babysits S10, Episode 5

In “The One Where Rachel's Sister Babysits,” Rachel's sister Amy mistakes Ross for a guy she bought falafel from despite him being a constant in Rachel's life. She pierces Emma's ears without asking, and Rachel and Ross aren't happy. First, Ross exclaims, “No more falafel for you!” Then, he gives Rachel a look like, “Oh, don't worry, she knows what I'm talking about, and it's going to hurt.”

In “The One Where Ross Got High,” Monica learns that her parents don't like Chandler because Ross blamed the smell of weed on him in high school when he got caught smoking. Monica asks Ross to come clean, but he refuses, and she tells on him. So Ross has an outburst and screams, “MONICA AND CHANDLER ARE LIVING TOGETHER!”

In “The One After Joey and Rachel Kiss,” Rachel is trying to tell Ross about it, and he freaks out over a “Major shampoo explosion” in his suitcase. He says, “Oh, it's all over everything! Why? Why me? Oh, and this is moisturizer! It's even harder to clean!”

In “The One Where Rachel Has a Baby,” Rachel is frustrated women in labor are coming in and out of her semi-private room. She is desperate for it to be her turn while dealing with painful contractions. When the doctor checks, she is only dilated to three. Ross exclaims, “I'M DILATED THREE!” It's one of his funniest lines, according to Reddit.

6. The One Where Phoebe Hates Pbs S5, Episode 4

In “The One Where Phoebe Hates PBS,” Ross is calling all of Emily's family to get ahold of her after calling her Rachel at their wedding. When she finally calls, Ross excitedly says, “It's Emily,” before shoving a lamp at Chandler and shushing the gang.

After Chandler and Monica announce they are moving in, Ross invites Rachel to live with him. But when he realizes it would be difficult to watch her with dates, he changes his mind and tries to get Monica and Chandler not to move in together.

Ross says, “Fine! It's your life! I just don't want to see you guys break up! Which you will do if you move in together, but that's what you want. There's nothing I can do. DON'T DO IT!!!!!”

In “The One with the Proposal,” Ross goes to break up with Elizabeth, and there is a water balloon fight happening between her and the neighbors. Ross is pelted with balloons and screams, “Everybody put their balloons down. Now, this is a nice suit!” His delivery of the line and body acting is why this takes the fourth spot on the list.

“MY SANDWICH!” Ross is indignant about his boss eating his sandwich. He asks, “Did you confuse it with your OWN turkey sandwich with a moist maker?” Finally, he explodes, is given a tranquilizer, and is put on a sabbatical.”

DrKnowNout argued, “That was so warranted. Imagine not only being in a job with higher wages but also knowingly stealing a sandwich you knew wasn't yours. And not only that but admitting you threw most of it away.”

In “The One Where Rachel Tells…” Ross freaks out after discovering condoms are only 97% effective, and Rachel is pregnant after one night they spent together. Rachel expresses, “Ross can we forget about the condom for a minute?” Ross responds, “Oh well, I might as well have!!” His delivery is hilarious and, “I'm indignant as a consumer.”

In “The One with the Jellyfish,” Ross and Rachel are back together, but it doesn't last long. After discovering that Ross didn't read Rachel's letter, a fight ensues. “It was 18 pages FRONT AND BACK!” At the end of the argument, Ross pretends to cry before screaming, “FINE BY ME!!” It was voted Ross's number-one outburst in the series.

We hope you enjoyed this Reddit picks list of Ross Geller's best outbursts from Friends. Also, don't forget to check out the best and worst moments of Michael Scott from The Office.