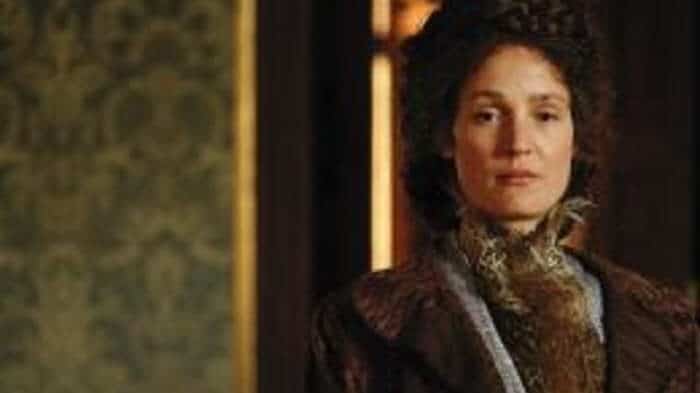 We are living in the age of the message movie, since not acknowledging the dumpster fire that is creeping ever closer to the door of even the most determinedly non-political citizen almost feels like naivete at this point. The problem is when a movie’s runtime is devoted to hammering it home over and over again at the expense of all else.

Many films seem dangerously close to believing that historical queens were incapable of serious political thought, but writer-director Marie Kreutzer seems almost to disdain all but the most personal of them in the TIFF film Corsage. Not that there isn’t plenty to be depressed about as the movie takes a long hard slog through the later years of Empress Elisabeth of Austria, who Vicky Krieps at least gifts with a vibrant inner life even as her outer one is determined to stunt her.

In Austria in 1877, the Empress turns 40 and is desperately trying to maintain her public image as one of the most beautiful, vibrant women alive. But as a doctor outright tells her, 40 is the average life expectancy for many of her female subjects, and she is well aware that she is expected to fade to irrelevance.

The real mystery is how the film seems to agree. The history of those who were born to an identity that didn’t involve being a white male is often how they found their agency despite (and sometimes because of) their willingness to uphold a stereotypical public image. In Corsage, that public image is a noose that Elisabeth was apparently unable to escape by any means. That includes any knowledge of the war being waged outside her bubble, any kind of goals that weren’t about maintaining her beauty, or much of anything in the way of sex.

That men would inform her of her intended role and the various ways she was failing it is a given, but why exactly would the movie give her so little to do? It’s hard to imagine that her lovers would cease being interested in her due to her age since the title of Queen alone would’ve been a draw for any man interested in conquests.

This vested interest in the self-denial of its protagonist ends up eroding anything that could be of interest about her, or even Krieps herself, as there’s only so much even an actress like her can do with such a repetitive approach that also eschews any sense of glamor. The mind tends to wander under such circumstances, and chances are it’ll head right back to Krieps’s breakout role, and how easy it is to imagine Alma as this Empress to a difficult man for whom poison isn’t an option.

If Corsage really wanted to be daring, it could not cry over spilled hair and give Elisabeth some gray ones, or spend more time in nature where the cinematography is bright enough to be of more interest than the drab royal environment.

The intent is obvious, but why Elisabeth has the freedom to flip off her husband and not indulge some basic curiosity about anything other than herself is an open question. If even the film can’t imagine the woman behind the image, why should we even be curious about her?

After premiering at the 2022 Cannes Film Festival, Corsage lands at select U.S. theaters on December 23.

We've got the latest on movies in theaters now.

The Revolution Will Be Orchestrated in the Stunning Musical Biopic ‘Chevalier’