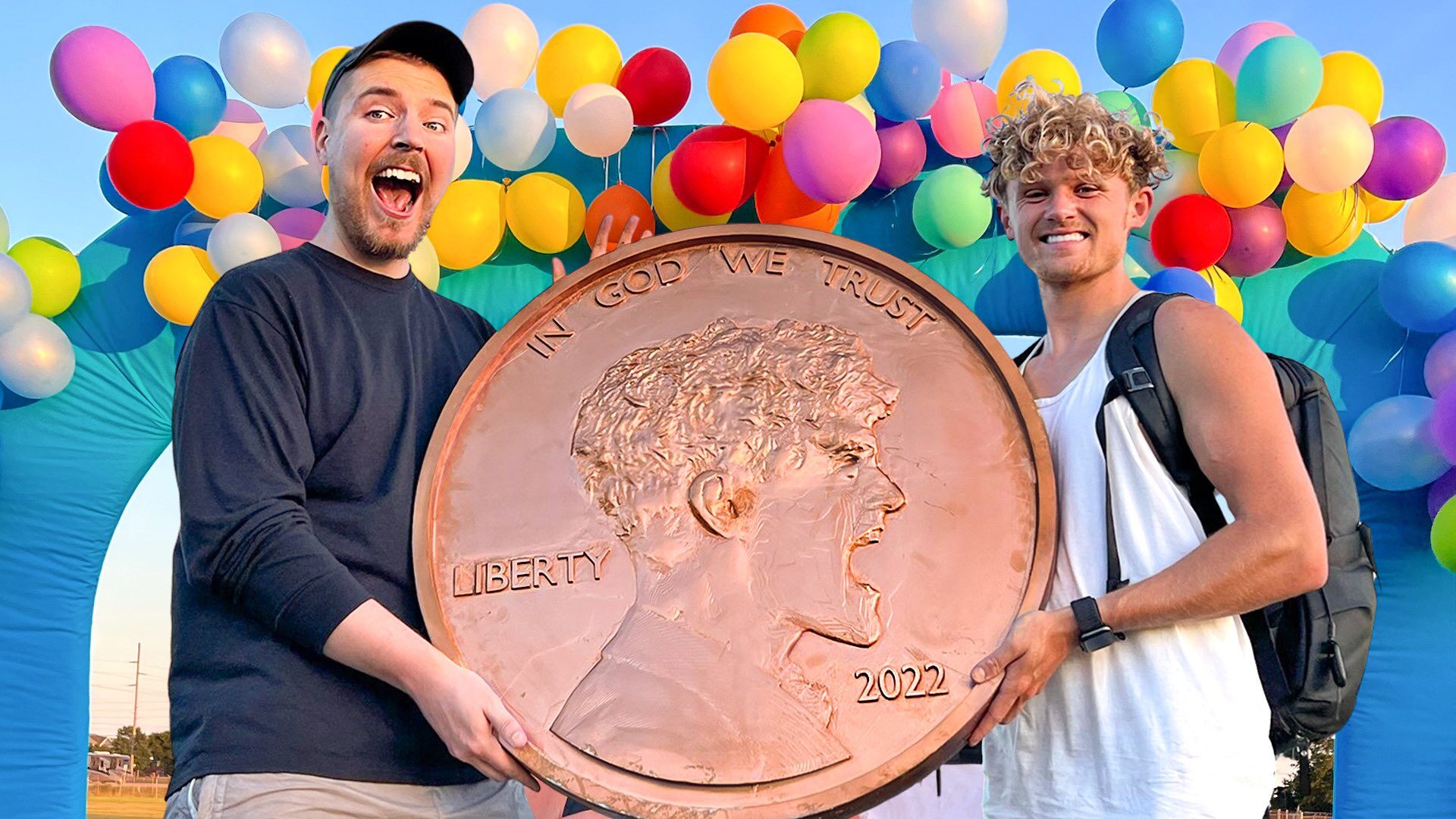 Ryan Trahan has been trending for the past month as he traveled across America to deliver Mr. Beast a penny. The true genius behind this man's content is how he has managed to merge two different YouTube verticals; the challenge video and the daily vlog format. Starting with 1 penny he worked his way up – meeting his challenge to buy plane tickets, bus tickets, a hotel room, and food and even managing to have some fun along the way.

If nothing else, the daily vlogs showed us how much you can achieve with a little bit of hard work, lots of good luck, and some smart business ideas. Ranked from least to most effective, here is every business idea Ryan used to survive on a penny for a month.

This is one of those money-making methods we all hate to promote because there are quite a few scams that exist out there. Ryan was able to earn about $20 from online surveys helping him escape THE GREAT RESET.

This seems to be the consensus with this particular money-making method. If you need a few extra bucks then it might be worth it. All you have to do is spend a few hours filling out forms and typing away. Maybe you can even attempt to become the world's first survey millionaire.

Unlike online surveys, golf ball hawking not only took him less time but arguably didn't make him the least amount of money. This method only ends up in second place because of how morally and legally questionable it is. Looking for golf balls during the day after you have paid to have access to the facility isn't considered illegal. Sneaking into a golf course at night, however, is technically breaking and entering. That is when we enter murky waters and start to question how ethical this method is as an income stream.

How much money can you make from golf ball hawking though? Turns out, it's a lot. Glenn Burgers made 15 million dollars, finding and reselling golf balls to the golf courses themselves. After cleaning and repolishing them he was able to sell balls that he found for free, for $1 each.

Ryan on the other hand made $30 from selling 8 balls, giving us an average price of $3.75 per ball. This makes him the technical winner in this method but he wasn’t as lucky when it comes to the next two.

This is one of those methods that didn't quite work out for Ryan. His advice: make sure you find a market before embarking on this particular endeavor. The lawn mowing business can be lucrative at scale earning you between $20 to $50 per lawn, or even more in the right neighborhood.

For true success, however, we turn to Christy Webber who turned landscaping into a million-dollar business. Her trick was also offering more specialized tasks, such as installing gardens, green roofs, and irrigation systems.

For Ryan, who had rented a lawn mower for a day, empty houses and stern no’s were what awaited.  He did manage to finally convince one person though and he provided the same service to a family who offered him a room and food. So all things considered it wasn’t a complete loss.

Like the previous idea, this is a business that only costs you a bit of time to start, a bucket and some water. Despite its relative ease, Ryan only found one client each for these two, teaching him a very important lesson in marketing in the process. You need to have a market for any business to be successful.

Seeing the sales he got with one of the final methods on this list, Ryan was sure that selling sodas would be the natural next step towards success. Unfortunately, it wasn’t.

Comparing sodas with this method we learn another marketing lesson. When you have an audience, you need to know and understand their needs. While people at beaches are thirsty and willing to buy a drink, a healthier option will likely sell more in a health-focused society, whilst sodas will sell more in a place that isn’t as focused on healthy living.

It’s no secret that drinks are big business but when you know your audience you can create and sell them a drink that’s right for them. This is something Logan Paul and KSI have done with outstanding success. Knowing their audiences' focus on high energy, they’ve been continuously selling out of their energy drinks within hours of launching. Ryan’s audience, the unsuspecting citizens of America were interested in an entirely different thing.

These two methods were by far the most entertaining and the most well received. Although these two were technically different jobs he did in different videos, the verdict when it comes to successfully growing them is the same; you need to become a content creator.

Whilst comedy and art are an important part of our society, unfortunately for many people, the ‘starving artist’ stereotype is still a reality. Drew Lynch and ZHC respectively have done a great job at growing careers in comedy and art through the YouTube platform.

Now Drew is estimated to have a net worth of three hundred thousand whilst ZHC is worth $3 Million. Becoming a full-time artist is undoubtedly the hard route to making money but this next method is perhaps the best for your mental health and pocketbook.

Dog walking, like pet sitting, still surprises me. Being paid to take walks and play with cute little dogs sounds like something out of paradise, a sentiment Ryan deeply agreed with as he started his mornings with a smile every time he had a cuddly friend to walk with.

At first, I was tempted to say there was no way you could make a sustainable income taking care of dogs, but to my surprise, you might be able to make even more than what a doctor earns in a year.

According to KevinMD, this is a serious switch some people are considering. Dog walkers who walk five dogs at $25 per dog earn $125 per day. Assuming a 35-hour workweek, the annual income is $45,625. Kristin Morrison is an example of someone who managed to retire a millionaire after just walking dogs her entire life. Now doesn’t that sound like the perfect career? Ryan and I agree.

If dog sitting was paradise, delivering food on a bike in scorching heat would definitely be the opposite. Yet this was a tried and tested method that helped Ryan secure most of his plane tickets and travel.

If you need some quick short-term coin this method might just be the one for you. Just how much money are we talking though? According to ZipRecruiter, Uber Eats drivers earn an average of $41,175 per year compared to DoorDash drivers' $36,565. We haven’t quite heard of any DoorDash or UberEats millionaires or billionaires yet making this next item the true winner when it comes to a solid business idea.

This is by far the simplest yet most effective method that Ryan used during his video series. He consistently showed us how you can use a $1 and quickly turn it into hundreds, but can you get rich just by selling water alone?

Zhong Shanshan, the 6th richest person in the world back in 2021, is a testament to the amazing hack that is selling water. He reached a net worth of $92.1 billion by selling bottled water. Believe in the method now?

Zhong, like Ryan, is known for his hard work, starting from being an elementary school dropout to becoming the business mogul he is now. After being a construction worker, a newspaper reporter, and even a beverage sales agent, he found his wealth in the world's most stable drink. A bottle of water. Ryan, however, found his biggest success in a different thing.

Being a Full-Time Creator

Through all the business ideas and money-making methods that Ryan tried, his biggest win was truly the YouTube videos themselves.

Following in the footsteps of creators like Mr. Beast and Mark Rober who pioneered the #TeamSeas and #TeamTrees initiatives he created this challenge in order to raise money for Feeding America. Through this 30-day challenge, he raised thirteen million nine hundred and six thousand eight hundred and ten (13,906,810) meals, which would have cost about 3 million dollars – in just one month! This shows the unprecedented power that content creation has. Need more reasons to start a YouTube Channel check out this article on why that might just be the best investment in your future.

Amanda is a Feminist, Tech-Entrepreneur, TV Producer, Freelance Writer & Author certified in Gender and Media and Digital Marketing with over seven years of experience working to develop and create various forms of content. She has been published by The Feminist Leadership Journal, Amaka Studio, Black Ballad, Document Women, In Her Words, Meeting Of The Minds, Africa80, and countless other platforms, dedicating her life to using media and tech to spread awareness and change lives.

In 2021, she self-published a book: At What Age Does My Body Belong To Me? and has since been developing It’s A Feminist Thing, a platform to showcase why feminism is the solution for a better equitable future.

Why Are Investors Buzzing About These 5 Stocks?