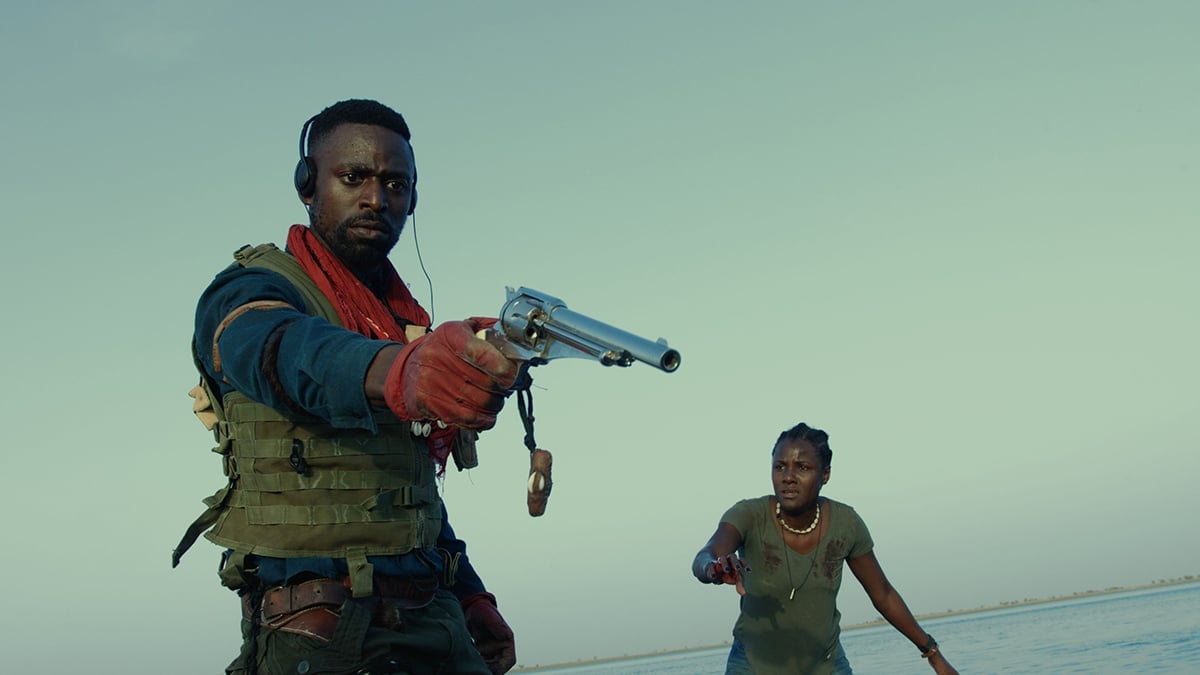 Saloum, the new film from writer/director Jean Luc Herbulot and writer/producer Pamela Diop, is a lot of things. It’s part spaghetti western, part devastating historical drama, and part supernatural horror movie. But what sticks out about it more than any of its component parts is how beautifully Diop and Herbulot weave these genres together to deliver something equally thrilling, emotionally resonant, and aesthetically accomplished.

From its opening moments, Saloum announces itself as a stylish film drawing on various genre traditions. The ominous music and voiceover narration that begin over a black screen before offering us visions of a gorgeous body of water reflecting the moon evoking ghost stories. The transition to a horrific, frenetically shot scene of three mercenaries making their way through the destruction of the Guinea-Bissau military coup in 2003 confirms that this won’t be a slow burn, though.

The astoundingly beautiful shots of the desert landscapes and coast set to Reksider’s spaghetti-western-evoking score lands the film firmly in the company of other recent international films like Marlina the Murderer in Four Acts and Five Fingers of Marseilles that use the aesthetics of classic spaghetti westerns to tell more culturally specific, modern, and socially-minded stories.

Leader Chaka (Yann Gael), fierce Rafa (Roger Felmont Sallah), and elder Minuit (Mentor Ba) make up Bangui’s Hyenas, the central trio of the film’s story. After collecting a drug dealer and his cargo from the chaos of Guinea-Bissau’s coup, the group of hired guns and dealer Felix (Renaud Farah) board a plane to make their way to Dakar. Things soon go wrong, though, they are losing fuel and won’t be able to make it to their destination, so Chaka decides that they will land in the Sine-Saloum Delta to fix their plane and refuel.

The Hyenas and Felix make their way to a resort where travelers do chores instead of paying for their stay (which Rafa is not happy about). They plan to take a few days to relax, get some fuel, fix their plane, and continue to Dakar. Unfortunately, the idea that they could relax goes out the window when a young deaf woman recognizes them and threatens to expose them. Relaxation becomes even more of a pipedream when a police captain arrives.

Things remain calm for a bit as the Hyenas mingle and attempt to get through the day without any violence or danger, but their arrival in Saloum may not have been an accident, and soon chaos erupts around them once again.

As the film goes on and devolves into a unique, regionally-specific folk-horror story, it’s not always easy to keep track of what is happening. It’s unclear if this is only true for viewers not familiar with local myths (like me) or would be true even for viewers who have grown up with the stories the film draws from. But it doesn’t matter.

The film is so energetically paced and shot that whether or not you can follow exactly what is happening and why the horror and adrenaline of the characters are infectious. The fact that these characters are also so well drawn by Diop and Herbulot’s fantastic, economical script adds an emotional component to the excitement. Along with lending stakes to the violence on screen, the emotional core makes the film’s interest in the trauma and history of its characters all the more affecting.

Saloum is undoubtedly a genre film; it’s incredibly stylish and full of plot points that we’ve seen in other revenge westerns and horror movies. But it uses the cinematic grammar of those genres to delve into the historical horrors experienced by the people of the coastal African countries of Senegal, Gambia, and Guinea-Bissau. In melding the western and horror genres, the film avoids the trap many more allegorical horror movies have fallen into in recent years: it doesn’t over-explain itself.

The thrills keep things moving at all times and allow the moments of historical horror to become a part of the narrative instead of the movie functioning as a symbolic parallel to real horrors. The mixture of human and supernatural horror means Saloum can have its cake and eat it too. It manages to be a powerful film about actual events but doesn’t sacrifice any of its stylistic excesses in the process.

Saloum has a limited theatrical release at the Alamo Drafthouse in Los Angeles and the IFC Center in New York this weekend before debuting on Shudder on September 9th.

Bookmark here to keep up with all the latest movies in theaters now!

Top 15 States Where Female Entrepreneurs Are Likely To Win Investments

How To Make Money Fast: 18 Creative Things To Try