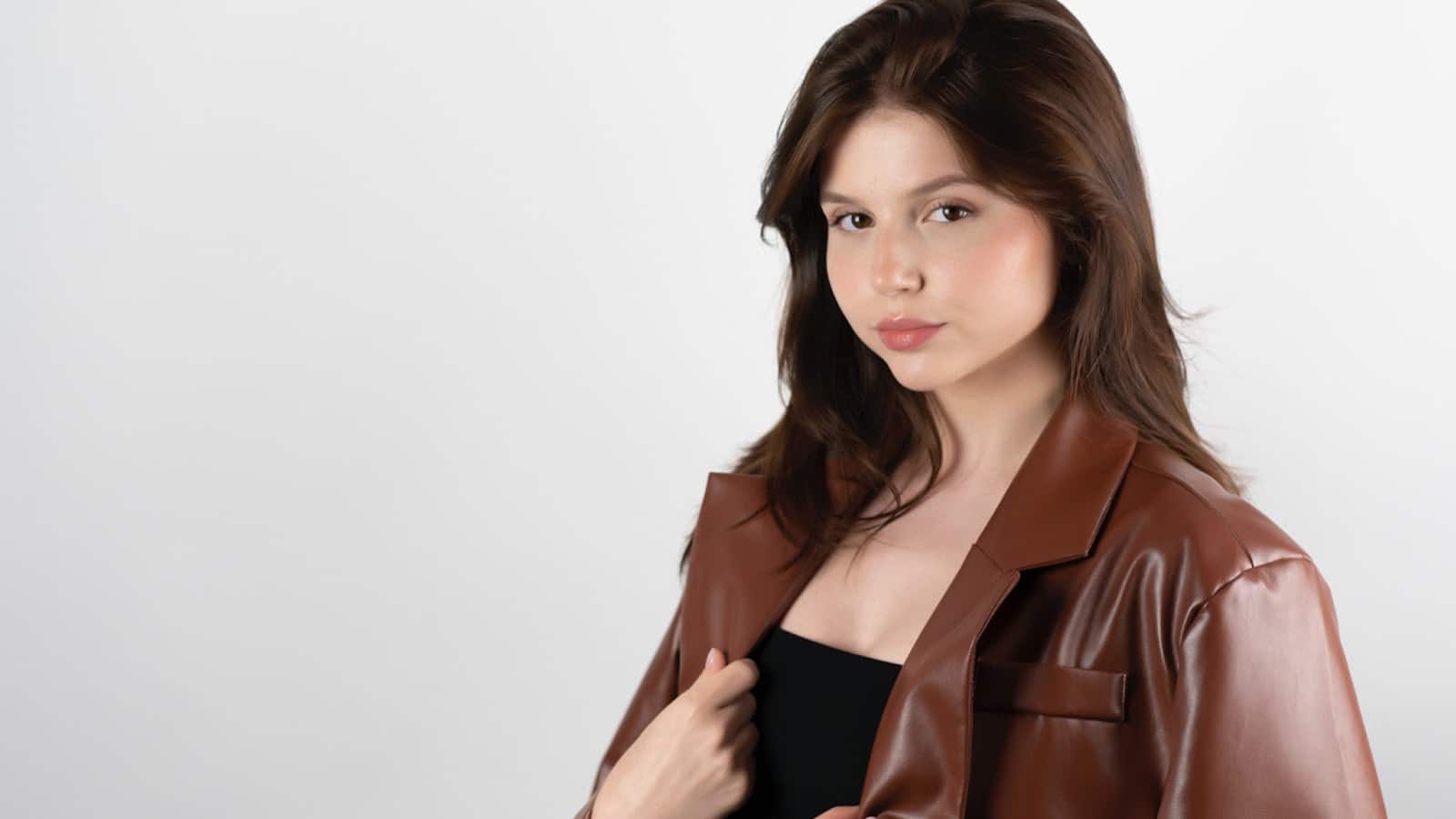 Emerging star Samantha Blaire Cutler joined Wealth of Geeks to discuss her lifelong career in the entertainment industry. At age nine, she performed on the national tour of Billy Elliot the Musical as a professional actor, traveling the United States, Canada, and São Paulo, Brazil, for three years.

Today, Samantha is landing roles left and right in shows like Ghost: Power Book II, which returns for its third season in 2022, and Ryan Murphy’s new Netflix show, The Watcher. Samantha’s dedication to her craft and ability to portray a diverse range of characters is part of what makes her such an asset to the entertainment industry.

How did you get into acting at such an early age?

I started everything through dance. When I was a little girl, I begged my mom to put me in ballet classes, and she did when I was about three or four. I got into this dance studio that did singing, acting, and dancing. I fell in love with the whole thing. And so when I was probably six or seven, that’s when I started auditioning at professional theaters in the area. And soon, it became my whole life.

When I was eight, my mom saw an open call in New York for young girls and dancers for Billy Elliot the Musical. So we went, and there were like 400 girls at the open call and, um, went back and forth a couple of times and then landed a background role in my first professional show at nine years old. So I went on tour at nine, leaving home. It was crazy! But before I left, my mom made me think about it, and I never changed my answer. I was just like, I have to do this. It’s what I love to do.

What was your experience like traveling the world and performing in Billy Elliot the Musical at nine years old?

I originally started as a swing, which means I covered for other girls, and we toured all over North America. We went to Brazil and all over Canada too. It was the craziest three years of my life. Thankfully the show had so many other kids. There were about twenty kids between eight and sixteen years old.

A lot of shows only have two to three kids, so I was lucky to have a whole group of kids around. We became friends, and it basically felt like middle school. I’ve been to almost every science museum across the country. We got to have a lot of really, really cool experiences together.

I mean, the tour was stressful. It was hard work. I cried many tears, but as soon as I got on stage, to be able to do what I love eight times a week for audiences all over the country was unbelievable. And it truly changed my life. I wouldn’t have moved to New York, and I wouldn’t be living the life I live today without that opportunity. So I’m very grateful for it.

Balancing Life as a Professional Actor and a Student

I heard that you’re currently enrolled in the Berklee Online Music School. What are you studying?

I graduated high school at sixteen, and I started working professionally afterward. Right after graduating, I was one of the vacation understudies for Dear Evan Hansen on Broadway. I tried to go to school during that time, but it just didn’t work with the performance schedule. But during the pandemic, I didn’t have much to do. And I was like, “Well, maybe this is the time I go back to college.”

I’ve always been a singer, but I didn’t have much music theory or technical training besides voice. So I enrolled in the Berklee Online Music School, and I’m doing their interdisciplinary music studies major. It’s kind of like a create-your-own-major type of thing. Um, yeah, so I’m a part-time student there. I’ve learned so much about music that I could never have imagined.

How do you balance your professional acting career while pursuing your education?

I take it semester by semester. Sometimes I take three classes, and sometimes I can only take one. This past year was interesting because we filmed Ghost from January through the end of July, so I knew I would be busy a lot of that time. And so, I knew I didn’t have as much time to dedicate to school, but I still took one or two classes. For me, it’s about emailing my professors ahead of time and saying, “Hey, I’m going to be on set for fifteen hours. Can I please have an extension for this assignment?” Thankfully, they’re really understanding about it.

I’m grateful that I’m in the online program. There’s a lot of waiting time on set, so I’ll be in my dressing room, and I can get a couple of assignments done and maybe even go to a Zoom class. There are actually a couple of other people on the show who are enrolled in school. We’re all just trying to make it work.

Samantha’s Insights on Her New Series: The Watcher

Can you talk a bit about your character, Patricia Graff, in the new Netflix show, The Watcher?

Yeah, so I play Patricia Graff, a typical 17-year-old girl who thinks she knows everything but doesn’t, which can cause some issues with her parents. She has a very strict father. She’s just doing her thing, trying to have independence and getting into some trouble that might not be so great for her family.

What was it like to work with Ryan Murphy?

Being directed by Ryan Murphy was such a crazy amazing experience. I was a huge Glee fan growing up and got into American Horror Story later. He didn’t direct all the episodes of The Watcher, so I was even more grateful that I got to work with him.

I was definitely nervous and, on the inside, freaking out a little bit, but I tried to keep it professional and cool. The actor who played my father was the original director of Wicked the Musical on Broadway. That was one of my favorite shows as a kid. Getting to talk to him about that and telling him how I used to sing “Defying Gravity” on the way to school.

We shot at the new Netflix studios in Brooklyn, and they were beautiful. They built a real house that was fully replicated on the sound stage. So just being able to be fully immersed in that environment was amazing because you don’t always get that.

What do you hope viewers will take away from The Watcher when they see it?

If I’m talking to an audience of younger teenage girls about my character in particular, it would be to listen to your parents, don’t do stupid things, and remember that your parents do, for the most part, have your best interests at heart.

For the show in general: I got the chance to look at some of the monitors, and the cinematography is just so beautiful. We did a lot of extreme close-up shots, and there were some scenes with mist and fog. It gives you those American Horror Story vibes, but it’s rooted in reality because the show is based on a real story. So the horror is almost scarier because this could happen to anyone.

How has your character, Becca Weston, changed over the course of the series? What does that mean for you as an actor?

I’ve never gotten to develop a character for this long, you know, over three seasons. And so it was really cool to get the opportunity to figure out who she is. In the previous two seasons, Becca is mostly with her family. She’s stepping out a little bit on her own this season, so that was really fun to get to play and explore with.

Becca’s a little bit of a party girl. She comes from the Upper East Side. At first, you can see she’s the girl with all the money and can get whatever she wants. And now it’s been cool to see how she wants to step out on her own and develop her own life outside of her family’s wealth and their name because their name is very prominent. It’s been rewarding to see Becca stepping outside of her privileged bubble and getting to see other people’s experiences.

How do you stay motivated in such a cutthroat industry?

It’s not easy. I’ve been doing this since I was nine, over half my life. Sometimes I feel like I’m in my thirties because most people haven’t been doing this for over a decade at my age. I’m very grateful to have the castmates that I do. We are such a close family, and there are so many people who just want to help each other.

It’s a very isolating industry, especially for actors in this day and age with the self-tapes and, you know, not getting to be in the room with casting directors, directors, and producers. I really think it’s about committing to the story and committing to what we can control.

There are so many no’s in this industry. There’s so much waiting, not getting the things you want, and not having stability. But to be able to do what I love in this world and to do it as a job — there’s no better thing. That’s what keeps me going.

Can you talk about your role models who inspire you to keep persevering as a professional actor?

I admire actors like Florence Pugh, who are such shapeshifters in their roles. She can play a Russian spy in Black Widow and be Meg in Little Women. I love that she really disappears into her roles. I would love to play more characters where it’s like, you’re watching, and you’re like, “Wait, I think I’ve seen her, but I don’t know.” I like being a little anonymous.

I don’t know if you know this, but I’m from the same place as Jennifer Lawrence. We have so many things that are like one degree of separation. Our moms went to college together, and I went to her family’s summer camp. She’s also one of those people I really admire because she lets her work speak for itself and keeps her private life private.