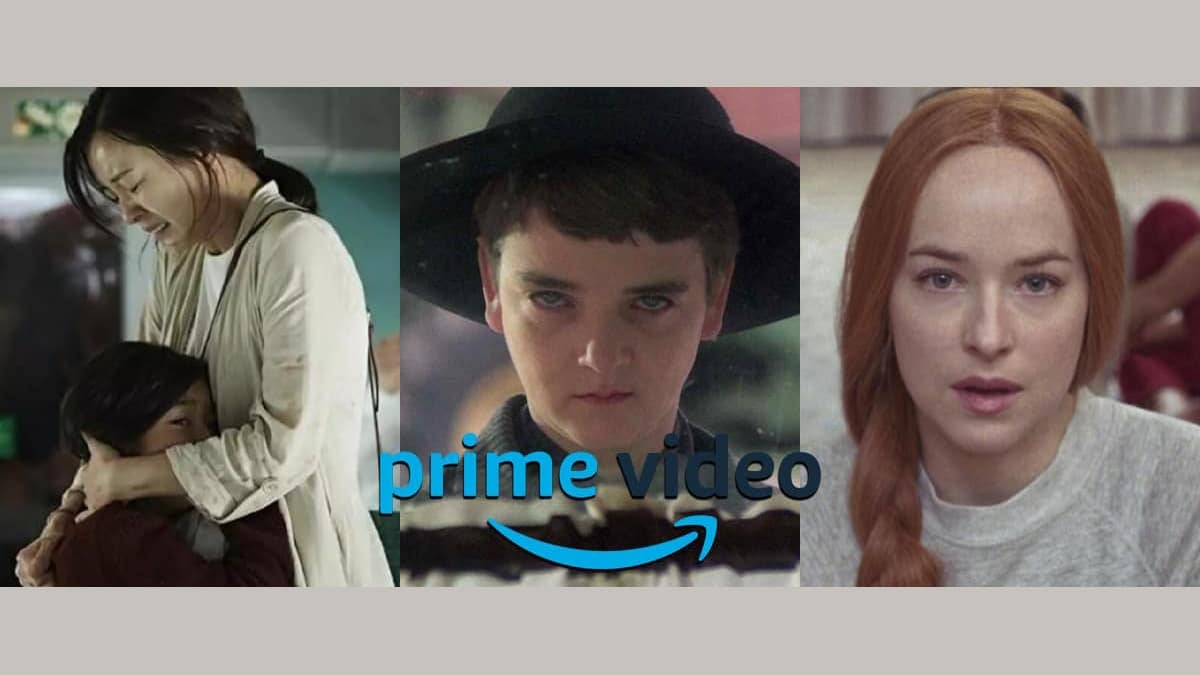 Amazon Prime Video’s horror section isn’t its most robust feature, but there is still a very strong presence when it comes to horror films across the decades. Throwing in a little bit of the old alongside the new makes it an underrated platform for fans looking to catch up on some scares, as well as sporting some of the all-time classics that anyone new to the genre would have on their must-watch list. While we’re looking forward to it developing further, these are some of the creepiest, cringiest, and outright scariest the service has to offer.

When a chemical spill causes the zombie apocalypse to break out, passengers on a train from Seoul to Busan are trapped in different compartments as the other cars quickly fill with zombies. Every time the train stops, they are besieged by new undead, even at supposed safe zones. Separated from their friends and family, the group desperately tries to reach the other survivors, and a lot of them don’t make it to the end of the film. The zombies here are among the scariest in recent memory, and the fast pace, social commentary, and solid characterization makes it feel like a season of a TV series packed into a feature-length film.

Free with ads on Amazon Freevee

Home invasion is one of the scariest things that could possibly happen to a person, and the horror genre is rife with stories based on the terror that comes from being caught off-guard by an attacker. Subversions to the trope are always welcome, which is why The Collector remains such a great movie. In an attempt to protect his wife, the groundskeeper for the Chase family plans to break in and steal a single item to help her make her payment to a loan shark. However, when he arrives, he discovers that someone far more dangerous has already set their sights on the home, forcing him into a fight for survival along with the family he intended to betray.

The original Suspiria is considered one of the classics of the genre, which is why the prospect of a remake brought with it a level of apprehension from fans. The way the film managed to undermine that was by creating a totally different film, sharing similar aesthetics and atmosphere but existing very much as its own thing. There’s no question that this is a polarizing entry, but there is a lot to unpack in its scenes which heightens its rewatch factor. Its lean into the perfectionism demanded of students of many vocations creates an upsetting and surreal backdrop that manages to still pay some fanservice by including easter eggs and a delightful if brief cameo from the star of the original film, Jessica Harper.

Fans of the Scream franchise may find interest in the movie with an opening sequence that went on to inspire the iconic intro of the 1996 film. Yet, When A Stranger Calls is a unique movie. While Scream used its opening scene to embrace horror tropes, Stranger seems to eschew them at every turn. Featuring an underrated performance from the great Carol Kane, the story begins with the babysitter tormented by a mysterious caller only to switch tracks twenty minutes in to focus on the life of her tormentor after he escapes from prison years later. Never sympathizing with him but likewise failing to fully condemn a man created very much by an uncaring society, the movie is often criticized for going off the rails, but for some, that is its strength. In conjunction with its highly underrated sequel When A Stranger Calls Back, the story thrives as a commentary on the long-lasting effects of trauma. The inferior 2006 remake is also available to stream for free on Prime Video

Clive Barker’s Hellraiser is one of the most influential horror films ever, and it has a pending HBO Max TV series that will see his return to the franchise after it fully flew off the rails for a long while – sadly, including the most recent entry in theaters. That means there’s no time like the present for a first viewing or a rewatch of the film that gifted us with the Cenobites. Often reduced in the popular imagination to being a movie about a guy with a bunch of pins in his head, this movie gave us one of the most interesting among the final girls with the fast-thinking Kirsty Cotton and an excellent supervillain with her stepmother, Julia. Hellbound: Hellraiser II and Hellraiser: Judgement are also free to stream on Amazon Prime Video.

A couple traveling through rural Nebraska hits a small child as he runs out from a cornfield, confused by the circumstances but not understanding that the kid was fleeing for his life. They go to town to find help, but it seems abandoned. Attempting to fuel up only to be refused by an attendant, it becomes clear that there’s something gravely amiss. Even at that, a corn-worshipping cult full of children that murdered all the adults in town probably wasn’t on anyone’s bingo card, so the couple spends much of the movie completely out of their element. That sense of unspoken terror is a major part of why this is such a widely influential film. Moments of low-budget cheese aside, the creepy premise and performances are what holds the story together.

When a detective is sent to a small town in South Korea to investigate a series of murders, he has no idea what kind of supernatural horror he’s getting himself involved in. As he attempts to save his daughter’s life, he comes up against a plague that seems to turn people into murderous monsters. The Wailing is sometimes funny, sometimes brutal, but it excels by leaning away from moralizing. Presenting a series of highly flawed characters that are doing their best in unreal circumstances, the best part of the film is the way it refuses to grant anyone a no-strings-attached happy ending. Ruminating on the kind of evils that can’t be quelled by a good guy in a cape, The Wailing is one of the best horror movies ever made, but it’s not an easy ride.

Luke is a shy kid who befriends the much more confident Daniel in childhood. Dismissed as an imaginary friend, Daniel is initially helpful but ultimately demands that Luke do increasingly bad things. Temporarily locking him away when he gets out of hand, Luke inadvertently frees him only to see Daniel gain the ability to take over his body and control him. Utilizing the classic fear of lack of possession to tell a story about a troubled, lonely young man, this is one of the better horror films released in recent years.

The films of producer and director William Castle are generally known for their marketing gimmicks, but that’s not to say his films were completely without appeal for more serious horror aficionados. Rating high among his filmography is House on Haunted Hill, which takes the concept of a group of people spending the night in a famously haunted house to a new extreme. Brought together by a wealthy man who dares the group to stay by offering them a large sum of money if they make it through the night, this film leaned into the schlock by incorporating carnival standbys like fake skeletons and optical illusions to deliver real scares. You can enjoy the classic black and white or a colorized version, and if you'd like to enjoy a different aspect of the films, the folks behind MST3K also have a Rifftrax live commentary of the film on Amazon Prime Video.

The teenage Laurel moves to LA, rooming with her more-or-less estranged brother Mark. On her first night in town, she ends up smack dab in the middle of vampire drama when she meets a girl gang that ushers her into their crew. Undergoing many of the same coming-of-age problems that anyone deals with only vampire-style, Laurel has to figure out how to go her own way. Though admittedly more a comedy than a straightforward horror film, this still has some worthy scares.

The bullied Oskar meets Eli, who has the appearance of a girl about his age. As the two form a tender friendship based on mutual support, Oskar realizes that there is a lot more to Eli than he initially thought. A vampire who can never age, Eli alternately disturbs and intrigues Oskar. Together, they form one of the strangest and most endearing friendships in horror history.

This is a lesser-known gem, but it’s a surprisingly brutal one. Opening on a traveling photographer who is beaten and set aflame by locals, the story then pans to a detective working alongside a coroner-mortician to solve a series of murders. With his wife acting increasingly strange, the detective hits a number of brick walls as he tries to understand what’s happening. Graphic and gory, this is not for the faint of heart, but it’s a lot of fun for fans of the bleaker side of the genre.

Black Death takes it back to medieval England to a countryside ravaged by the plague. An idealistic monk joins a group of soldiers to investigate a remote town that is rumored to be unaffected by the plague. Along the way, they witness endless horrors. Throughout the ongoing pandemic of the last couple years, this movie has become only scarier as the theoretical abandonment of people in need that the film presents has an uneasy echo in modern times.

Filmed at night on the same sets with much of the same crew as King Kong, this is a movie in which the monster is man. A big-game hunter is apparently the only survivor when a boat he’s traveling on capsizes. Believing himself fortunate when he finds himself washed ashore on an eccentric millionaire’s island, he quickly learns that’s anything but the truth as he learns that man is “the most dangerous game.” This story has been referenced, parodied, and remade many times over, but the original still serves substantial chills. The Quibi-sized TV show based on the same Richard Connell short story is also streaming on Amazon Prime Video.

Of all the many genres of fiction, few grapple with grief and trauma head-on in the way that horror does. Among the countless examples of this, Woe is near the top. Led by great performances, the story tells of two siblings suffering the recent loss of their father. Both stressed and disturbed generally, the death in their family has only served to further isolate them both. Feelings of repetition and mundanity haunt the siblings and trap them in a loop, which reflects the way days can blend together when suffering emotional fallout from a great loss. All the while, they’re stalked by Death themselves.