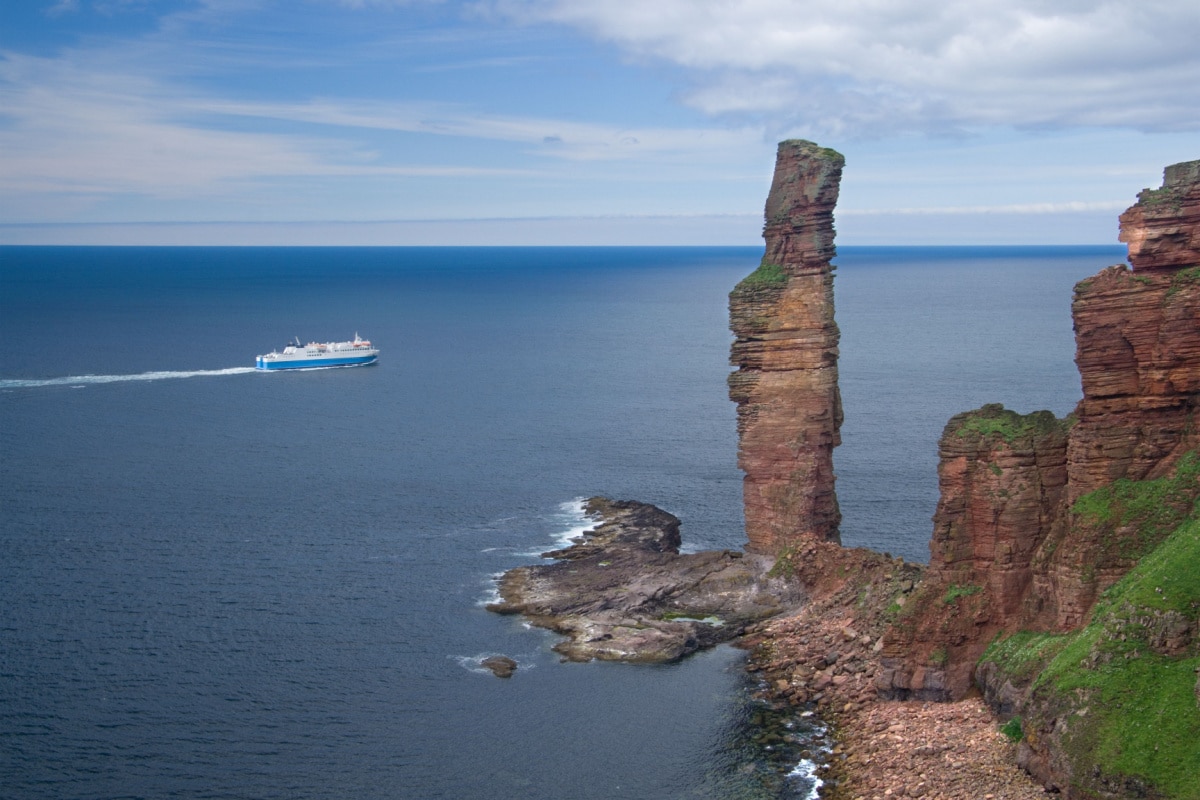 According to an expert, the tide may soon wash one of the unique natural structures in Scotland's Highlands into the sea.

Many sites make the Scottish Highlands like nowhere else on Earth, but one of them may soon disappear thanks to the nonstop beating of the frigid arctic water. The Old Man of Hoy, off the coast of Orkney, is worthy of a place on any itinerary if you visit Scotland soon.

The Old Man of Hoy is a vast, giant-like sea stack off the coast of Orkney in Northern Scotland. It is the tallest sea stack in the U.K and was created relatively recently in the 18th century. It stands at 449 meters or 1473 feet. It seems to be looking down at the mainland it faces. Many think the enormous stone sea stack will soon fall into the sea.

Professor Jim Hansom recently told the Scottish Express that the stone structure could “cave in at any time.” So if you want to see the impossible-looking sea stack for yourself or even scale it, it might be time to plan a trip to the Scottish Highlands and make it a goal this year.

Many have scaled the Old Man since it was first conquered in 1966, including an eight-year-old boy, Edward Mills, who climbed the giant in under five hours in 2018.

How To Get to the Old Man of Hoy

The Old Man of Hoy is located just off the coast of Hoy Island, which is part of the Orkney archipelago. You'll need to wake up early for this day trip!

Two routes from the Scottish mainland to Orkney require a ferry ride:

From St. Margaret's Hope, you need to travel to Houten, which has a ferry to Hoy. However, the walk across Hoy is also longer if you go this route.

You can get a boat to Hoy Orkney Terminal from Stromness. Make sure you pack well; it gets cold and wet up there! Then, after a five-mile hike, The Old Man of Hoy will come into sight.

Ten More Things To Do in Scotland's Highlands

1. The Heart of Neolithic Orkney

Hoy is just one of the small islands off the coast of Orkney. But Orkney, off the north coast of the highlands of Scotland, is host to some unmissable sights. The heart of neolithic Orkney, a group of four sites, is the most popular.

The neolithic Celtic peoples of Orkney built these massive stone monuments over 5,000 years ago. They survive as some of the best examples of megalithic architecture anywhere on Earth.

Maeshowe looks like a small grassy hill from the outside, but within it is a long corridor that opens up to a grand chambered tomb or cairn. The passage was created from colossal sandstone slabs weighing up to three tons. It's a feat of both strength and design.

The sun's rays shine directly down the passage during sunset on the winter solstice each year.

Few sites are as eye-opening as Skara Brae to look into the everyday neolithic lifestyle. It is a village settlement consisting of ten entire interconnected houses. The stone slab houses still contain furniture and flushing toilets used by their owners over 5,000 years ago.

The Stones of Stenness

You've heard of Stone Henge, but did you know that it isn't the only henge in Britain? Henges were built across neolithic Britain, but the earliest henge was at Stenness.

It was built around 3100 B.C. The 6m tall stones (nearly 20 feet) of Stenness are vital evidence that seafarers imported henge culture to Britain via the Orkney Islands.

The Ring of Brodgar

The Ring of Brodgar is an enormous 104-meter (or 341-foot) circle of stones within a wide dugout ditch. The site is still yet to be excavated, so no one knows how old it truly is.

The highlands, the most extensive whiskey-producing region in Scotland and the world, currently houses 39 distilleries. Today's whiskey-makers continue a history dating back more than 500 years.

The Whisky tour in Inverness is a great place to start your Scotch spirit journey. After visiting a distillery and drinking a dram or two, you'll go home to a connoisseur.

The name Glenfinnan Viaduct may not be familiar, but if you're a fan of the Harry Potter movies, you will no doubt remember the high bridge that the Hogwarts Express crosses.

The Jacobite Train runs two daily roundtrip journeys on a single track, from Fort William to Mallaig in the west highlands. This means you have four opportunities to see the magical crossing each day. If you want to make the most of the few seconds the Jacobite Steam Train comes into view, you'll need to arrive early, climb one of the nearby hills and get a viewpoint above the tracks.

Crowds will form as buses bring in tourists to see the famous engine. Most tour buses don't arrive early enough to allow time to climb up very far, so with some planning, you can get a perfect picture with no one else in the frame.

Lakes are called lochs in Gaelic; Loch Ness is the most famous lake in the world.

Most have heard stories about Nessie, the mythical Loch Ness Monster. Scientists continue to debate the possibility of Nessie's existence. A recent discovery of a plesiosaur in Morocco has scientists more confident that a colossal monster could live in the depths of Loch Ness' freshwater.

You'll find Loch Ness in the northern highlands, where there are plenty of things to do around the lake. This includes the expansive grounds and ruins of Urquhart Castle.

If you prefer hikes, try the ultimate Loch Ness experience: the 350 Trail. It's a six-day, 80-mile footpath around the lake. Perfect for walkers, you'll see castles and canals and have plenty of time to scan the surface for signs of ol' Nessie.

The Highland Games are over 1,000 years old. Clans pit themselves against each other for glory.

The Games run throughout the summer months across the Scottish highlands. Expect to hear bagpipes, see the highland dance, and wear a Scottish tartan and kilt. Most games are single-day events, so you can schedule more than one if traveling around the area.

You'll find food and activities like a state fair at any Highland Games events, with the main event being the games themselves. You might be unfamiliar with some events and, as a result, be surprised that Olympic events – like the hammer throw and shot put – were initially Highland Games events.

Events you won't want to miss include:

Eilean Donan Castle in the northwest highlands is a picturesque fairyland that comes to life. Initially built in the 13th century, this medieval castle on a small island is now a monument to the history of the highlands.

If you want to come away from Scotland better informed of its history, including the Jacobite uprising and the struggles against the English, Eilean Donan Castle is a must-visit.

Additionally, if you want to come away with an Instagram shot like no other, you'll find that here too.

For Scots, there's no better escape from the wind and rain than inside one of the inland stone-built highland pubs. You'll drink in some authentic highland culture as you share a swallie (drink) with the chookters (Scottish highlanders.)

Even the most introverted extrovert will have a good time with the live music and dancing.

It's the best place to find quality traditional kilts, learn about the battle of Culloden and the history of Scotland, and visit the oldest bar in Inverness, called Gellions. Inverness also hosts a traditional Victorian market in its old town, which offers insight into Victorian Britain and the opportunity to find souvenirs.

Haggis is the quintessential highlands dish; you can't leave Scotland until you have eaten this spiced lamb wrapped in a sheep's stomach.

It may sound awful (and honestly, it doesn't look all that appetizing), but haggis is nothing more than a lamb sausage. Be sure to order it with neeps and tatties (turnips and potatoes).

The highest mountain in the U.K. is in western Scotland in the Scottish Highlands. Of the three peaks in Britain, Ben Nevis is the most significant and most challenging climb. However, that doesn't stop thousands from completing the three peaks challenge every year of summiting the three highest peaks of Scotland, Wales, and England (Ben Nevis, Scafell Pike, and Mount Snowden.)

Anyone with a reasonable fitness level should be able to walk up and down majestic Ben Nevis in about eight hours. Of course, those more interested in the views than the hike can take the cable car for a breathtaking gondola ride with beautiful scenery.

It's estimated that 25 million Americans are children of the highland nation. Though your day-to-day reality is likely wholly different from your ancestors who battled cold winds and harsh terrain in daily life on the edge of the arctic circle, why not reconnect with them?

Get in touch with your ancestry by rediscovering the highland tartans and Gaelic language, and go to Scotland before it's too late!

Originally from the U.K Greg has lived in Asia for over 15 years. Fluent in a handful of languages, he ran a management consultancy before creating Face Dragons, he spends his time traveling around Asia, writing, taking photos, and drinking coffee.

7 Stocks To Avoid This Fall