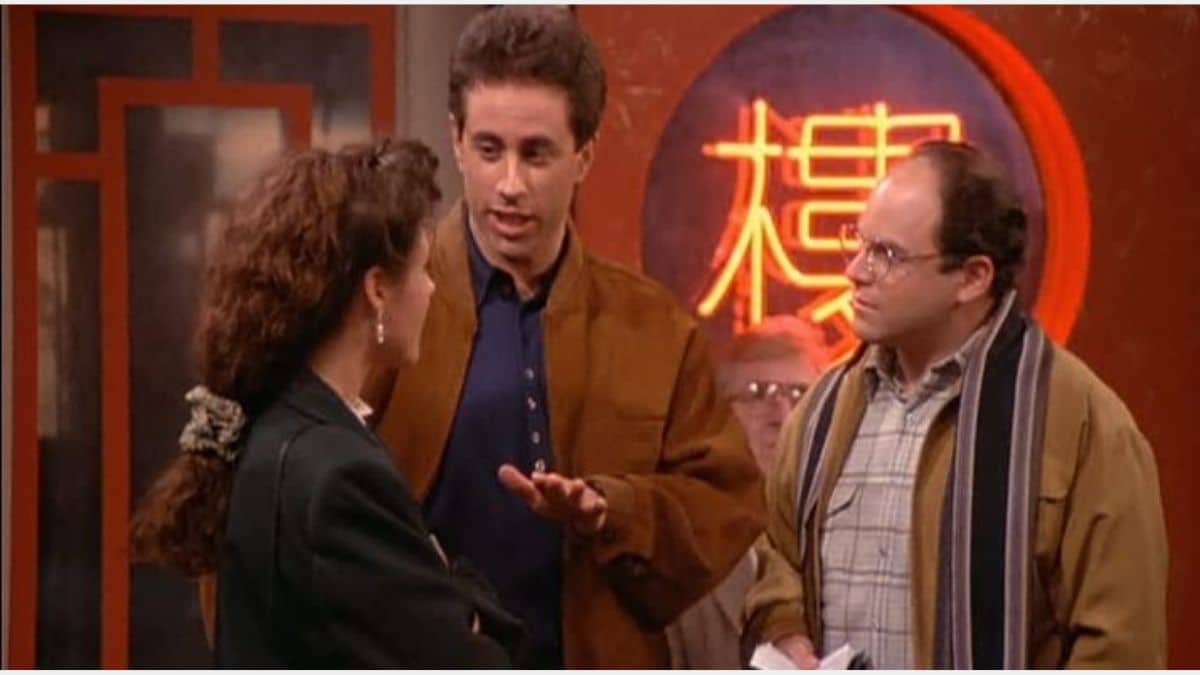 Redditor u/MadDogTannen inquired, “If Seinfeld were a video game, what would some of the levels be? Here are some of my ideas, but I'd love to hear yours.”

Other Seinfeld fans weighed in to create this list of ideas for levels if they made a Seinfeld video game.

Celticdouble07 elaborated, “You must drop off muffin stumps at different dump sites before your time is up. But you can't drive too fast or crazy because the bus passengers will throw up their pizza/bagels/donuts/pound cakes.”

Clerk18 admitted, “I would love a Chinese restaurant puzzle room. Where to get out, you must perform the correct combo of talking to your party/ host/ phone call to be let out. Something similar to a Little Nightmares level. Cartwright? Cartriiiiiight!”

In the one with the race, Jerry is dating Lois. He loves it because Superman is his favorite. Redditor actualelainebenes answered, “Racing against Duncan Meyer.” Another user, hilly316, added, “Lois exclaims, race him, Jerry. Race him! What do you do? Press X. = I choose not to run! Press Y = alrighttt, the race is on.”

Par4Course36 nominated, “A wrestling contest over the loaf of marble rye.” Xyeeyx added, “There would be different stages of the boss fight: The old bag, racing to the apartment, tossing the rye, baiting the rye, reeling in the rye. Also, there's a time limit based on the handsome cab's arrival, and you can never win.”

Ween_ween volunteered, “Defeat all the children of the dojo individually and then as a group.” Litlegoblinjr added. “Then defeat the group of the walk participants.” WarthogMysterious418 continued, “You have to throw ribbons at them.” Finally, rakugaki_raijio said, “You know what you are? You're a ribbon bully.”

A Frogger Level where you play Frogger with the Frogger arcade game similar to how George Costanza operated would be fun! Of course, the episode “The Frogger Game” was the one where George wanted to preserve his high score and arranged to move the game without losing power.

Lewkatz had the most elaborate idea, “A Mario -style game in which Elaine must dodge obstacles (watch out for the Sidler, Eddie Sherman, and Joe Davola!) to reach and rescue J. Peterman. You collect ivory buttons and dropped items along the way (the urban sombrero, a Mongolian horse-hair vest, a sable hat, and Edward VII's wedding cake).

They continued, “The final boss is none other than Sue Ellen Mischke. After calling off her wedding with Pinder, she absconded to Myanmar (Burma). She stumbled upon J. Thinking he and Elaine are in a relationship, Peterman decides to ‘steal' him for herself. During the battle with Sue Ellen, she throws O Henry bars to give damage. The only way to defeat her is to put the collected clothing items on the bra-less wonder before giving her the cake as a – wedding gift.”

Finally, they concluded, “In a post-credits cut-scene, we see a flashback to J. Peterman riding in a rickshaw in Rangoon pulled by a man who looks eerily like a Burmese Newman. They both notice Sue Ellen walking by in just a bra, and she gives them a wink– ‘Whoa, mama…' [crash].”

Honorable Mentions: Latvian Orthodox Quiz, Navigating Bizarro World, A Race in The East River, The Feats of Strength, and a Grand Theft Auto-Style Race home to beat the phone call for Vandelay Industries. What do you think? Did these Redditors nail these ideas for levels in a Seinfeld video game? “Levels Jerry, LEVELS.”

12 Apocalyptic Movies That May Predict the Future