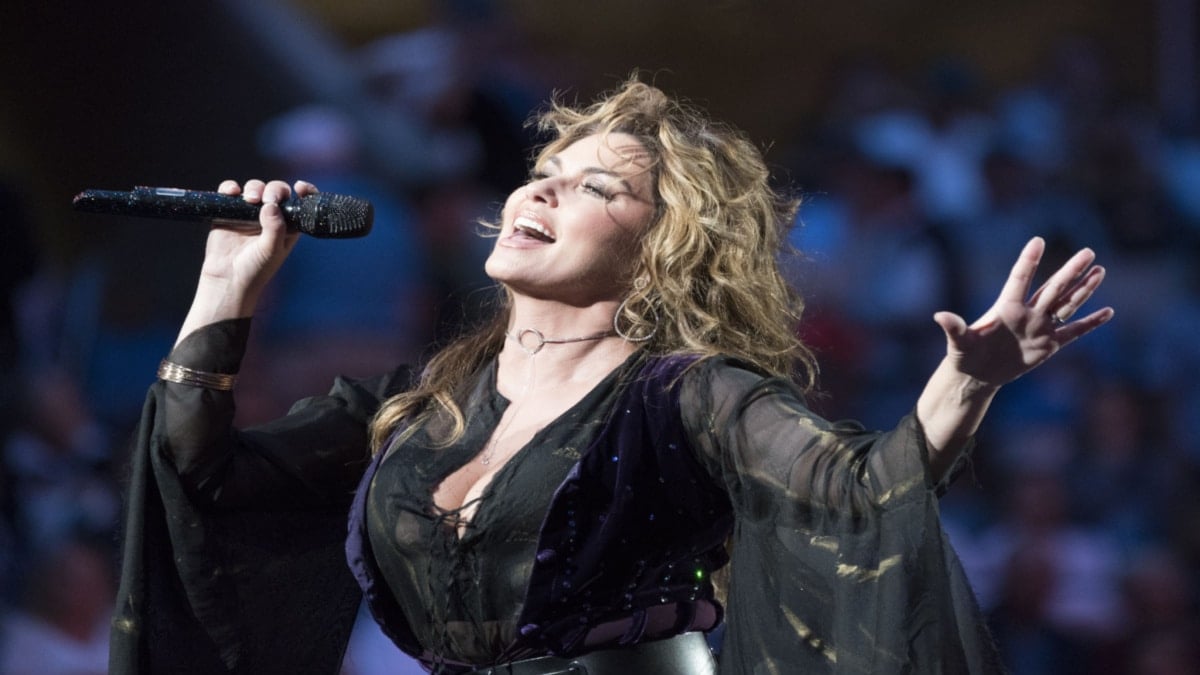 Shania Twain is a record-setting, genre-crossing, women-empowering pop-country feminist who overcame tragedy, fear, and heartbreak. While they are all awesome, the greatest Shania Twain songs are her tunes that embody her empowerment.

She has five studio albums full of her greatest hits. She is also in a Las Vegas residency through September 2022.

She exudes confidence and strength and is the Queen of feminist music. Both her radio hits and music videos represent strong and independent women. So here are the best Shania Twain songs for making us say, “Man! I Feel Like a Woman!”

First and foremost, “Man! I Feel Like a Woman!” is the ultimate girl-power anthem. The opening lyric is “Let's Go Girls,” followed by a guitar demanding your ears perk up. The music video is a role-reversed tribute to Robert Palmer's “Addicted to Love.”

We see a smokin' hot and sexy Shania wearing “A man's shirt and short skirt” and thigh-high boots. Five male models surround her. They pretend to play instruments and move exactly like the women models in Palmer's classic video.

The entire second verse is the epitome of a classic girl's night. “The girls need a break. Tonight we're gonna take—the chance to get out on the town. We don't need romance. We only wanna dance. We're gonna let our hair hang down.”

Women get hyped when this song plays. Also, this song has a significant LGBTQIA+ appreciation and following.

“She's Not Just a Pretty Face” speaks to the reality that women are intelligent, capable people who are more than a pretty face at their jobs. The lyrics highlight several professions, from driving a subway train to being a politician from being an astronaut to fighting for our country.

The song illustrates the reality that women can achieve and maintain any job a man can do. It strikes back at men reducing us to our beautiful faces, regardless of our qualifications.

One line sums it up beautifully, with a job no man can do: “She's mother of the human race.” If that doesn't make you say, “Man! I Feel Like a Woman,” I don't know what will.

Shania Twain's song, “What a Way To Wanna Be!” discusses all the time, money, and energy women put into trying to achieve an unattainable image. In addition, it touches on dieting and stabilizing moods and is relatable for many women.

Furthermore, it reflects on how some women live as if they compete with others instead of being part of a sisterhood complete with girl code and friends. “Don't be so obsessed, c'mon give it a rest; this is not some contest just do your best, ‘Cause, no oh body's perfect.”

4. “That Don't Impress Me Much” on Come on Over

In “That Don't Impress Me Much!” Shania's full of confidence and sass. The video is hot. She's in her signature midriff cut leopard print outfit with a leopard hooded cape, matching boots, and luggage.

It's an independent women's anthem and video. This lyric sums up the entire vibe, “Okay, so you're Brad Pitt? That don't impress me much.”

“Honey, I'm Home” is a lyrical reversal of traditional gender roles. Shania sings about not being paid enough and the exhaustion of working a labor-intensive job. “This job's a pain. It's so mundane. It sure don't stimulate my brain.”

She has had a terrible day where everything goes wrong. For example, her car doesn't start. So she's late for work and forgets her purse.

Nonetheless, when the whistle sounds, she heads home and announces, “Honey, I'm Home,” in a not-so Ricky Ricardo way. Instead, she elaborates, “Pour me a cold one, and oh, by the way, rub my feet; Give me something to eat, fix me up my favorite treat.”

She's poking fun at the old-fashioned ideas in these lyrics and claiming her spot on the throne. It's a fantastic country song.

Shania Twain made country music cool. “Any Man of Mine” is a breakout hit that garnered attention from non-country listeners as well. Despite the fiddles and country twang, the song is all rock and roll.

Additionally, if you listen closely, there is a hint of Queen's “We Will Rock You” in the baseline. “Any Man of Mine” is a feel-good song about a woman who knows what she wants, establishes, and enforces her boundaries with men.

I can't help but laugh and translate this as, “What do you want to eat?” The infamous question in relationships. “Any Man of Mine” was Shania's first single to hit number one on Billboard Hot Country charts. It's the second single off her second album, The Woman in Me, and it still rocks today.

The Netflix Shania Twain documentary explains she was worried about releasing “You're Still the One.” However, she wasn't sure if it was too slow because all her hit songs were upbeat.

“You're Still The One” is, still, her number one song, and the song became officially responsible for crossing Shania Twain over genres from country to pop. Because this was her ambition, it made the track powerful.

Shania and her ex-husband Robert John “Mutt” Lange co-wrote the song about their relationship. It was inspired by the media's lack of belief in the it love story, partly due to their 17-year age difference, among other variables. Lange also sang background vocals.

Sadly, after 14 years of marriage, Lange cheated on her with her best friend, and they divorced. Eventually, Shania remarried her ex-best friend's ex-husband, an unusual twist in the story.

“(If You're Not In It For Love) I'm Outta Here!” outlines the same lame, repeat advances with empty promises that some men use to pick up women. “Mind if I sit down? Can I buy you a round? Haven't seen your face before. Are you new in town?”

9. “Love Gets Me Every Time” on Come on Over

“Love Gets Me Every Time” is a relatable tune for women minding their own business, and then suddenly, BAM! Somebody comes along and switches it up on you.

Who doesn't relate to getting hit by the love bug? As she says, “I was quite content just a-payin' my own rent. It was my place. I needed my space. I was free to shop around in no rush to settle down.”

One of the greatest Shania Twain songs is “If You Wanna Touch Her Ask!” First, Shania breaks down how to treat and court a woman. She expresses how you'll be able to touch her, by starting from the heart and getting to know her.

The lyrics aren't wrong, “If you want to get to know her. Really get inside her mind if you want to move in closer. Take it slow; yeah, take your time.”

So if a guy isn't respecting boundaries and getting to know you before trying to have relations ask yourself this question, does he want to get to know you? If he doesn't, and that's what you want, it's time to bounce.

Shania has written and co-written some of the best country music and greatest love songs. Here are a few of my favorites, and they are on this Shania Twain songs playlist for your listening pleasure.