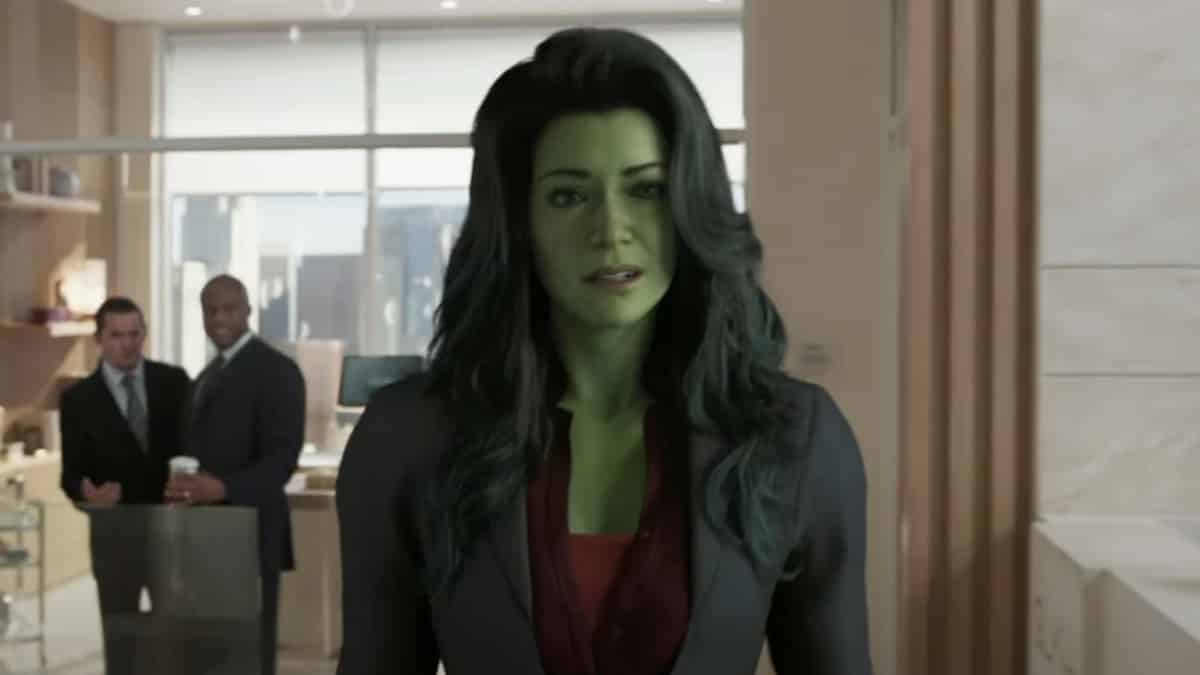 She-Hulk, the character, challenges gender stereotypes in comics in some fundamental ways. That’s what many of her fans love about her. It’s also why the CGI in the new trailer for the She-Hulk Disney+ show looks so terrible, and why that technical failure bodes ill for the show’s storytelling.

The special effects that turn Tatiana Maslany from petite 5’4 lawyer Jennifer Walters into the 6 ft. 7 giant green She-Hulk have been universally mocked, and I will join in with that universe. Unlike Mark Ruffalo’s big green Hulk, the motion capture She-Hulk isn’t particularly muscular; she’s just an improbably stretched-out version of a standard slim Hollywood leading lady. She looks like rubbery uncanny valley Gumby Barbie. When she hits something you half expect her to bounce back.

The answer is, unfortunately, gender.

She-Hulk gets her powers directly from the Hulk (her cousin) via blood transfusion. His Hulking out Hulks right into her—which means that her powers are a kind of green masculinity by proxy. She gets big and huge and muscular like a big bad male Hulk.

This is part of the appeal of the character. She-Hulk isn’t the usual svelt feminine Hollywood-figured hero, like Wonder Woman or Captain Marvel, who saves the day with every hair in place while presenting her best side to the camera. You can see her muscles on her muscles as she rears back and blasts her bulk through whatever needs blasting. For anyone who doesn’t fit into the narrow gender comic-book ideals, or anyone who doesn’t find just that narrow range of ideals attractive,  watching She-Hulk bust out of those bonds is cathartic.

Sometimes various She-Hulk comic creators have embraced the Hulkish masculine feminine contradiction. But many are wary of it. Sometimes She-Hulk is drawn with huge muscles. But generally, she looks a lot more feminine than her cousin. She’s big and fit, but she doesn’t look much like a real-life female bodybuilder. John Byrne, one of her most iconic artists, often drew her as a green swimsuit model, with no bulk to speak of. He also often had her break the fourth wall as if he recognized that her gender expression couldn’t fit in the outlines he’d drawn for her, and so he was offering her a way out.

The conceit of She-Hulk talking to the reader directly was generally amusing. But the effort to compromise between hyper-masculinity and hyper-femininity could also send the comic down some unfortunate rabbit (or Hulk) holes.

Any kind of deviance from the norm, for example, is stereotypically linked to hypersexuality. So writer Dan Slott, for example, thought it made sense to have She-Hulk sleep with…well, everyone.

Which wouldn’t necessarily be a problem—consenting adults can sleep with whoever they want. Except that Slott clearly saw it as one. He linked her bedroom habits to her deviance; Jennifer Walters was shy and barely had relationships with anyone; it’s only when she gets big and green that her concupiscence becomes gamma-charged. There’s one excruciating scene in Slott’s run where a judge in court reads a list of all She-Hulk’s sexual encounters which scrolls on for pages. This is supposed to be funny, but it’s hard to imagine a comic book narrative in which a male hero (like, say, the Hulk) is subjected to such gratuitous shaming.

She-Hulk, then, has always had the potential to challenge or rework gender expectations. But creators haven’t always (or even generally) known quite how to use or honor that.

And that’s the problem with the effects. An adventurous show which really wanted to explore the most interesting aspects of the character would have needed to approach her physicality in an entirely different way. Rather than relying on Maslany as the base and creating a CGI avatar, they would need to do something more like the old 70s television show, in which the enormous bodybuilder Lou Ferrigno played the Hulk to Bill Bixby’s tiny banner. Use someone like Charlotte Flair to model what an actual woman with height and bulk looks like. Commit to a She-Hulk who looks like she can hurt you.

Visuals are of course limited by budget, and failures there can just mean that the studio lacked funds rather than vision. The last bit of the trailer, in which She-Hulk picks up a guy she’s dating and carries him across her room like a traditional groom carrying a traditional bride, gets at some of the character’s potential for scrambling gendered expectations.

Still, I’d feel more confident if She-Hulk looked more like Hulk and less like Tatiana Maslany walking around a 2/3 size set.  It’s the bad guys who are supposed to be afraid of She-Hulk’s muscles, not the people writing her story.