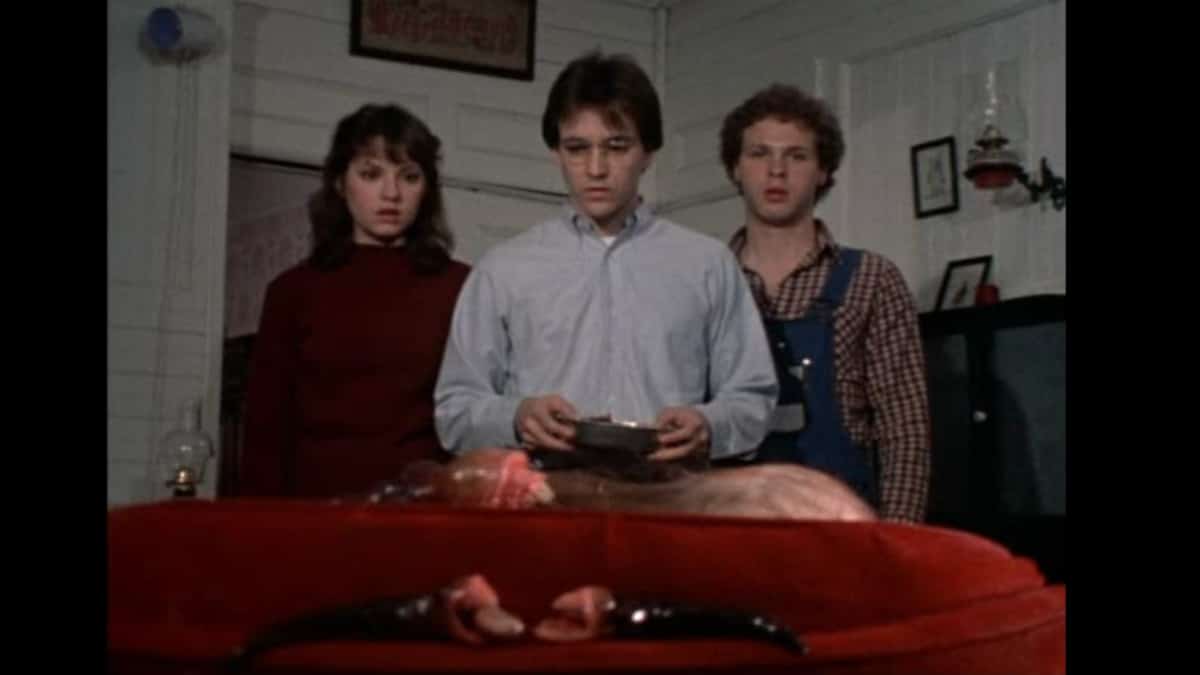 Bring on the spooks! Okay, some might say there are too many streaming services already.

If I talk about how “in my day” there was only Netflix, I’ll sound like a geriatric millennial. Cool, cool, cool. But there’s no denying that streaming services have exploded across our viewing devices. Of course, some are better than others (RIP CNN+).

And while Netflix’s continued survival is, at best, tenuous, Shudder is one streaming service that delivers in three key areas: original content, classics (dubbed “slashics”), and awful B movies that more people need to be watching instead of Real Housewives.

While Shudder boasts more titles than we can cover, here are fifteen essential scary movies to stream right now.

Tobe Hooper loves a moody, sweaty slasher set in the dark underbelly of Texas, and his follow-up to The Texas Chainsaw Massacre does not disappoint. Eaten Alive chronicles the maniacal antics of a hotel proprietor who feeds his guests to his pet crocodile. While this film’s proximity to Jaws may make it appear on the surface as a simple creature feature exploitation flick, Hooper’s unique directing style keeps us firmly rooted in his madness.

This movie feels like midnight, no matter when you watch it. And with a supporting role played by Texas Chainsaw Massacre’s Final Girl Marilyn Burns, Eaten Alive functions as a totally bizarre, spiritual sequel to the chainsaw-wielding trailblazer.

A meteorite crash lands on Earth, unleashing a species of alien slugs with a thirst for human flesh. These creatures then pursue an unsuspecting family who must battle their intergalactic infestation. 1983’s The Deadly Spawn is the definitive B movie. It has a fun premise, decent-enough effects, and such terrible acting that it’s almost delivering camp.

What makes this film succeed is that it simultaneously exploits the success of 1979’s Alien while also making fun of the science-fiction-horror sub-genre. A must-watch for anyone who loves B movies as well as those viewers who like the horror genre but don’t want to be too scared.

1996’s Scream rewrites the book on what a scary movie should look and feel like and provides a list of slashers we must check out if we ever aspire to really understand the genre. Horror geek Randy (played by Jamie Kennedy) lists several classics, including this 1980 Canadian horror flick. Terror Train uses a revenge formula to set up its murder spree.

With Jamie Lee Curtis once again playing a Final Girl, it can be said that this film is just Halloween on a train. While that may suggest you are about to view an inferior movie, it has a seriously terrifying climactic chase sequence that makes this slasher stand out among the post-Halloween copycats.

The vampire genre has long been home to queer narratives. Before The Hunger came Daughters of Darkness, a delightfully sensual story of a lesbian vampire who pursues a young couple staying at a seaside village. This movie is as much about atmosphere and desire as it is about the plot.

While elements of vampire stories often feel redundant, Daughters of Darkness manages to carve out some individuality, and the ending might even surprise you. The Lebanese-French actress Delphine Seyrig dazzles as the “Lady Dracula” in a performance that pushes the envelope further than 1936’s Dracula’s Daughter.

In the great tradition of The Omen and Rosemary’s Baby, Shudder original Anything For Jackson shows us just how scary parenting can be. Two demented grandparents kidnap a pregnant woman to perform a reverse exorcism in an attempt to resurrect the spirit of their dead grandson. What could go wrong?

While supernatural films can often stumble into repetitive fright patterns, Anything For Jackson constantly challenges itself to develop new ways to scare its audience. And we’re happy to report that they succeeded.

Horror often uses irony, satire, and meta-commentary to deliver elements of humor, but horror-comedy is a tricky subgenre to execute well. In Frankenhooker, our hapless hero Jeffrey tries to reanimate his dead fiancé (who died in a lawn mower accident) using the bodies of dead hookers.

While the premise is a wild and off-color reimagining of Frankenstein, it manages to sift through all the body parts to unleash some genuine pathos. Like The Deadly Spawn, it’s a great low-fright horror flick for the spook-curious in your life.

Jill Gevargizian’s The Stylist is a darkly comedic and disturbed deep dive into obsession, desire, and coveting that which we cannot have. Claire is a socially-awkward hair stylist who likes to murder her clients by scalping them, then takes home her souvenirs to her basement (which resembles Mombi’s closet of heads in Return to Oz) to wear the scalps and impersonate the victims.

Her journey of mayhem is not dissimilar to the great Sweeney Todd’s, and while there is some humor in this film, The Stylist remains consistently a shocking descent into madness with a truly killer ending.

Riding off the blockbuster success of Jaws, Alligator was a departure from other creature feature flicks attempting to ride Spielberg’s coattails (for example, Piranha, which is also streaming on Shudder). What makes Alligator different is that it sought to satirize the premise of Jaws, specifically the corruption and complicity among the city officials.

Coupled with some genuine scares, a decent monster, and a legitimately unhinged sequence at a backyard wedding, Alligator is the perfect film for anyone who loves creature features but hates what CGI did to the sub-genre.

7. The House of the Devil

Before Stranger Things taught us the selling power of 80s nostalgia, there was 2009’s The House of the Devil. Featuring a stacked cast including Dee Wallace, Greta Gerwig, and Manhunter’s Big Bad Tom Noonan, this supernatural fright fest drops us squarely in the fashionable 1980s. Jocelin Donahue plays Samantha, a babysitter hired to sit for an old lady at a spooky estate in the middle of nowhere.

The film pays tribute to 70s classics like The Amityville Horror, Burnt Offerings, The Omen, The Texas Chainsaw Massacre, Rosemary’s Baby, and When A Stranger Calls while still keeping its characters firmly rooted in the slasher vibes of the 80s. It is a wonderful and weird film with some serious scares. Watch with the lights on, or have a trusted friend on speed dial.

While the pandemic largely shut down film production, Shudder exclusive Host had other ideas. The film – coming in at the perfect length of 56 minutes – takes place entirely on a Zoom call in which some friends, bored during the pandemic, have a seance that results in some deadly consequences. A Zoom horror movie sounds like the start of a bad joke about a work meeting.

Still, Host delivers a uniquely entertaining film that captured the collective tension and fatigue that video conferencing had on people during the quarantine. I’m not sure what success the film will have in a world that has mainly moved away from Zoom happy hours, but it will be one of the only films to preserve quarantine living; a scary takeaway certainly, and that’s before you even get to the haunted spirits.

Chopping Mall does everything you want the 80s to do: it gives you a mall, rowdy teenagers, it gives you naked, murderous chases, and killer robots. This movie is so ridiculous, and yet that’s part of what makes it so special. Chopping Mall (a.k.a. Killbots) follows the exploits of a group of mall employees who decide to stay in after closing time and have a party in the furniture store.

Unfortunately, the mall has recently brought in robot security guards to keep the peace, and a pesky bolt of lightning causes the otherwise harmless robots to unleash a murder spree to carry out their important mission of protecting the mall. It is the perfect nostalgia film to watch whenever you miss a lifetime spent hanging out at malls.

Certain films have captured the hearts of cinemagoers despite really unseemly subjects. For example, Mommie Dearest became a cult classic despite its horrifying accusations of abuse. And the 1987 film adaptation of Flowers in the Attic only went to show that America was deeply fascinated by this abuse. Butcher Baker Nightmare Maker carries with it the dark and twisted pleasure viewers experienced with Mommie Dearest and Flowers.

Part hagsploitation, part early proponent of gay rights, Butcher Baker tells the story of crazy Aunt Cheryl (played by the devious Susan Tyrrell), who seeks to control and dominate her nephew, even going so far as to commit murders to keep him with her forever. It’s creepy, it’s gross, it’s midnight camp, and it’s worth a watch.

Is there a better line in horror cinema than: “Your suffering will be legendary, even in Hell!” Pinhead and his army of Cenobites make for fascinating villains because they typically only make brief appearances in the film, sent to wrangle up the real villains who usually bring about their own demise through avarice or desire.

In the original film – based on Clive Barker’s novella The Hellbound Heart – pleasure-seeker Frank buys a puzzle box that gives him unlimited access to pleasure… or, as it turns out, opens the Gates of Hell. Whoops. Frank manages to escape Hell and, with the help of his mistress, goes on a murder spree to feed off the victims and bring himself back to life.

It is a wonderful, atmospheric film that puts sexual pleasure and desire at the forefront of the conversation. While its string of sequels has never found their stride, Doug Bradley’s Pinhead has etched out a home in the Mount Rushmore of horror baddies.

Lucio Fulci is one of the masters of Italian horror cinema, and Zombie might be his greatest work. Released in 1979 under the title Zombi 2, Fulci’s story of the undead was marketed as a sequel to George A. Romero’s mega-hit Dawn of the Dead despite having nothing to do with Romero’s film (which, like Chopping Mall, is one of the few, great horror movies set in a mall).

Fulci’s film tells the story of a tropical island ravaged by a disease that turns its inhabitants into flesh-eating monsters. Despite some clumsy dubbing, Zombie manages to get you to really care about the characters, and their journey to stop the spread of this disease packs a different punch thanks to our pandemic perspective. Zombie also has one of the greatest scores in the history of horror films (thank you Fabio Frizzi).

A good streaming platform will give you access to classic movies or TV shows you love. Some of Netflix’s pitfalls have been losing crowd favorites like Friends or The Office to rival platforms. Shudder does well by ensuring you have access to some of the all-time greats, and Halloween represents the pinnacle of horror.

A simple story of an escaped mental patent pursuing babysitters on Halloween night, fantastic dialogue that gets you to care about the characters, and a paralyzing score penned by director John Carpenter have solidified this film as one of the best in the business (further evidenced by its many sequels, alternate timelines, and new reboot trilogy). Halloween succeeds because it keeps it simple, worthy advice for all aspiring creatives out there.

A Definitive Ranking of Cinderella Movies