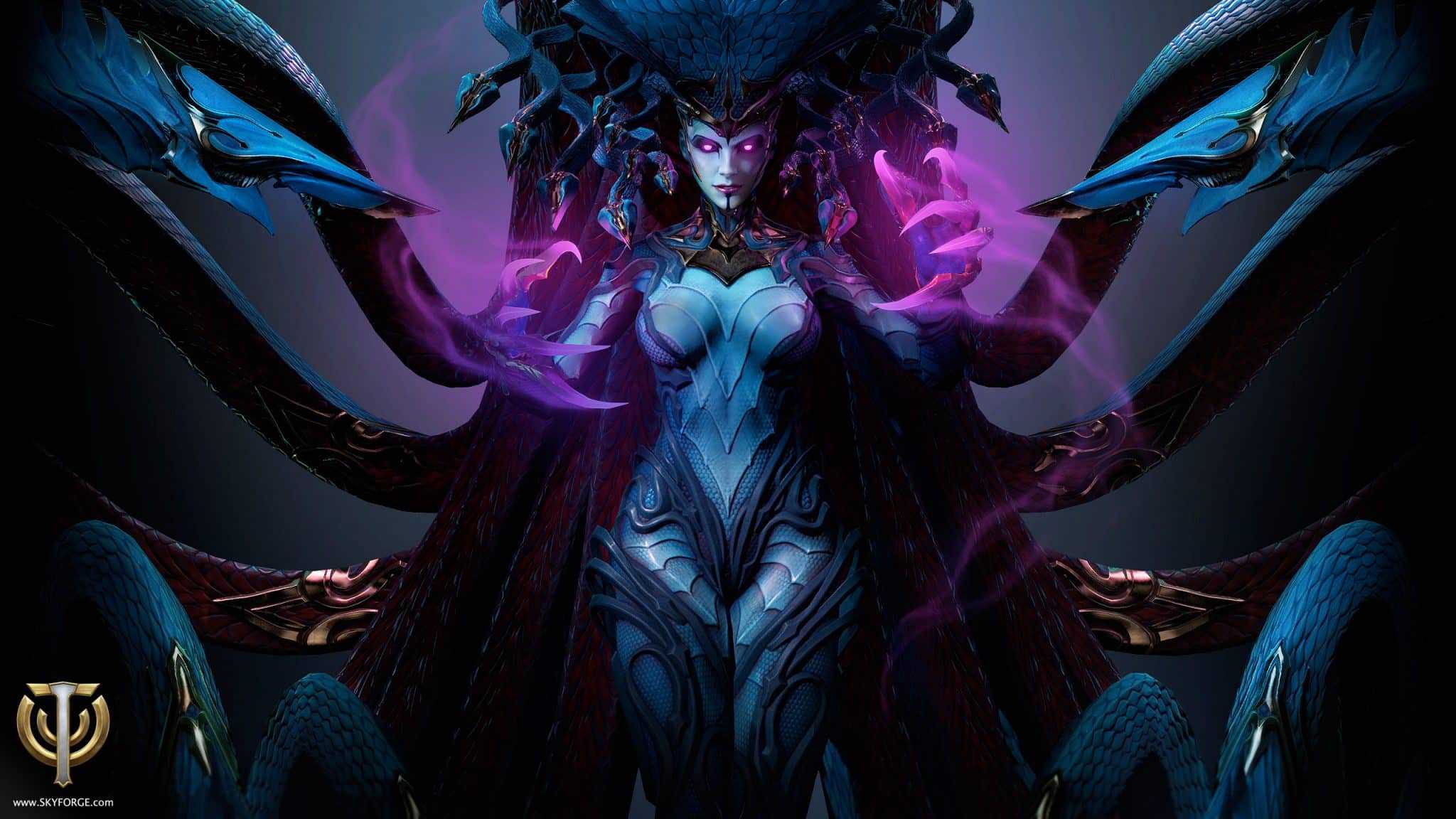 It is March 8. The year is 2020. I just downloaded Skyforge free-to-play through my Steam account.

Skyforge is a free MMORPG by the developers: Allods Team and Obsidian Entertainment. It is rated “T.”

Skyforge has an excellent customization feature with many options to make your character as unique as you would like. My Cryomancer is a homage to the “Macho Man” Randy Savage. There are as many as 18-character classes you can choose from as you unlock them throughout the game.

It may sound odd running alongside characters with butterfly wings and halos, or high-tech body armor looking like an 80’s professional wrestler. It works just fine though since Skyforge blends Sci-Fi, Fantasy, and popular culture seamlessly together in this visual stunner of an MMO.

In the game, I’m immortal. Through an intensive, and what seems to be an infinite tutorial process, the game’s NPCs, nonplayer characters, provide me with all the professional tools and skills necessary to become a mighty god on the world of Aelion.

The game also throws in the obligatory boss fight too. I was happily reminded of my childhood “Nintendo days” when 8-bit boss fights were all the rage.

As my quest led me through the many provinces and temples of Aelion, I started to notice that I desired more freedom on Aelion. I wanted more of an open-world concept instead of just doing what the NPCs told me to.

The quests and opportunities are endless, as are the rewards and gear as well, but I’m a slave to the NPC’s narrative, and that is impossible to ignore even though I was getting loot and enjoying the fluid beauty and action in the game.

Sitting in my office chair, I’m getting overwhelmed with the endless menus. I’m also getting confused by trying to remember battle maneuvers AND what gear I could equip in the not-so-friendly GUI, graphical user interface. I remind myself that with fiber optic speed, I’m a god and have to acquire followers on Aelion. I press on.

The fundamental issue with Skyforge is that it has too much going on. This game is trying to be everything all at once.  Combine that with the repetitive nature of an MMO that has NPCs continually telling you to go somewhere else and do something, and it feels stale rather quickly.

I have learned to accept this cookie-cutter concept in an MMO; besides that, I have followers to gain and protect. I have powers to discover, but the menu screens keep popping up. I see there are dozens of things I need to unlock as I travel through Aelion. My in-game personal assistant robot is of no help.

I suppose he is there for comic relief. I mean, he never shuts up. I’m trying to save an entire planet of people, and I have this bot always making obvious comments about my situation. This madness continues, but no one else in the game seems to notice.

I can change classes at any time within the game. Different classes have a very different feel and purpose. It should make playing the game easier. If I’m on a map where I need to do more damage, I’ll switch to a Paladin. If I need more healing, I’ll switch to a Lightbinder.

However, the vulgar mechanics of this game make this feature more complicated than need be. There are menus, then submenus, and then even more submenus after that.

If the point of the game is to be able to change classes and gear instantly, it is certainly counterproductive to have me navigate through an unorganized digital mess of menus.  I’m reminded of the saying- “A camel is a horse designed by a committee.” This digital nightmare of menus is a “camel,” to say the least.

The combat is terrific. Smooth and entertaining graphics that allow me to enjoy destroying my foes. I soon realize that Skyforge will be an immeasurably better experience if I stop taking the incoherent layout of the menus so seriously, and just have fun killing monsters. What kind of shepherd would I be if I allowed my flock of followers to suffer because I was too enthralled with the complicated menu screens?

I see right away that invasions are the primary source of action in this game. There are waves of demonic-aliens constantly plaguing Aelion, and it is my job as a god to wipe them out and protect my followers.

As I forge ahead, I see I can do this by playing solo missions or inevitably group together with other players for the harder content. There is also a PvP mode that allows me to gain power by fighting other players in the game.

Although there are many players online with me, I feel no sense of community in this game. It’s like visiting New York City for the first time and trying to find a compassionate person on the street. Everyone has something to do and somewhere to go ten minutes ago; maybe they are just as confused about the menus as I am. I decide to go it alone.

I have 51 followers now. They have built a sanctuary in my name. Word of my deeds has started to spread throughout Aelion.

It must have been because of the unquestionable slaughter I inflicted on the humanoid-rat-demons that were invading the Okki Island province. I’ll admit, they had a terribly good fashion sense, and dressed well; I almost felt guilty cutting them to ribbons. ALMOST.

I earned a mount for myself—a mighty battle-ready rhinoceros with a huge hammerhead bone on its face. I named him George. Not in the game, just for personal reference. He looks like a George.

As I sit upon his back, he charges valiantly toward any ugly nightmare the developers throw at me. I remember one tragically ugly invader. A giant spider/cyborg hybrid with a skull for a face. A truly lonely bastard that was obviously a silly product of the online gaming generation. George didn’t even flinch.

I’m starting to like it here. The vibrant colors and wicked insanity are beginning to feel like home. The constant barrage of voices that keep talking to me throughout the game is no longer annoying me. In fact, I’ve grown to like them. I even call my personal assistant bot, a “friend.”

Skyforge is like when you eat a heavy meal, fall asleep, and have vividly weird dreams. It’s more and more fascinating than scary or annoying, and it’s pulling me in deeper with every quest I embark upon.

Inevitably, with every free-to-play MMO, the pay-to-play prompts pop up and try to tempt me. They are akin to that certain religious group that knocks on your door on a Sunday afternoon to save you from a life of sin and eternal hellfire.

I know they mean well, but I have T.V. to watch, and naps to take. Please stop interrupting my important itinerary of things to do. I’m not ready to pay-to-play yet, I’m still making memories as I ascend the ladder of Aelion gods.

Strange surroundings in this overwhelming world called Aelion. But it doesn’t bother me anymore. I have grown to like it and look forward to what insanity lies around the corner. I even appreciate the NPC’s stale yet compassionate instructions.

When the fighting starts, I forget all else. I’m just a god, who fights monsters, to protect a planet from demonic-alien invasions.

I now feel I want more to be thrown at me. I don’t care if I understand it right away. Chaos is order. The more I grow as a god, the more I will understand and appreciate things later.

The more I play Skyforge, the more I like it. In the beginning, it feels overwhelming and complicated. I realize now that it is because I’m used to more cynical MMOs that contain more adult content. These types of MMOs leave a lot left unsaid and for the player to figure it out.

Skyforge is an excellent MMO for a person that may not have played many, or any, MMOs in their past. The NPCs take you by the hand and lead you down the insane path instead of abandoning you to figure it out all on your own. This is surprisingly helpful the longer you stay in Aelion.

Voices, action, sounds, battles, menus, monsters, credits, gear, and eventually, I suspect even the kitchen sink will be thrown at the player, unapologetically, in Skyforge.

The chaos is balanced nicely with the support of the NPCs. Some people are going to be turned off by the game, pushing you in the direction the story demands that you go. I understand that.