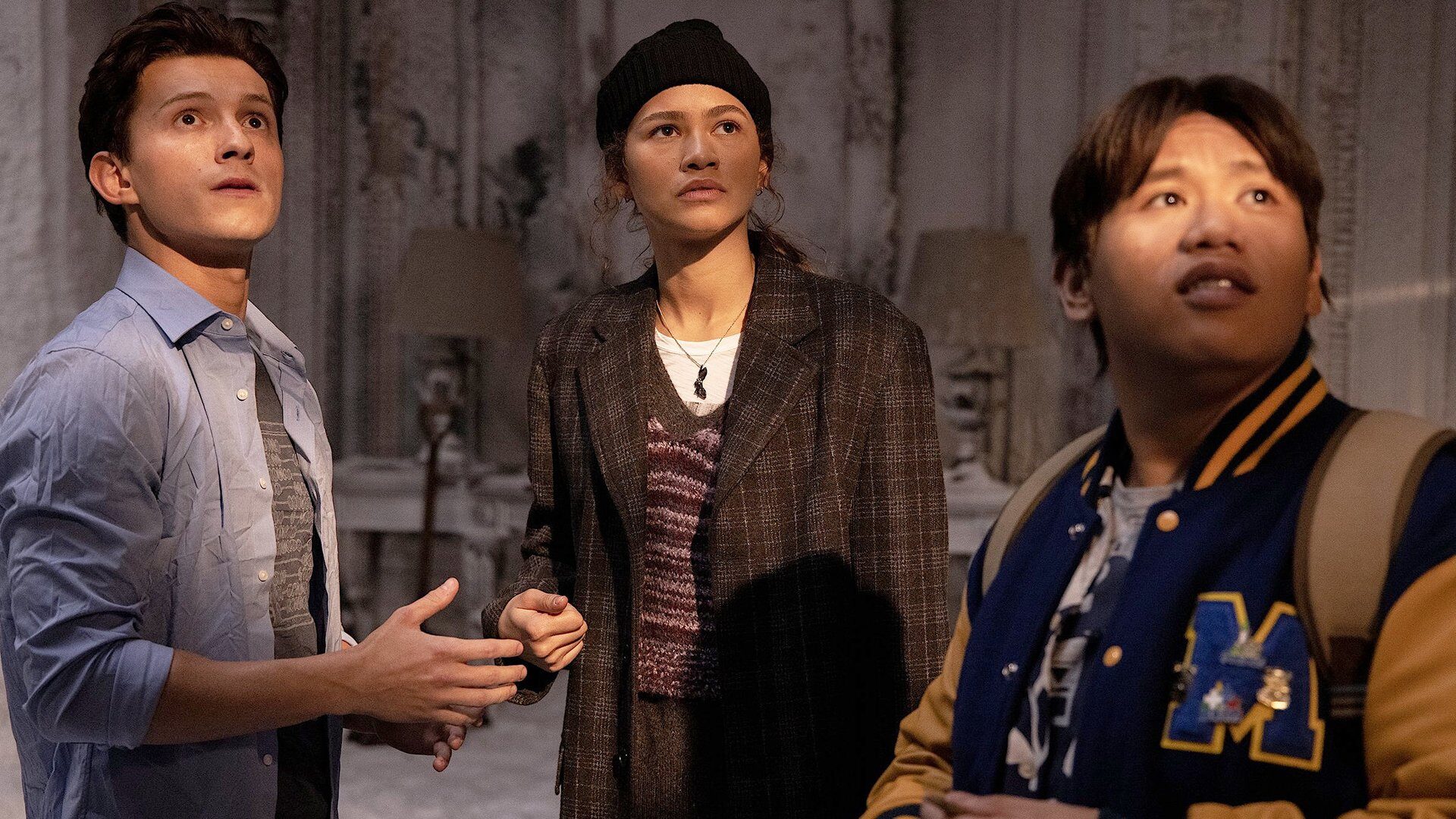 Spider-Man: No Way Home is a coming out story.

The film, now available for purchase on most streaming platforms, is all about the moral panic that results when people find out who Spider-Man/Peter Parker (Tom Holland) really is. It shows how difficult it is for young people who have to hide their identities from peers, family, loved ones, and authority figures. The movie asks you to sympathize with Peter’s dilemma. Then, in line with Disney’s and Hollywood’s longstanding, nervous homophobia, it asks you to forget it.

The movie begins with conspiracy theory tabloid merchant/Alex Jones analog J. Jonah Jameson (J.K. Simmons) revealing to the world that Spider-Man is Peter Parker. He falsely accuses Peter of murdering the supervillain-posing-as-a-superhero Mysterioso (Jake Gyllenhaal). The revelation sparks a massive moral panic; Peter’s school is staked out and his home is vandalized. The scandal also leads to his rejection from MIT. Worse, MIT also rejects his girlfriend M.J. (Zendaya) and his best friend Ned (Jacob Batalon) because of their association with him.

To try to fix things, Peter asks his superhero teammate, the wizard Dr. Strange (Benedict Cumberbatch) to help. Strange offers to erase the memory of Peter from everyone in the world. Peter, though, doesn’t want his close friends to forget him. Trying to change the spell midstream leads to a multiverse meltdown, in which everyone in every dimension who knows who Peter Parker is, is magically summoned to the MCU reality.

There’s an obvious analogy here with queer experience, discrimination, and trauma. Peter is involuntarily outed and his entire world falls apart. That’s what happens to many LGBT youth who are forced to come out to unsupportive parents or communities. In No Way Home, people literally port-in from other dimensions just to tell Peter how much they hate him. In the most emotionally painful scene of the film, he even loses his adopted mom, Aunt May (Marisa Tomei). And again, losing the support of one’s parents is what happens to many queer kids when they come out.

Peter’s panic when Strange offers to essentially shove him back into the closet also resonates. As brutal as the results of coming out can be, hiding yourself from your friends and loved ones is also soul-killing and miserable. Peter is especially horrified at the thought of having to come out to Aunt May all over again—and at the thought that his romantic relationship with MJ will be erased.

Dr. Strange, a straight guy asshole, is largely unsympathetic and clueless. He blames Peter for panicking at the thought that his support structure is going to be torn from him. Strange even admonishes him for trying to live two lives.

But of course, queer people aren’t the ones who have decided that queerness is to be treated as a big, monstrous secret. LGBT youth didn’t create a world in which they have to control information about their identity carefully; they are just trying to negotiate it. Jameson and Strange are two sides of the same straight-bearded patriarch, abrogating to themselves the right to open or close the closet and to tell queer people how to live their lives.

There’s one catch here: Peter isn’t queer. In fact, there are no queer people in the entire multiverse in No Way Home. Peter meets two alternate Spider-Men—played by Andrew Garfield and Tobey Maguire. He forms strong friendships with them. But all three Spider-Men are carefully defined as heterosexual, and their relationship to each other is platonic. The closest they get to intimacy is a somewhat embarrassing discussion about the fact that Macguire Spidey has bio-webbing. He assures the other two that it only comes out of his arms, not out of anywhere else. Thank goodness.

It's not a surprise that the film shies away from portraying queer people or queer relationships. Disney has been dancing around queer representation in Marvel films for some time. They’ve gotten somewhat better recently—The Eternals and Disney+’s Loki both include explicitly queer heroes.

But a lot of homophobia remains. The licensing agreement between Sony and Marvel for the Spider-Man rights actually specifies that Peter Parker has to be white and straight, according to leaked emails. And Disney has vacillated when asked to forthrightly condemn, and end donations to, politicians who support the Florida “Don’t Say Gay” bill. That’s a measure that effectively criminalizes the discussion of queer identity in schools.

Given Disney’s track record, the conclusion of No Way Home reads very uncomfortably. Despite Peter’s heroic efforts to fix the multiversal breaches, the world keeps coming undone. Finally, Peter suggests that Strange can save the universe by completely erasing Peter’s existence from everyone’s memory. Not only will no one know he’s Spider-Man; they literally won’t know that Peter ever existed.

To save the universe, Peter has to become more closeted than ever. The fate of the MCU rests not on our hero boldly declaring who he is, but on him erasing himself.

I’m sure the creators of No Way Home didn’t mean to tell queer kids that they can save the world by staying in the closet and refusing to tell anyone that they’re queer. But by borrowing aspects of the LGBT narrative without thinking them through, and by refusing to actually include LGBT characters, the movie ends up with an ugly message. The MCU almost seems to be patting itself on the back for its own cowardice and bigotry, as No Way Home insists that for young people with a secret, refusing to speak, or to exist, is the real heroism.

Easy Healthy Habits That Don’t Include a Pricey Gym Membership

14 Ways To Get Free Cars