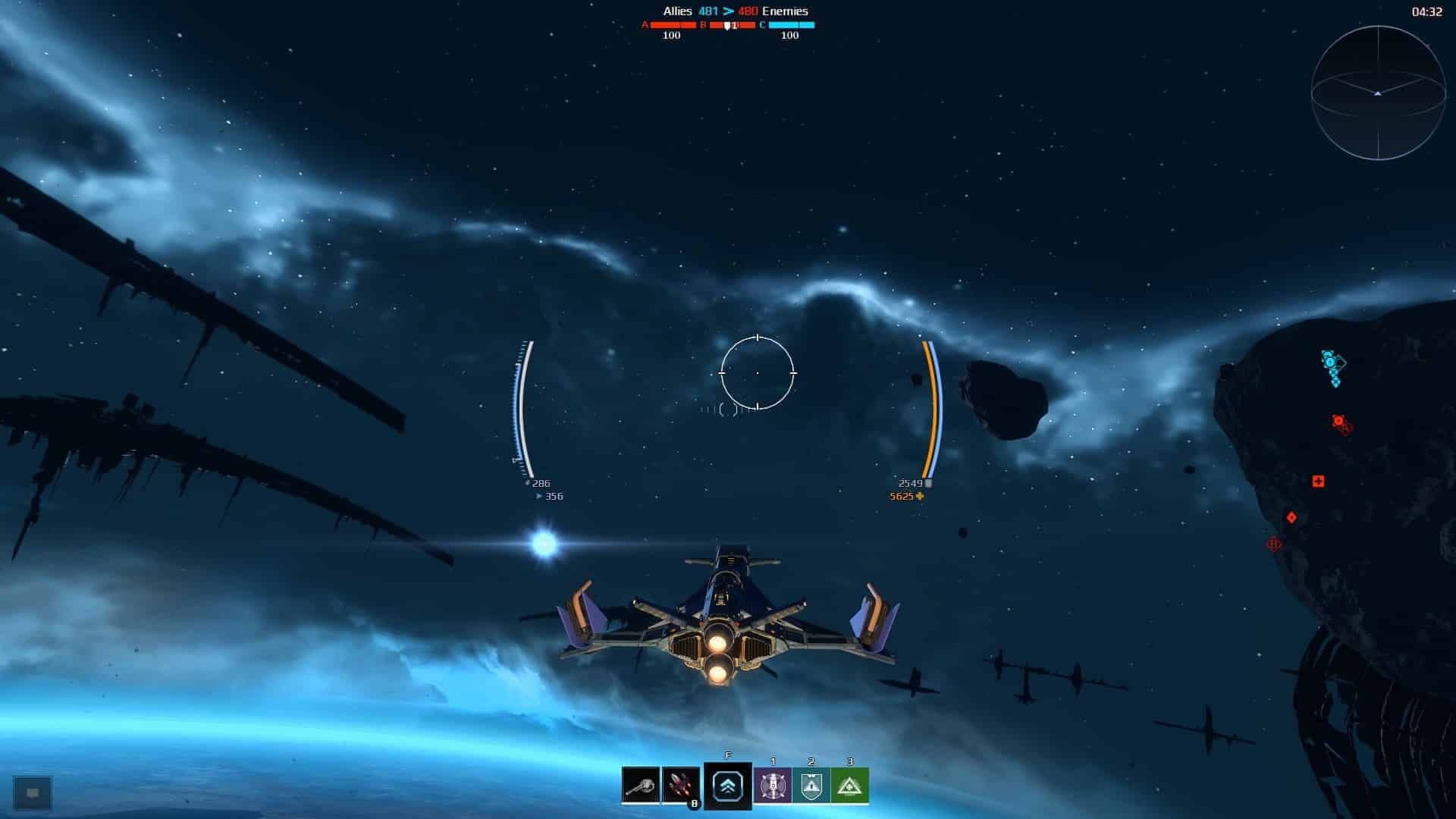 Welcome to the future in Star Conflict. This is a PC sci-fi themed, space battle “MMO,” with fast-paced action published by Gaijin Entertainment.

Like the game Crossout (read my review here), players pilot dozens of different spaceships (instead of cars), and engage in space battles, build entire fleets of ships, and collect parts and game credits to create bigger and better vessels.

The ships are all outfitted with many different choices of weaponry, shields, and hulls, depending on which of the 3 factions the player chooses. Choosing a faction determines the type of ships the player starts with.

In Space, No One Hears You Complain

OK, let’s get into this review now. I can’t get into this game. Although it has amazingly beautiful graphics and magically fluid performance, it doesn’t spark and persuade my soul to ignite. It is buggy at times, and I get stuck on the loading screen a lot. Each update from the developers seems to make the game more expensive and complicated too.

However, in any game where I pilot a vessel, I want a controller.

I want to feel the rumble when I’m shot or crash into things, I want to feel like I am in the game, and in harm's way. The keyboard and mouse make me numb to everything that is happening around me. There is no real movement in the game. My ship just floats faster or slower past things. It is a sterile experience, to say the least.

Star Conflict throws you into this massive unfamiliar universe, with alarms going off and digital readouts all over the place, with no sense of direction or purpose at all. Overwhelmed with feelings of confusion and anxiety, I’m then forced to engage in dogfights, capture beacons, engage huge ships, and maneuver through gigantic space stations.

May the Money Be With You

One interesting feature of the game is that you can explore endless amounts of space. Cue Star Trek reference here. As I roam the infinite darkness, I can run into other players and join up with them. This is boring for me. Drifting through space in the hopes I discover new worlds/players is a chore while I hold down the W key on my keyboard.

Of course, because this is a Gaijin game, it has the play to pay option. I have the choice to spend real money to buy in-game credits to upgrade my ships. I see that I gain experience and game credits quickly, but everything is so expensive that I would have to play for 6 months straight just to earn what a $4.99 pack gets me.

This Game Looks So Repetitively Good 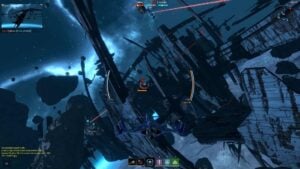 I mean visually, it is enticing, but I thought I’d have more fun playing a space shooter. There are so many modes and maps, there are even 200+ types of ships to choose from, but it all falls flat.

Star Conflict is extremely repetitive. I find myself doing the same things repeatedly with no satisfying rewards at all. The world is static and never changes. I can’t engage with my environment. I find myself flying and shooting through an amazingly beautiful universe, but that is it. That’s all this game ever is. The same thing, over, and over again.

In Crossout, I can build my car in real-time, I can decide what kind of weapons and armor to equip my car with so I can implement and improve strategies to kill my foes on the various maps. In Star Conflict, I just buy upgrades for pre-designed ships and fly around in space, with no feeling of responsibility for my failure or success.

Another issue I have is that because I am flying around in the infinite universe, I cannot really see the other players/bots in the game. They appear on my digital readout screen as little red diamonds. I just shoot at the little red diamonds until they blow up. I can accelerate and get close enough to see them, but it takes forever because the universe is so big.

Online controversy plagues this game as well. The game is always changing. There is no consistency and because of the unbalanced nature of matchmaking in the game, the consensus is to wait until the developers fix it. I don’t know about you, but I have fun playing a game, not waiting to play a game.

The game has an internal polling feature which allows players to communicate with the designers to improve things all around. However, the online community feels these recommendations fall on deaf ears. With every update, it seems the game is more geared for pay to play, something that players have continually complained about in the polls and online, but the developers continue to make the game more expensive to play.

I find myself desiring more of a single-player experience in this game as well. If I could explore and fight in a story mode, I would be much more comfortable when playing with or against other players. I don’t understand the countless menus. I want the ability to have a personal experience in Star Conflict, but the design of the game does not allow me to.

Your Lack of Simplicity Disturbs Me

There are so many options and upgrades it is confusing. A single-player story mode would allow me to get comfortable with many of these options without the pressure of failure at the same time.

This game is advertised as an MMO, but I feel it is more of an “instance” type game. I sit in a lobby and wait to be injected into the fray on every mission. I feel this is misleading to the player because there is no open world to roam around in. I sit in my hanger upgrading my ships, or I can go on a mission. There is nothing open world about that.

This game could have been an ode to flight simulators and space battles in general, and it could have set the new standard and redefined the genre, but it falls terribly short.

I’m still trying to understand the complicated storyline as well.

Each race has 2 factions, and the more successful missions you have, the more reputation you gain within these factions.

Here is where it gets even more confusing. I think each faction has 3 upgrade levels for gear. There is also a skill system for each faction, so as you build a reputation, I guess the idea is to build up the skill levels equally to have the most well-rounded ship.

The thing is the skills are all different and hard to keep track of. One faction may help you do more damage while another gives you better shields. This is something I cannot devote my attention to while I’m trying to understand the many menus in the first place.

Oh, and each faction has its own special ability. You must know and remember these as well. The Empire ships are faster, while the Federation ships can cloak, and Jericho has some special sort of missile system.

I want to play a game and have fun, not memorize the equivalent of a P.H.D. amount of information and then have to remember what to do on what menu and so on. I suppose the developers put all of these options in to make the game appealing for different gaming styles, but it just clogs up the works. 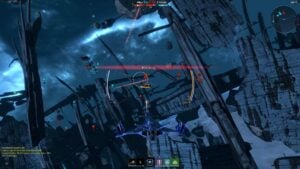 I Won’t Be Back

I have taken a lot of breaks while writing this review because I just can’t enjoy this game. And by breaks, I mean naps. I have done everything I know to try to like this game, but I don’t. The game makes me feel overwhelmed.

I find myself grinding away and floating through space way too much in Star Conflict. In order to get the materials I need to upgrade my ships to be competitive, I keep playing missions over and over again with absolutely no enthusiasm whatsoever.

I must force myself to focus on providing constructive criticism for this game. I admit I do not know everything about video games, and people certainly have the right to enjoy this one, but Star Conflict is not for me.

I don’t like Star Conflict. The concept is too complicated, and its execution is bloated. I had to force myself to play this game in order to write this review. This game gave me so much anxiety I couldn’t sleep last night. I was rooting for this game because of the way it looks. But looks can be deceiving, and the only good thing about Star Conflict is the way it looks.