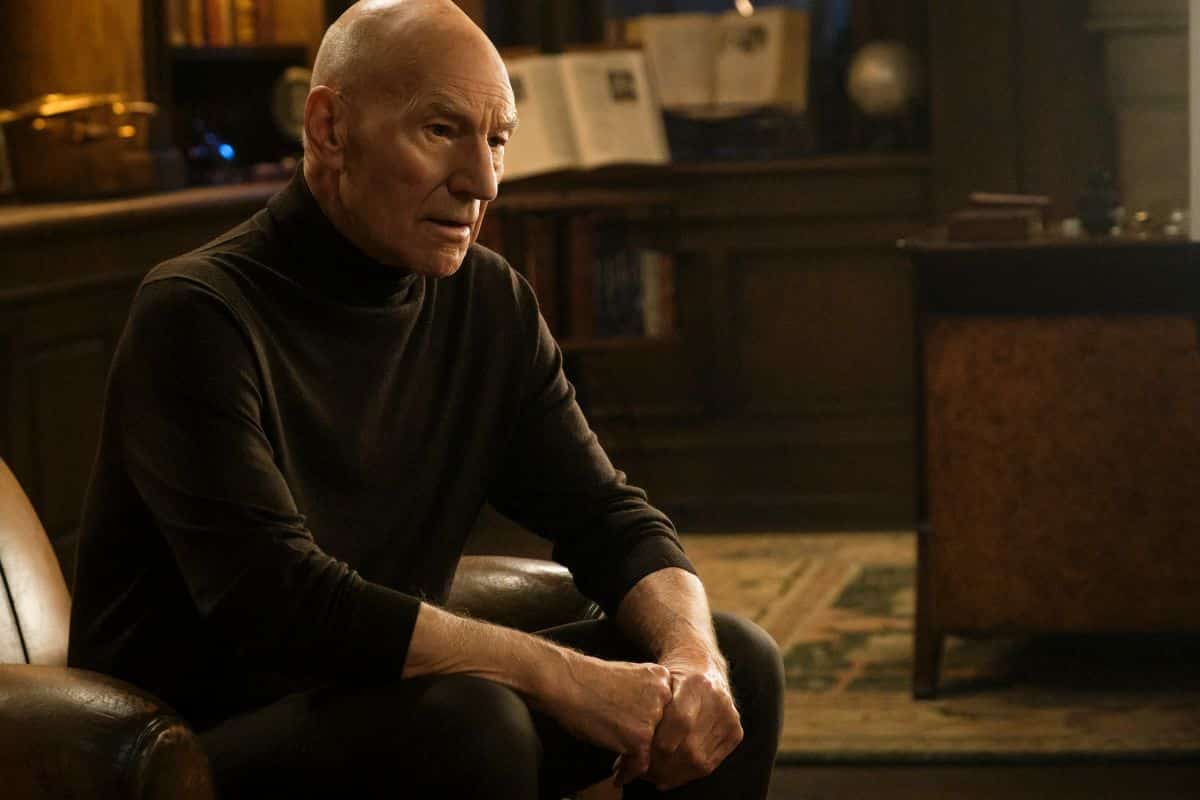 So the first episode of the second season of Star Trek: Picard has a lot in common with the same episode of the first season. We’re at the Picard family vineyard, harvesting grapes (via transporter), Jean-Luc has a conversation with his Laris, the beautiful Romulan refugee who runs his household, he’s headed to Starfleet Academy very shortly, and everything is almost excruciatingly slow.

Thankfully, the episode opens with a bang. The bridge crew of a Starfleet ship is dealing with chaos. An intruder has boarded the ship. People are bleeding and hurt, and the electronics are going wild. Everything is done in quick cuts and moments, to heighten the confusion and chaos. Then we see him. In the midst of the melee, Picard is rising from a knee. We get some cuts to other familiar faces from Season 1 – Rios, Dr. Jurati, Seven of Nine. Picard calls out to the computer to activate the self-destruct. As the ship’s computer counts down to destruction, and we hear an all-too-familiar voice speak his name.

Meanwhile, Back at the Chateau

After the opening credits, we jump back to 48 hours prior. Laris reminds Picard that he’s giving a big speech the following day, then we have a charged, will they won’t they moment between them, that ends poorly. Regret is the order of the day, and the point is driven home, hard. Almost too on the nose in his conversations with Laris, his speech at Starfleet Academy (more on that in a moment), and his memories of his childhood and his mother, shown in flashbacks. They’re building to something.

Meanwhile, out in space, the USS Avalon – now brought into canon from the video game – is encountering a spatial anomaly, opening before them. Seven of Nine is defending her ship – La Sirena, that she inherited from Rios from attackers, while transporting medical supplies. And Rios, now in command of the newly recommissioned USS Stargazer, beams Dr. Jurati on board to go investigate the anomaly. It’s never stated outright, but suggested that the Avalon didn’t survive their encounter.

But I’m getting ahead of myself. We’re not told specifically how much time has passed since the events of Season 1’s finale, but it’s been “over a year,” according to Soji, “since the Federation rescinded the ban on synthetics,” and she’s been touring the galaxy. Dr. Jurati is with her, but then responds to a hail needing her help. Everyone has moved on. Rios and Raffi are back in Starfleet officially, Raffi now commanding the USS Excelsior. Elnor is the first full Romulan cadet at Starfleet Academy, where Admiral Picard is also the Chancellor. He offers Elnor a first edition of Spock’s autobiography, The Many and the One, about Spock’s academy experience.

After seeing off the cadets on their new assignments (think on-ship internships) and catching up with Raffi, Picard goes to meet another, older friend. Whoopi Goldberg’s Guinan, from Next Generation and the Star Trek: Generation movie, is running a bar, at 10 Forward Street in Los Angeles. Picard asks her for advice on healing the heart rift he has with Laris.

But before he can put her sage wisdom into practice – and given the theme of the episode, we’re left thinking maybe it’s not really his priority, when he gets a call from Starfleet Command. When the Stargazer got to the anomaly, it received a message, asking for admittance to the Federation, directed solely at Picard. Picard rushes off to save the day, without so much as a goodbye.

He’s soon on board the USS Stargazer, once Picard’s original command. The latest version is designated NCC-82893 – no more appended letters – and is the first of a new class of Starfleet ship, using technology components studied and salvaged from the captured Borg cube from last season.

Needless to say, things very quickly start going horribly wrong and we catch up to the episode teaser. More details this time around, but I don’t want to spoil the surprise. But just as the computer countdown to self-destruct reaches one, the intruder quotes Jean-Luc’s mother, and in a flash, Picard wakes up, back at Chateau Picard – sort of.

And we finally get the reveal that’s been teased in every promo for Season 2 – “Goddamn Q!” There’s a fun moment where a de-aged John de Lancie comments on how old Picard has gotten, and “catches up,” then reminds mon capitaine that “the trial never ends… welcome to the very end of the road not taken.”

We’re then treated to a preview of the rest of the season, that appears much more adventurous and exciting, complete with time travel, the Borg queen, and more Q shenanigans, capped with his warning, that, unlike It’s a Wonderful Life, “this isn’t a blessing – it’s a penance!”

While everything does start incredibly slowly, and, in my opinion, takes way too long to get into the Star Trek of the matter, at least it’s only one episode. As interesting as it ended, season one was way too much of a slow burn for me in the beginning. And while we spend most of this first episode catching up to everyone, there is action and adventure, and the promise that the rest of the season will be exposition as we go and not the 3 hours of setup before we get to space.

So enjoy episode one for what it is, and hold onto your horses for the rest of the season. New episodes of Picard stream every Thursday on Paramount+.

The Best Pokémon Rom Hacks and Fan Made Games