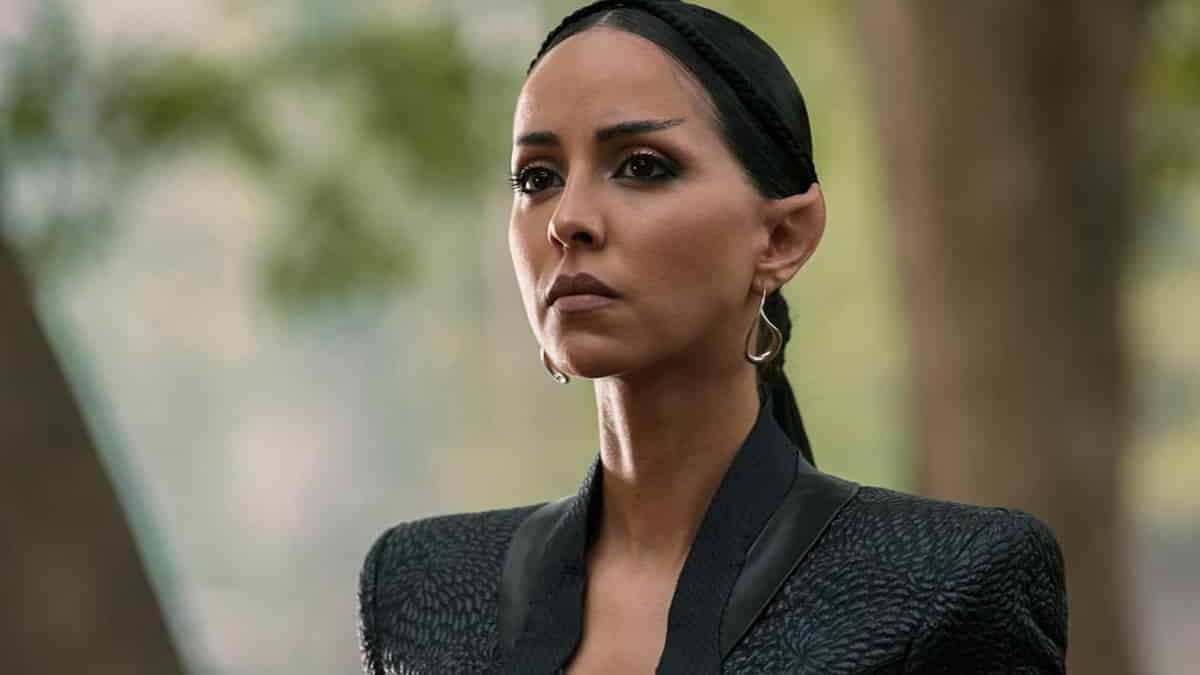 Now at the halfway mark, Strange New Worlds delivers an engaging excursion with the lyrical titled “Spock Amok.” Written by Henry Alonso Myers & Robin Wasserman and directed by Rachel Leiterman, the episode’s key theme, empathy, and the value of others’ perspectives is weaved into each subplot with striking effect.

“Spock Amok” opens with a nostalgic nod to “Amok Time” (The Original Series – Season 2, Episode 1) and takes a deeper look at Spock’s internal conflict surrounding his suitability for marriage to T’Pring (Gia Sandhu).

Spock (Ethan Peck) dreams that he has returned to Vulcan for their marriage rite (the koon-ut-kal-if-fee), but he’s soon confronted by his betrothed for being too “human.” She orders Spock to a lirpa duel between his human and Vulcan sides, and the dream haunts him long after he wakes, as he considers his insecurities and compatibility with his fiancé.

Following their near-miss with the Gorn (another nod to the original series), The Enterprise has returned to Starbase 1 (a venerated space station) for repairs while the entire crew prepares for shore leave. As Spock logs his itinerary for the break, he’s interrupted by T’Pring who enters and greets him formally. She makes critical comments about Spock’s quarters, saying they “look very human,” adding that she “found it hard to believe a Vulcan had slept” there. Spock coyly replies that he’s “redecorating” before informing her of pressing duties, forcing him to cut their rendezvous short.

T’Pring sullenly reminds him that his responsibilities had taken priority the last time they were together. Spock reassures her that he’ll be available to have dinner with her that night.

Spock joins Captain Pike (Anson Mount) and Cadet Uhura (Celia Rose Gooding) for a briefing with Admiral April (Adrian Holmes) on the R’ongovian Protectorate, a “small but vitally important” state between Klingon and Romulan territories. The territory is on a key route to the other side of the Beta Quadrant and is critical for Federation passage and expansion. La’an interrupts the meeting to report that the R'ongovian delegation had already arrived, and are demanding to speak with Pike. The R’ongovian explains that empathy is the cornerstone of their species and Captain Pike assures them that similarly, the Federation’s democratic process ensures no voice is overlooked. The envoy then agrees to begin the negotiations early, locking Spock and the others into hours of talks.

Meanwhile, Nurse Chapel (Jess Bush) and Erica Ortegas (Melissa Navia) are preparing to depart for shore leave and search for Doctor M’Benga (Babs Olusanmokun) in sickbay. M’Benga isn’t quite ready and the two discuss previous relationships with officers as they wait. When M’Benga emerges with his luggage, he’s still in uniform but wearing a hat decked out in fishing fare as he excitedly shares his fly fishing plans.

Una (Rebecca Romijn) and La'an (Christina Chong) are present in the transporter room to see their crew mates off. When Ortegas tells La'an that she didn't have to supervise the departure in person, La'an quips that was the only way to make sure it was done right.

M'Benga asks La'an and Una about their plans for shore leave and Ortegas jokes that they don't “shore leave,” they “shore stay.” M’Benga begins laughing about “the nickname” but backtracks when he sees Ortegas and Chapel’s adverse reactions. Number One demands to know about the nickname, and Ortegas confessed that the yeomen often styled Una as “where fun goes to die.”

A short time later, La’an and Una respond to a security breach in the airlock; there they find a Bolian ensign, Zier and Enterprise’s communications officer Christina. During a good cop/ bad cop montage, Una and La’an learn the two were playing “Enterprise Bingo,” a set of challenges secretly undertaken by ensigns. Una, t that she’s an “out of touch” senior officer and La’an both decide to complete the challenge to prove how fun they really are.

Spock realizes after the lengthy negotiations that he has once again disappointed his fiancée, though he only intended to prove to T’Pring he could prioritize their relationship. Upon advice he receives from Chapel, Spock decides that a Vulcan soul sharing with T’Pring will help each to better understand the other.

In a humorous turn of events, however, the mind-meld ritual goes awry and the couple’s katra’s (consciousnesses) end up trapped in the other’s bodies. Things run further amok for Spock and his betrothed—T’Pring has an upcoming rehabilitation assignment as a Vulcan criminal negotiator, while Pike arrives to tell d that the Rongovians have requested that the Vulcan take charge of the negotiations.

Both must carry out the other’s duties flawlessly despite the ridiculously high stakes. “It appears that hijinks are the most logical course of action,” Spock cooly points out to T’Pring. The stakes are deadlier in the face of stark truths:

T’Pring’s growing resentment for Starfleet as she presides over crucial negotiations in Spock’s body and Spock with his strictly scientific leanings, far removed from his field of expertise. To Strange New World’s credit, neither Spock nor T’Pring excels during the body swap—Pike must intervene to convince T’Pring (in Spock’s body) of Spock’s value to Starfleet before she totally derails the negotiations. Meanwhile in a “very human” moment, Spock (in T’Pring’s body) knocks out the criminal Vulcan Barjan T’or for being rude. Each character is put on a direct path to empathy and both are undone by the demands of their partner’s lives, which provides much to build on once M’Benga switches them back.

In his quarters Spock confesses his fears and frustrations about not being Vulcan enough to T’Pring. Now more cognizant of his commitment to duty, T’Pring shares that she feared he viewed their relationship as yet another task. “We must both want to be here,” she says, and to prove that they do, the pair consummate their relationship.