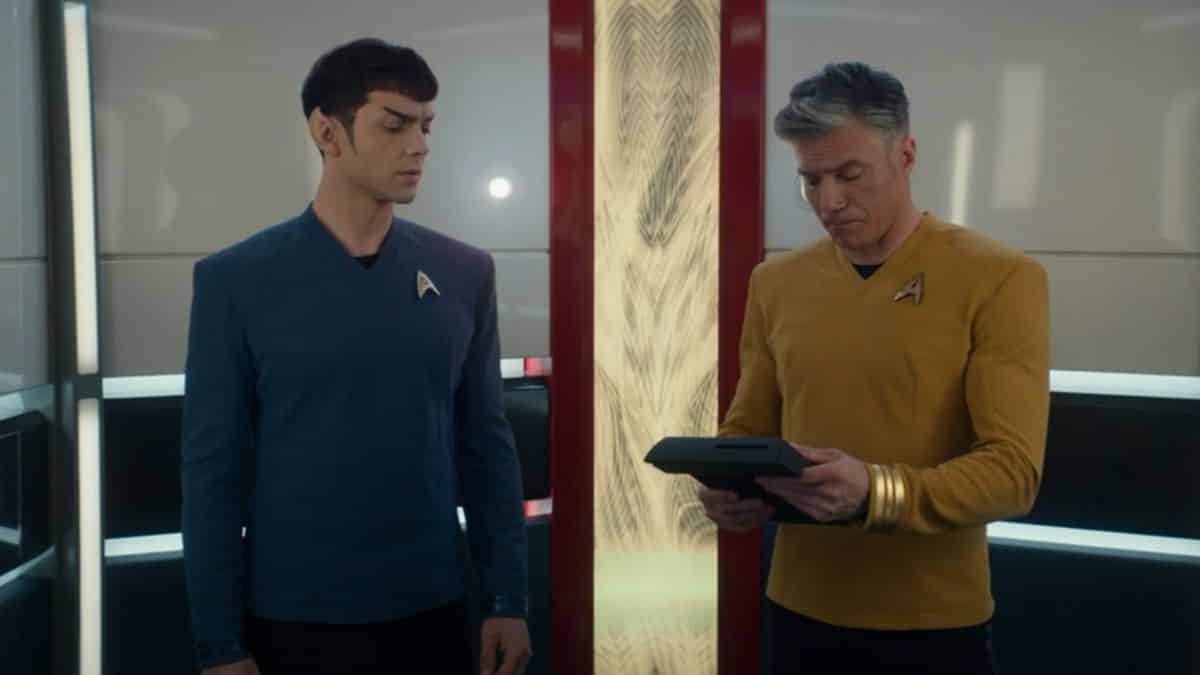 “A Quality of Mercy” is an episode situated in the future, with narrative points for season two already in place (perfectly underscored by Captain Pike's famous last words – “this isn't over.”)

Pike's (Anson Mount) story is again at the center, a full circle moment since the series' first episode. Written by Henry Alonso Myers & Akiva Goldsman and directed by Chris Fisher, the finale was a gripping episode that might even warrant a re-watch!

The series finale finds the Enterprise at the Romulan Neutral Zone heading to Federation Outpost Four with supplies. After sharing a meal with his lover, Captain Batel (Melanie Scrofano), Pike meets Outpost Four Base Commander Hansen. Pike is shocked when he meets the commander's young son, Maat Al-Salah (Chris River), who admires Pike and wishes to join Starfleet one day. The Captain recognizes his name as one of the cadets he fails to save in his ill-fated future.

During Pike's appearance on Star Trek: Discovery, his interaction with Klingon time crystals made him aware of his destiny: rescuing several but not all the cadets involved in a reactor accident where he sustains grave radiation injuries. This backstory was outlined in The Original Series episode “The Menagerie,” and Pike stays preoccupied with his unfortunate end throughout much of the series.

Pike is so shaken that he leaves the meeting abruptly. In his quarters, he attempts to simultaneously cheat fate and save Al-Salah's life by writing him a letter warning him of his destiny and dissuading him from joining Starfleet. But Pike is visited by an older version of himself from a future where the radiation leak never occurred, who comes to warn Pike against this decision.

Careful What You Wish For

Brandishing a Klingon Time Crystal, Admiral Pike casts the Captain seven years into the future, showing him the “unforeseen consequences” of his decision. In the future, Pike is still the Captain of the Enterprise, Uhura (Celia Rose Gooding) is a Lieutenant, Spock (Ethan Peck) is a first officer, and the typically sassy Ortegas (Melissa Navia) is especially tense.

Meanwhile, several Outposts are under attack: Two, Three, and Eight have already been destroyed, and the Enterprise watches as a weapon of “enormous power” also destroys Outpost 4. As they prepare to square off with the enemy, they're joined by another ship in the vicinity, the U.S.S Farragut, under the command of Captain James T. Kirk (Paul Wesley.)

Ortegas is convinced that the vanishing rogue weapon is Romulan. Spock determines that the ship has a cloaking device and figures out a way to track its current path en route to the Neutral Zone (confirming the vessel is, in fact, Romulan.) Ortegas, Kirk, and Spock insist on attacking, but Pike prefers a more diplomatic approach and wants to negotiate so as not to start another war.

Kirk devises a plan to engage the Romulan Warbird, but the Farragut is badly damaged in a surprise retaliation. The Enterprise fires back but is damaged as well.

La'an (Christina Chong) — now a Commander — is among the survivors on the Farragut, including an angry Captain Kirk, who blames Pike's trepidation for his now destroyed vessel.

They negotiate a two-hour ceasefire with the Romulan Commander, but the sub-commander, eager for a fight and sickened by diplomacy, summons reinforcements, an armada of Romulan Warbirds, to their location.

The Praetor, leader of the Romulan fleet, demands that the Enterprise surrender immediately, and those aboard should kneel, ending the niceties. She opens fire on the Enterprise, essentially declaring war with the Federation.

Meanwhile, Kirk, who had requested access to a shuttle and gone off to secure a backup plan, returns with a fleet of the robotic mining rigs commonly found along Outposts. Unknown to the Romulans, the ships are unarmed, and Kirk sends the decoys to distract the Romulans and shield the damaged Enterprise until it can warp away.

Pike faces the consequences of their brief brush with war when he finds Spock in the sick bay, having been critically injured in the barrage of fire on the Enterprise. A visibly shaken Nurse Chapel (Jess Bush) says that even if he survives his injuries, which include internal wounds, Spock's life will never be the same. Back in his quarters, Admiral Pike reappears, now that Captain Pike understands that trying to cheat fate has a disastrous chain reaction. Pike finally takes comfort in his sacrifice; Admiral Pike also assures him that in any variation, the collateral damage would be the same: Spock's life, endless war, and widespread death and devastation.

Back to the Future

Pike heads back to 2259 via the Time Crystals and deletes the letter he'd been writing to Al-Salah. He's content to be back on the Enterprise, but his moment is short-lived, owing to yet another plot twist.

Since Number One (Rebecca Romijn) revealed her Illyrian identity in ‘Ghosts of Illyria,' we haven't seen the full extent of the punishment for this supposed crime against the Federation. The matter finally plays out when Captain Batel of the Cayuga boards the Enterprise in a true cliffhanger coda and takes Una into custody for being a genetically altered Illyrian.