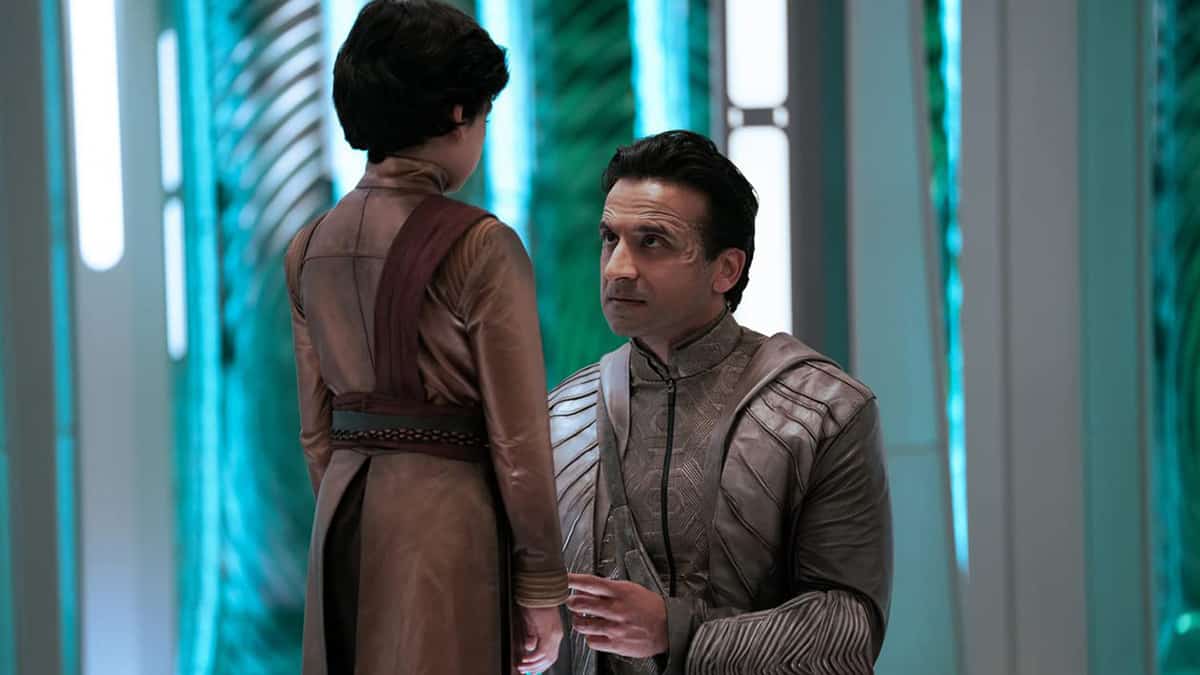 After the comedic relief of “Spock Amok” this episode proves the revamped franchise is as adept at moral quandary.

The plot and themes mirror many elements seen in classic Star Trek episodes including The Original Series‘ “The Cloud Minders,” The Next Generation’s “Conundrum,” and Star Trek: Insurrection, the feature film in which Captain Picard finds the fountain of youth. Expert production design and several layers of plot twists drive Strange New World’s haunting commentary on society, morality and secrets.

Captain Pike’s (Anson Mount) ship log voiceover reveals that the crew is currently on a cartographic mission at The Majalan System, a minor star cluster at the edge of Federation space. Pike was nearly killed here by a pulsar some 10 years ago, but he expects this trip to be less eventful.

Cadet Uhura (Celia Rose Gooding) is also currently on security rotation under La’an Noonien-Singh (Christina Chong), and the episode kicks off with the Enterprise receiving a distress signal from a non-Federation shuttle under attack. Uhura opens fire from the ship's phasers, severely damaging the combat cruiser.

The crew receives an urgent hail for evacuation from the distressed vehicle and the three passengers—an older man, a woman, and a young boy—are beamed on board the Enterprise.

Pike is surprised to find that one of the passengers in the transporter room is an old flame, Minister Alora (Lindy Booth)—she refers to him as Lt. Pike. He appears to be struggling with his feelings, and it turns out this is (only!) his second time rescuing her, the first incident being ten years prior. Also on the deck are Elder Gamal (Huse Madhavji) and his biological son, known as the First Servant of Majalus (Ian Ho), who’s sustained minor injuries and needs medical attention.

While they visit Dr. M’Benga (Babs Olusanmokun) in sickbay, Alora explains that the boy is a holy figure chosen by lottery and who exemplifies the Majalan people's maxim: “science, service, sacrifice”. She suspects the kidnappers were after the boy for ransom, as he’s to ascend to the throne and rule the planet in two days' time. Alora is, however, evasive when recounting the attack, suggesting the kidnappers could have come from a nearby alien colony and pointedly objecting to an investigation.

The CMO and Nurse Chapel (Jess Bush) are fascinated by the First Servant’s quantum bio-implants, non-invasive measures used by the Majalans to heal injuries. Elder Gamal admits that he was once a doctor, but now his only patient is the First Servant. The Elder expounds further on Majalas’ medical advancements, and his revelation that there is no disease among his people piques M’Benga’s interest, as that could be the breakthrough he seeks to cure his daughter. M’Benga puts the question to Gamal using a hypothetical patient but the Elder flatly advises that it’s illegal to share the life-saving procedures outside of the host species.

La’an continues with Cadet Uhura’s rigorous training regimen at the alien crash site. Spock (Ethan Peck) and Alora each find some unusual items—Spock uncovers a strange piece of technology, while Alora notices a discarded oath coin, given to the guards sworn to defend the First Servant. The other side of the coin has been tarnished, which is also forbidden.

Fearing the attackers are still at large among the group of guards, Pike insists on accompanying Alora to Majalas as a “friend”, for her protection.

Alora identifies the rogue Linnarean Guard during a vow renewal ceremony on the eve of the First Servant’s ascension and a chase ensues. In the final throes, Alora ends up stabbing the guard with his own knife before he can take her hostage. Pike offers to stand guard for a visibly shaken Alora, but she invites him inside instead as the sexual tension between the pair peaks. When Pike reveals what he knows of his future and demise, Alora urges him to consider a life on Majalas, essentially foiling the prophecy.

As Cadet Uhura’s training intensifies, La’an presents her with an off-the-record challenge: decoding a crate full of data chips she “liberated” from the crashed alien ship on a hunch. Conducting a thorough linguistics analysis, Uhura finds the “needle in the haystack” La’an has asked of her.

She determines that the tapes contained related dialects—the assailants were from Prospect VII, essentially an austere Majalan colony. La’an insists that Uhura present her findings to the Captain and Pike is summoned to hear her “very urgent report.” The Captain is blinded by his affection for Alora but the data raises more questions than answers—Why wouldn’t Gamal and Amora divulge the truth about Project VII? What was the true nature of their travels with no security detail mere days before the ascension?

Gamal is beamed back on board but the First Servant is missing. When Pike demands to know how this could happen, both Spock (Ethan Peck) and Uhura trace the trail back to Gamal. We learn that he orchestrated things with the enemy vessel, and that the boy has been beamed back to a hidden location on the Enterprise.

Spock locates the child inside a cargo crate on the ship’s deck. The boy insists that the Majalis need him despite attempts to bring him to sickbay, and Pike returns him to Majalas just in time for his ascension.

Pike has been invited to witness the culmination of the ceremony in the Sacred Chamber. However, things quickly take a turn for the worst. Pike can’t hide his horror as the lifeless, petrified body of the previous First Servant is hauled away from the “throne” (a machine that milks a child’s neural network to maintain Majalas) to accommodate the new “ruler”.

Pike attempts to stop the ceremony and save the boy but he’s knocked unconscious. Later, when he wakes in Alora’s residence, Pike is dumbfounded and disgusted that the Majalalan utopia is built on the suffering of a young boy. Pike exits the room in a rush, beaming back to Enterprise meters away from a sobbing Alora.

Shipside, Gamal visits M’Benga to offer his help with the “hypothetical (cygnokemia) patient” that the CMO shared days prior; “It stayed with me,” the Elder said. He cautions that it’s only a first step but M’Benga’s gratitude is visible as he loads Rukiya’s medical records for the Elder.

College Students: Are You Making the Most of Summer?