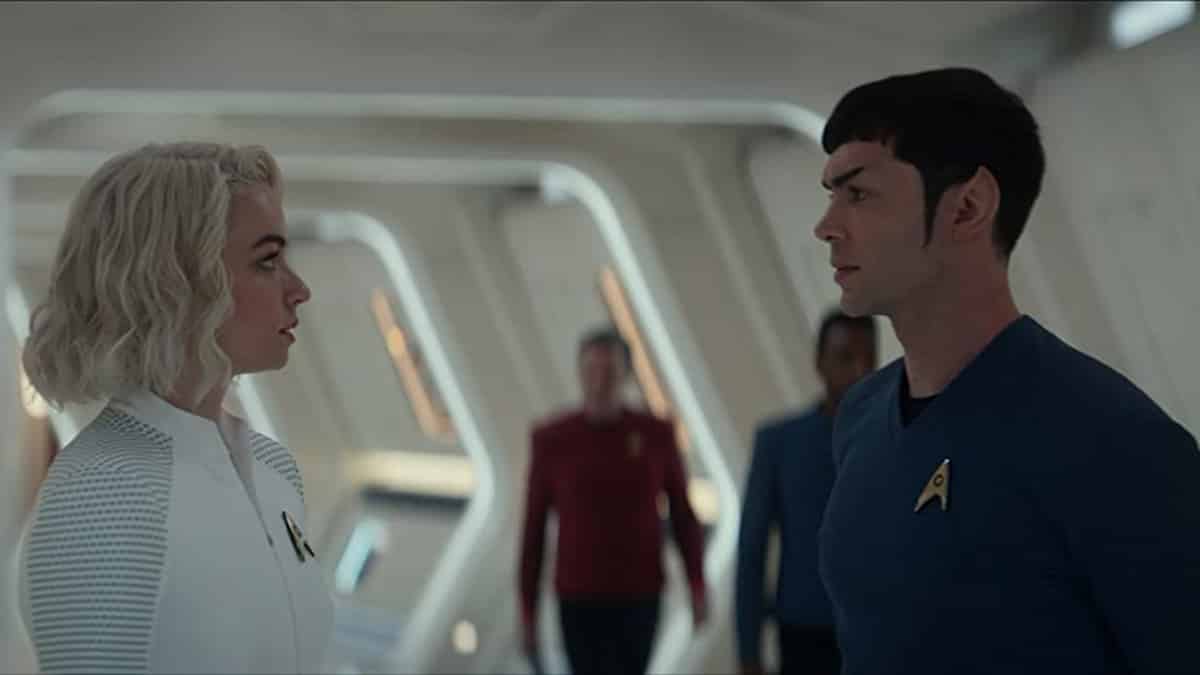 The second Spock-centric episode of the season was written by Beau DeMayo & Sarah Tarkoff and directed by trans filmmaker Sydney Freehand.

“The Serene Squall” starts off at the Ankeshtan K’Til Vulcan Criminal Rehabilitation Center on Omicron Lyrae as T’Pring’s (Gia Sandhu) log reveals more about the nature of her work. In an attempt to “spice things up” between her and Spock (Ethan Peck), T’Pring has been reading about human sex (she stops short of naming the Kama Sutra), however, Spock insists they pursue this research together.

As he and Nurse Chapel (Jess Bush) head to The Captain’s Table a distracted Spock shares his discomfort with T’Prng’s interest in human sexuality and asks her advice again. Spock is still struggling with reconciling his divergent cultures of origin’; Chapel urges him not to try to be smarter than the truth.

Meanwhile, the Enterprise is on the outskirts of a Federation colony under threat from a pirate vessel, the Serene Squall. We meet Dr. Aspen (guest star Jessie James Keitel), described by Nurse Chapel as “sharp,” but only on account of them having “razor blades for palms,” who sought out the crew’s assistance as the stranded colonists are also at the risk of being trafficked. by the space pirates.

Space piracy is a familiar sci-fi trope and the events of “The Serene Squall” recalls similar sequences in “The Killing Game,” “Starship Mine,” “Shockwave, Part II,” and “One Little Ship.”

Pike (Anson Mount) reveals that Aspen was a former Starfleet counselor (on Starbase 12) who became a humanitarian aid worker after eye-opening experiences on the Federation border.

La’an announces that two of the three colonial ships were destroyed and that they’ve located the third ship with the survivors within an asteroid field. Pike and an away team comprising La’an, M’Benga (Babs Olusanmokun), and others quickly beams over to free the hostages. While they explore, the Serene Squall’s crew invades the Enterprise. Meanwhile, Pike and the landing party are held hostage aboard the colonist ship. Before pirates can seize the bridge, Una initiates security measure Omega-Beta-IX, locking down all controls as they defend the ship and themselves with phasers.

Aspen is stunned by a phaser but remains uncaptured along with Spock and Nurse Chapel; Una is taken hostage (this seems to happen a lot).

Spock gets treatment for Aspen’s wounds as they continue searching for a solution. They confront Spock about his human/Vulcan heritage, questioning his obsession with balance and suggesting he may ultimately be neither. Spock, however, says this is nonsensical.

Nurse Chapel who has been trying unsuccessfully to send a distress signal reunites with Spock and Aspen. Spock overrides the lockdown so Chapel can send the SOS and transfer command systems to engineering. As he assigns a task to Aspen, they instead point phasers at the nurse and science officer, revealing that they are Captain Angel of the Serene Squall.

Elsewhere, Remy, (Michael Hough) a dense, burly Orion in temporary command tries to violently coax the Enterprise codes out of Pike. The Enterprise Captain insults Remy’s cooking and offers to prepare a proper meal for the pirate crew. The pirates enjoy Pike’s cooking and he uses the opportunity to convince Remy to sell them to the Klingons while noting the discordance between the pirates and their leader.

Angel explains the colonist's story was a ploy, revealing that their plan is to use Spock as a bargaining chip to free their lover Xaverius, a Vulcan prisoner being held at Ankeshtan K’Til.

In a call to T’Pring, Angel outlines their terms: release Xaverius from custody to spare Spock’s life. T’Pring identifies the love/duty dilemma but decides almost immediately to make the transfer. Not wanting T’Pring to be manipulated, Spock stages a quick ruse of his own. He tells T’Pring that he has given in to his human side by having an affair with Chapel and breaks off his engagement with T’Pring. Chapel plays along and the two share a passionate kiss in order to convince everyone.

Enraged by the foiled plan, Angel orders T’Pring’s ship destroyed but the Enterprise’s weapons have been immobilized.

Pike’s attempt to get the pirate crew to stage a mutiny works and Pike appears on the view screen and announces he’s in control of the pirate ship. Angel surrenders and escapes from the Enterprise, beaming away to their secret shuttle and leaving the Serene Squall and its crew at Starfleet’s mercy.

T’Pring tells Spock she saw right through his role-playing with Chapel. She admits that his human side was useful after all to convincingly convey the passion of the “fake” kiss. They reaffirm their engagement and get down to some other “rebounding” as well.

Both Chapel and Spock acknowledge that their relationship is purely platonic.

Since we've seen Angel make a secure escape, we know to anticipate their return in future episodes, especially given the nature of their revelations throughout the episode.

Spock explains that the Vulcan Angel was attempting to free is his half-brother, Sybok, one of the V’tosh ka’tur — Vulcans who have rejected the teachings of logic. Sybok is, of course, the villain from the movie Star Trek V: The Final Frontier, but outside of that film, has never been mentioned in the official Star Trek canon. But it seems that both he and Angel will return.

23 Digital Nomad Jobs for the Lifestyle You Deserve