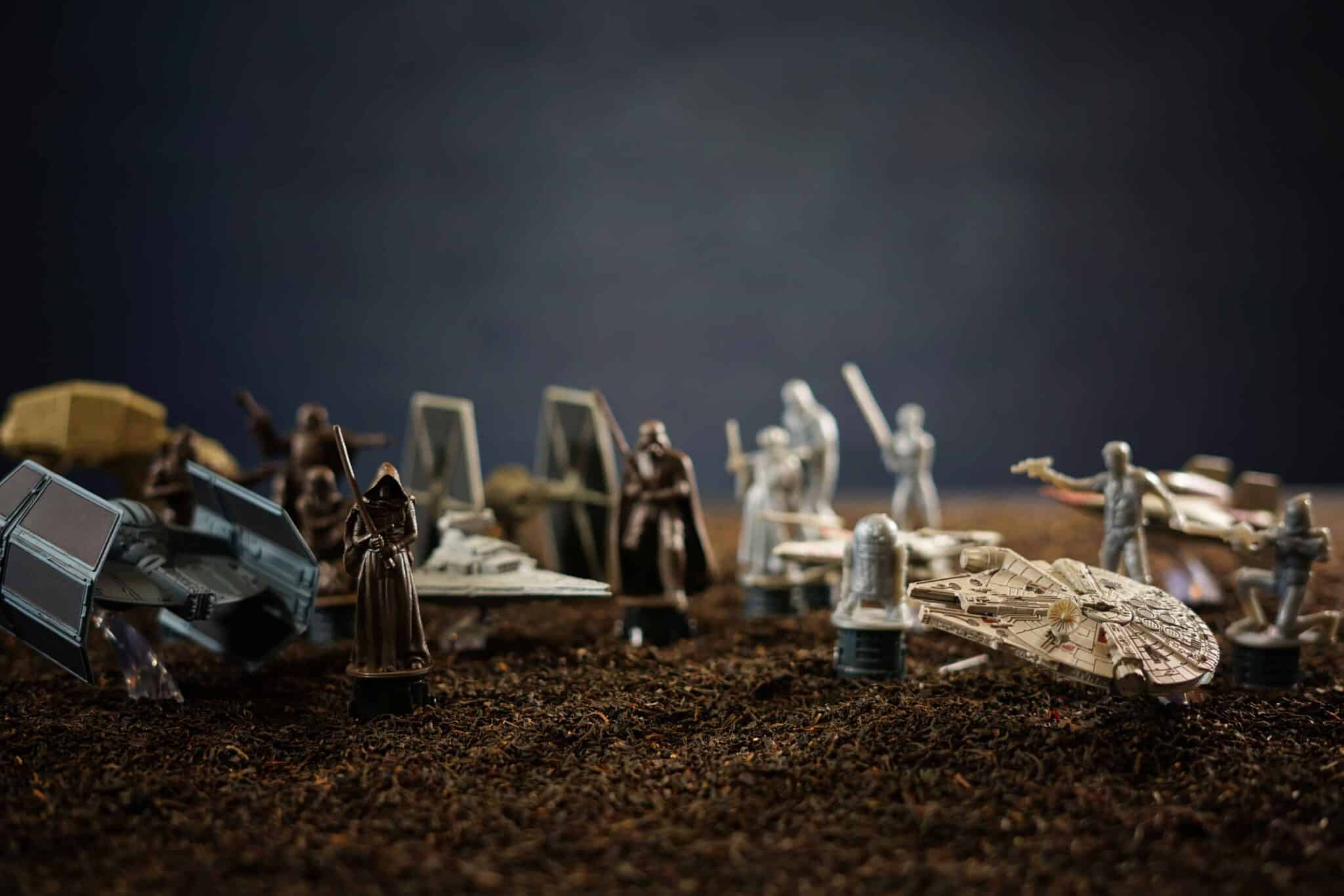 When it comes to Star Wars board games, you’re not short on choices.

These games join a long list of over two hundred Star Wars-themed board games. Whether you love classic board games like Monopoly or Clue or you and your friends prefer creating your own world with RPG games — there’s a Star Wars game for you!

Star Wars has wisely monopolized on the popularity of themed board games over the years.

In 1999, Trivial Pursuit released an Episode 1 focused edition, which now turns up in antique stores or on Amazon for just under $100. But fear not, all of these games won’t break the bank.

John Boyega recently tweeted about playing this game, and he seemed to think that it was a bit more difficult to follow than classic Monopoly. Considering Monopoly already causes more family feuds than any other board game… this one might cause feuds of galactic-proportions.

Unlike classic Monopoly, this game is only designed for four players and lets you choose to play Luke Skywalker, Finn, Darth Vader, or Kylo Ren.

This game includes nine playable pieces that allow you to play as a character from all three trilogies. Similar to landing on a Chance space, landing on Jedi Training or a Holocron space influences the outcome of your game.

Have you ever wanted to buy Tatooine or Naboo instead of buying Park Place? Now’s your chance!

While this game is called Risk, it deviates slightly from the classic game where the key to gameplay is holding territory and strategically attacking your opponent. The Star Wars edition requires you to play out the Battle of Endor and work to take down the Death Star.

The game’s three theaters of combat are designed to require a more strategic approach, allowing each choice to create a different outcome every time you play. You can play one-on-one or create teams to face off against the battle between the light and the dark side.

Do you think you know everything about Star Wars? With over 1,000 questions, you can put your knowledge to the test with your friends and families in this epic game.

While Rey and Kylo are on the cover of the game, most of the questions are focused on the Original and Prequel trilogies. This is the perfect game to play after a Star Wars marathon to brush up on the most minor details of the series.

Playing as Luke, Leia, Han, Chewbacca, R2-D2, or C-3PO, your mission is to stop Darth Vader before he strikes his next target. This 3-D cardboard board game isn’t quite like classic Clue, but the essence of the game remains.

Darth Vader’s plans are placed in a mission folder at the start of the game, and players must ask questions to solve the mystery.

It’s not quite as cheeky as Colonel Mustard in the library with a candlestick — but it’s a fun game for the whole family!

If you love Dungeons & Dragons, then the collection of Star Wars roleplaying games created by Fantasy Flight Games will be the perfect way for you and your friends to experience the Star Wars universe in a brand new way.

If you’re just starting out, they have a Star Wars: The Force Awakens themed beginner experience, as well as three standalone roleplaying systems — Age of Rebellion, Edge of the Empire, and Force and Destiny.

[Editors Note: If you have a local tabletop gaming shop please consider picking up these games at your local store. Not only will you be supporting local business you are likely to save some money and make some life long gaming friends.]

This game is not compatible with the other three roleplay games, but serves as a beginner's guide into the gameplay and doesn’t require any prep time like other RPGs.

Following a similar system as the other Fantasy Flight Games, The Force Awakens only focuses on four fully developed characters, and it guides you through the adventure experience. If you have never played an RPG before, this is the perfect one for you.

Thrust into the midst of a Galactic Civil War, you play this game as a member of the Rebel Alliance. This Star Wars experience is fully compatible with Edge of Empire and Force of Destiny.

As a vital member of the Rebellion, your character is given a duty that they must fulfill in order to lead the rebels to victory.

This game allows you to explore the galaxy as a smuggler, tracking down bounties, and making risky trades. It is fully compatible with the Age of Rebellion and Force and Destiny.

Each character starts out with an obligation that drives their motives — an expensive addiction, an outstanding debt, or a bounty. With every roll, you further your story and build a world around you.

Your choice of morality in this game defines the outcome of your Force-sensitive character. A path of compassion might lead towards becoming a Jedi Guardian, while a path towards theft and violence might tempt you towards the dark side.

Fully compatible with Edge of Empire and Age of Rebellion, this game allows you to create a Force-sensitive character to work alongside smugglers and the Rebel Alliance.

Are you looking for an extensive game that requires strategy, patience, and might last for several days?
Then you’re looking for one of the three best Star Wars strategy games out there.

Command your own tactical fleet with three capital ships and a squadron of ten fighters. You can choose to lead the Imperial fleet or the Rebel Alliance and face off in a tactical battle for the fate of the galaxy.

Gameplay allows you to build your own fleet and customize it to meet your preferred tactics.

With 150 playable pieces, this game allows you to decide the fate of the galaxy as you play as the Galactic Empire or the Rebel Alliance.

Each card drawn shapes the course of the conflict; whether you’re rescuing Princess Leia or increasing the strength of your starships, each choice has consequences.

This game provides two levels of gameplay — campaign and skirmish. You can play as a member of the Rebellion or a Stormtrooper as you face off in a battle in the wake of the Death Star’s destruction.

This game contains 30 individual missions, which could easily span days of gameplay and strategy.

Overall there are over 200 Star Wars board games with varying degrees of difficulty, skill set requirements, age preferences, and price points. What’s important is that you’re having fun while you play!

Disney Gallery: The Mandalorian Reveals the Magic Behind the Hit Disney+ Series