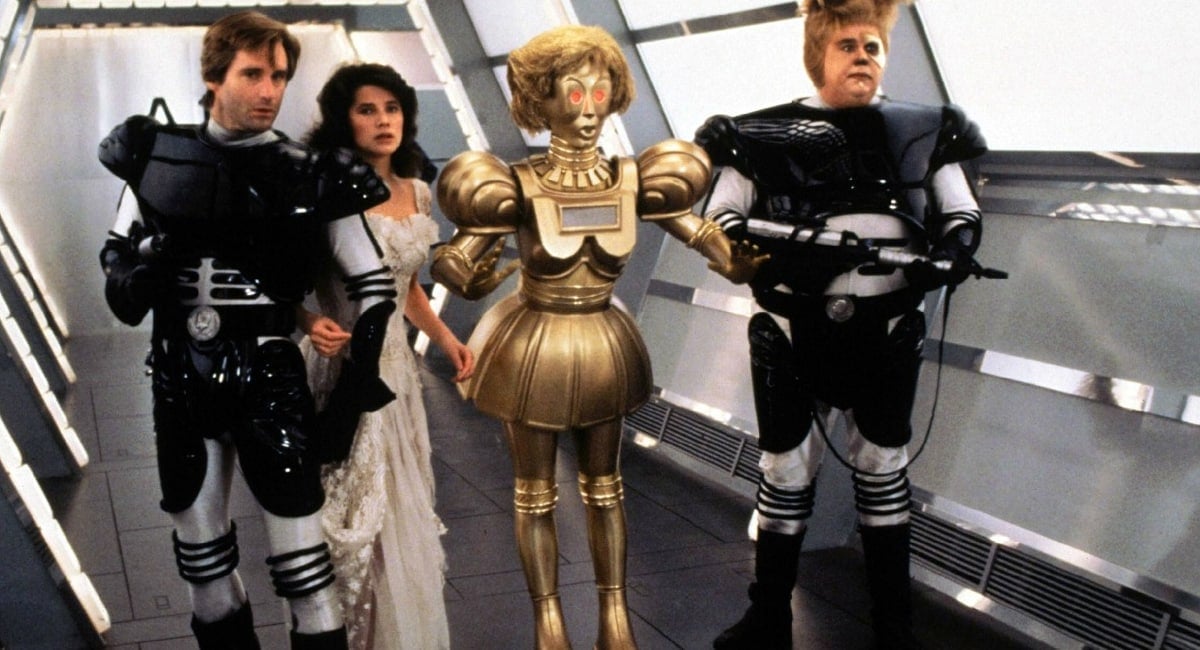 Hollywood is always chasing its last hit, and there have been few hits as massively influential as Star Wars: A New Hope.

After the film came out in March 1977, studios stampeded like raging Jawas to solder together the quickest, dirtiest, cheapest imitations, tributes, parodies, and/or amalgamations of all three. Below are a sampling of the highs, the lows, and the unwatchables when it comes to Star Wars rip-off films.

Ralph Bakshi’s Wizards came out almost two months before New Hope, so it’s obviously not a knockoff in the usual sense. George Lucas and Bakshi were making the two films at the same time at 20th Century Fox, though, and the parallels between them suggest more than a little cross-influence.

Both blend technology and magic; both feature twisted mutant aliens that manage to be simultaneously disgusting and adorable; both incorporate antagonists with more than a passing resemblance to World War II Germany. And both are obsessed with film traditions past—the secret weapon Death Star-analogue in Wizards is a film projector playing Nazi war films.

One of the most transparent Star Wars knock-off cash grabs of all time was perpetrated by the studio itself, in a stunningly ill-conceived Christmas special featuring proliferating Wookie relatives and very little plot. Art Carney, Diahann Carroll, Jefferson Starship and Harvey Korman vie to be the most thoroughly incongruous guest stars, while Harrison Ford, Mark Hamill, and Carrie Fisher all look as if they would give their blaster arms to be absolutely anywhere else.

All of which is to say, this is completely glorious; a window into a lost world long, long ago and far, far away when the studio didn’t quite realize that franchise world-building was the right path, and thought that instead, they could turn their corny serialized adventure into a corny variety show.

Ridley Scott said he was directly inspired to make Alien after he saw Star Wars, and the influence is easy to see in the visual style. There’d be no Nostromo without Star Wars’ dirty robots and clunky, filth-grimed Millenium Falcon, and the visceral ichor of Frank Oz’s muppet cantina squishes through the acid veins of Scott’s xenomorph.

Even Sigourney Weaver’s deadpan hardened cowpoke swagger owes a taciturn nod to Harrison Ford’s Han Solo. Of all the Star Wars sequels and imitations, this is the most gloriously ugly progeny—the one you want to watch again and again in awe and horror as it tears itself from its predecessor’s gooey stomach.

Low-budget hack master Roger Corman figured that the best way to do a Star Wars rip-off was to rip off the things Lucas had ripped off, but more blatantly. And by gum it works. Battle Beyond the Stars is the Star Wars via The Magnificent Seven via Seven Samurai space western you never knew you needed.

A ramshackle team of frantically hamming character actors from George Peppard to Robert Vaughn to Sybil Danning in a structurally threatened halter top gather to protect the innocent world of Akira from the forces of the evil Vader-I-mean-Sador. The movie may be silly, but that Kurosawa plot is sturdy even at the fourth or fifth remove, and the escalating body count manages to retain its poignance despite the predictability. All this and some solidly inventive special effects by a very young James Cameron makes this the one crappy Star Wars knock-off to see if you are determined to see a crappy Star Wars knock-off.

The plot is sub-B movie balderdash; Earth is under attack from a Ming the Merciless type figure who rants to stolen audio from Flash Gordon and keeps a golden brain in a box with which to break through the brain barrier of Earth? But Murat goes to his planet of women and steals the brain and melts it down into gauntlets and then fights a lot of monsters in fuzzy suits by jumping up into the air over and over? Also the bad guy steals blood and turns people into zombies.

Describing it makes it sound more fun than it actually is; there’s a lot of exposition and close-ups of Murat looking serious/constipated. Still, whatever its faults, it’s still significantly more enjoyable than The Phantom Menace.

Peter Yates’s picks up some space backstory and laser blasts from Star Wars to drape over its creaky clichéd fantasy superstructure. Alas there’s no Harrison Ford or Carrie Fisher here; the actors (including a young Liam Neeson) are impressively uninvolving, though there is some satisfaction in the Kurosawa-inspired willingness to kill them off one by one. Yates learned from Lucas’ backgrounds too; the landscape shots are well-framed, and the ersatz toothy backgrounds of the Black Keep have an inventively surreal Dali-esque aesthetic. As an aging husband of 20 years, I also appreciate that the ultimate triumphant superpower of Prince Colwyn (Ken Marshall) and Princess Lyssa (Lysette Anthony) is their weaponized marriage, which transforms into Beast-destroying flames.

Even given my sympathy for the bonds of matrimony, though, I can’t in good conscience recommend this. Krull fights the good fight to prove that thoroughly mediocre action movie blockbusters were around long before the MCU.

Nick Castle’s Star Wars rip-off is also a clever Star Wars meta riff; what if you (yes you!) turned out to be an amazing starfighter and flew off to save a Star Wars-like universe?! That’s what happens to Alex Rogan (Lance Guest) a trailer park teen whose skill on an arcade game attracts interplanetary attention.

Unfortunately, besides a turn by Robert Preston as a Music Man-like carny space recruiter, a mildly amusing glandularly-ignorant duplicate robot Alex, and some pleasingly nostalgic computer effects, that’s basically all the film has to offer. It’s like if Star Wars was just the final battle with the Death Star and a lot of Luke vacillating back and forth about whether to join the Rebel Alliance. You’d think that Star Wars dreams come true would be a bit more exciting.

At the time this was considered an incoherent derivative train wreck. Some 35 years later, it’s still an incoherent derivative train wreck, but charmingly so. The high concept is a future in which water is the most valuable commodity, controlled by the Templars of Mithra, whose ships are raided by our hero Jason (Robert Urich) and his ice pirate crew.

It’s much more tongue-in-cheek, and much hornier, than A New Hope, but it’s one of the few successors that manages to capture that film’s gleeful aesthetic of one rip-roaring adventure after another.

It took him a decade, but Mel Brooks finally got around to making the definitive Star Wars parody, complete with KFC jokes and a giant space maid whose vacuum goes from suck to blow. The core of the silliness, though, as always with Brooks, is the sterling insistence that Yiddishkeit is everywhere, even (especially?!) in space(!) Spaceballs puts the Jewishness back in Carrie Fisher’s princess and pulls out the schwartz for the battle against that space-Nazis-we’re-supposed-to-pretend-aren’t-Nazis.

Given Lucas’ penchant for weirdly clueless antisemitic stereotypes in his films (the Jawas, Watto), there’s a certain satisfaction in watching Brooks cash in while giving that bland gentile cosmos some chutzpah.

Akira is much more cyberpunk than space opera, and it's set on a post-apocalyptic Earth, not long, long ago, or far away. Nonetheless, director Katsuhiro Otomo cited Star Wars as one of his primary influences. You can see some of Lucas’ skeezy oddball aesthetics around the edges of

Otomo’s mottled mutants, perhaps, and that bad boy motorcycle future cowboy Shotaro Kaneda could owe some of his attitude to Han Solo. But the strongest link between the movies, as between all life, is the Force, which gets translated in Akira into an apocalyptic psychic force. Maybe Darth Vader was Tetsuo Shima’s father rather than Luke’s after all.

There are many more films that could be on this list, from the flirtatious 1980 parody pastiche Galaxina to the latter-day Star Wars-inspired Guardians of the Galaxy, with the Chewbacca-like, syntactically limited Groot. And what about Hardware Wars? The Force is everywhere, for better, for worse, and not least for profit.