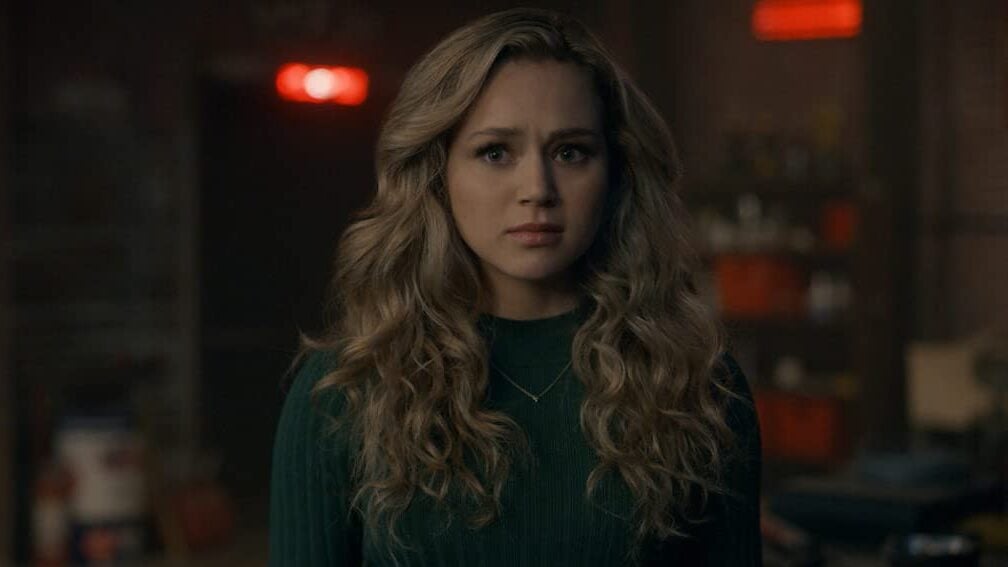 DC’s Stargirl Season 3 Episode 8 opens up right where it left off, with The Shade and Pat in the black and white Shadowland. The Shade explains to Pat where they are and says that Jenni’s brother must have the same shadow powers he has, but he doesn’t know why. At least he knows how to navigate this realm, and will get them out of there as soon as possible.

Things don’t go according to plan though as his power is corrupted by Jenni’s green lantern lights still and he cannot open a portal home. He tells Pat that opening a door there will often bring you to the place you need to go, but when he ends up in the diner face to face with a taunting The Gambler, they rush out the door. You see, The Gambler brought up how he refused to forgive him, although he begged his own sister Emily for forgiveness.

When they leave the diner, they end up in a trap of Pat’s imagination – The Pit Stop. However, it is not Zeek working on the car in front of him, but his father. This figure confronts him and says that he is pretty much the reason his parents fought. He tells Pat that he is worthless and he isn’t proud of him. When The Shade tries to warn that this place twists words, Pat admits that his father spoke every one of those words to him. Pat has clearly moved past this in his life because before exiting this room, he tells his father that he still misses him.

In the next room, The Shade is confronted with the image of his dying sister. When he tries to leave, he cannot. We see the green glow when he grabs the doorknob indicating that Jenni’s powers are once again conflicting with his. Pat kicks open the door and reveals a doorway filled with the green light.

They enter and are sent to a new location. It is here that The Shade explains his history with his sister. She was dying and when she asked him to come say goodbye, he never showed up. The Shade says that losing people is too hard for him.

Hints That New Characters Are Coming

Thanks to the Todd Rice issue Helix has gone into lockdown. As the camera pans through the hallway, we are introduced to a few more new characters, who of course are members of Helix in DC Comics. There is Tao Jones, Critter, Penny Dreadful, and Carcharo. Todd is telling Courtney and Jenni that he is in pain, and Courtney tells him to focus on his family. It helps for a brief moment, but he is then reminded of the man that told him he is sick for liking the same gender.

Jenni reaches out to calm him, but when she touches him green smoke appears, and then Courtney wakes up in Nurse Love’s office. When she confronts the nurse about lying to them in the past, she explains that it was for their own good. The nurse tries to send her home but when Courtney mentions she knows all about the Shadowland, and has been there herself, the nurse locks her in the office before rushing off.

Todd and Jenni are separated, and viewers see Jenni trapped in a cell that is designed to hold her in. She is told that she and Todd can never be together again.

The Mystery Person Is Revealed?

After half a season of seeing someone spy on Blue Valley, we finally discover who that person is. When Courtney confronts the security camera in the nurse’s office at Helix, she claims that she is powerful without her staff. That is when Mister Bones walks into the office. Immediately Courtney tells him that he cannot scare her, talking about his appearance.

Mister Bones then explains to her that this is the way he looks. His skin is transparent and he has a cyanide touch. Anything he comes into contact with dies, and that includes his mother. He explains that at Helix they teach the patients to survive alone. Bones says that everyone there was born this way, not like Courtney and her friends who have trinkets to help with their powers.

In true Courtney fashion, her hope and niceness help her out here. She tells Mister Bones her theory about how Jenni and Todd’s power is linked to emotion, and that Jenni is probably the only one that can help him through it. This is very similar to how she helped Cameron control his powers. She asks Mister Bones what the point of living is if you are just going to be alone. He decides to try this out, but cryptically warns that if he is wrong they will all die.

When Jenni enters the room where Todd is strapped down, he goes crazy again. With black smoke flying out of him, he then turns into his Obsidian form. Jenni gets encouragement from Courtney and walks up to him, telling him that she will not leave him. She holds him by the shoulders and viewers now see the two of them in a room where they were last together. Jenni tells Todd that they have now found each other and that their father left her the Green Lantern ring so they could do it. She holds out the ring towards him and the darkness goes into him.

Everything then settles down, and The Shade and Pat return as well. Nurse Love explains that everyone has a home there should they need it. It is discovered that at Helix they are free to come and go. Todd was never held against his will, he was there to get help. When Courtney mentions that they were spying on them, Nurse Love denies it all, and says they only know about them from doing their research. So is Mister Bones the one who was watching them or was this episode just set up to make us think that? The final shot is of a hooded figure punching his hand through security footage of Rick saying they are coming after them, from the previous episode, so it seems so.

As they all leave the grounds, Mister Bones tells Love that perhaps Courtney was right and isolation is not the answer. He then suggests forming a team – which is sure to come back around at some point.

The Shade and Pat talk, and The Shade ends up deciding to help Todd Rice learn more about the shadows. Jenni says that she could use some help too, as she needs to get to New York to find Sandy Hawkins, Sandman Wesley Dodds’ nephew. She explains that Sandy is how she knew where Todd was, and that she promised to help him with his nightmares about people in trouble after she reunited with her brother. The Shade reluctantly leads them through the shadows to head to New York.

This causes Courtney and Pat to take the bus home, where they have a conversation about redemption. Courtney says that The Shade helping them is proof that people can change. Pat is still very much affected by his time in the Shadowlands, in particular the fact that he was told Mike thinks about his mother everyday, and doesn’t like that Pat ripped him away from her and he was told to just get over it – even if his mother was a drug addict.

DC’s Stargirl Season 3 Episode 8 spends a lot of time exploring the Shadowland, but also diving more into the relationship between Jenni and Todd. One of the biggest issues about it is that The Shade and Jenni’s powers only seem to conflict when it is important to the storytelling. The Shade is able to move around inside the lands, but not leave. When he wants to run away from being faced with his sister, he is stuck in the room. Yes, this is important to the story, but the fact that they don’t corrupt one another unless the plot requires it feels cheesy and quite frankly, like a copout.

Making viewers think it was Mister Bones who was watching them for the majority of the episode, and then switching to the fact that it is once again a mystery was a bit annoying. Sure, that felt like a plot point that didn’t make any sense, so we are glad it is not the case, but it was deceitful and caused a lot of confusion for about thirty minutes.

Using The Shade, who has already worked with the JSA before, to reinvigorate Courtney’s hope that villains can be reformed was a brilliant move. The Shade is a fan favorite character, and so it was nice to have him back for a couple of episodes.

Taking two episodes away from the murder mystery was a nice break, but as this episode wraps up, most fans will be eager to jump back into it. Smart writing and pacing these last two weeks has helped to reinvigorate the hunt for who is to blame. And we can’t wait to see what happens next.

How To Save Money for Kids: Here Are 9 of the Best Ways

These 9 Organizations Have Dropped Kanye “Ye” West So Far