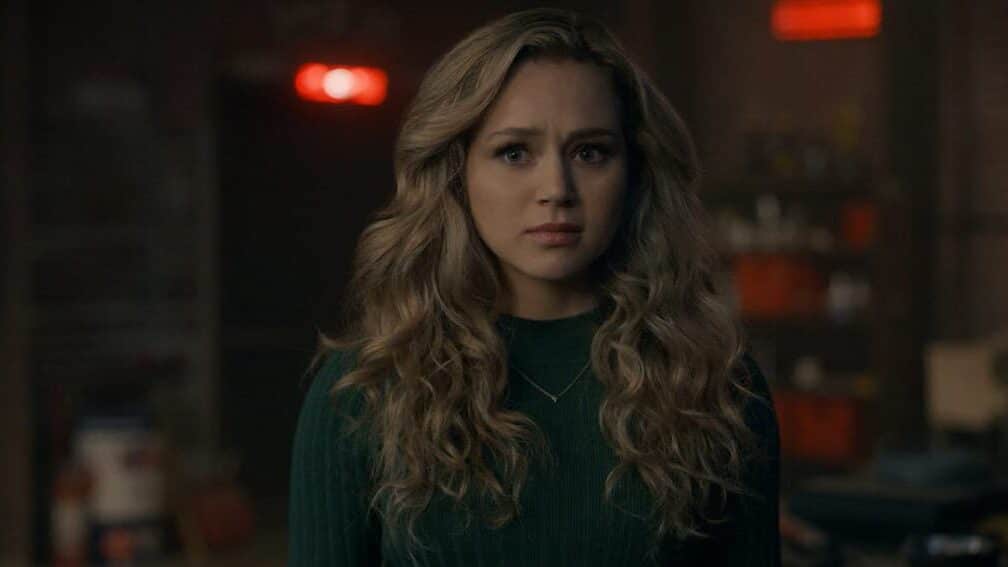 DC’s Stargirl Season 3 takes quite the turn in this middle episode. Up until now the main focus of the show has been on the murder of The Gambler. While that case is not yet solved, the show takes this opportunity to introduce a new character that was only previously hinted at. It even changes the theme of titles of the episodes, which up until now have all started with “The”. DC’s Stargirl latest episode switches to “Infinity Inc, Part One.”

It has been a long time since Green Lantern’s daughter has been seen in the DC’s Stargirl, but with episode 7 of season 3 she makes her return. Last viewers knew, Jennie was looking for her brother. She was mentioned briefly this season, hinting that she might return, and now the time has come.

This episode kicks off by showing her leave the foster home in Milwaukee with the small tin that contains her brother Todd’s car – and then a flash to Todd, who has finally joined the show himself. He and his boyfriend, Danny, are celebrating his birthday. Todd Rice is the twin brother of Jennie (also known as Jade), and he is being played by Tim Gabriel.

It becomes clear that Todd and Danny have been living on the streets, and Danny has encouraged Todd to break into a restaurant so they can celebrate his birthday nicely for once. When Danny leaves to go get ready, Todd opens the card that he left behind. It includes a bus ticket to go find his sister.

Elsewhere, Jennie finds her father’s Green Lantern ring and touches it. It glows green and flies off – just as we saw in the previous season. However, what we never saw before is what this does to Todd. He falls to the ground as his eyes light up green, and then black smoke flies out of him and all around. He yells at Danny to leave him as police show up to investigate the restaurant break-in. When they ask his name, he says he doesn’t know who he is.

Viewers will remember the troubled youth home, Helix, that Pat and Courtney investigated when looking for Jennie in DC’s Stargirl Season 2. It is here that we see Todd being dropped off by the police, still clueless as to who he could be. The woman in charge there knows exactly who he is, and even that it is his birthday. She says they are welcoming him with open arms, which is when he meets Mister Bones, a skull-faced character.

Comic book fans will know that thanks to the title Infinity Inc, things are about to get interesting. In DC Comics, Infinity Inc is a superhero team made up of the children of heroes, like the Teen Titans.

Many of the characters already in DC’s Stargirl were on the original version of this team including Jennie and her brother Todd, but also Beth Chapel, Rick Tyler, and Yolanda Martinez. There has been a division amongst the JSA members that is getting wider and wider this season, so could this all be a hint that they are about to go their own way from Courtney?

Back in Blue Valley

Things are a bit strange in Blue Valley as everyone now knows that they are being watched by a mystery person on the security cameras. As Beth works to get the power turned off, they are all putting on a show, pretending everything is normal while also not mentioning anything about The Gambler’s murder or their investigation.

Courtney and her family are eating dinner, Jakeem, Rick and Zeek are playing Perfection at the Pit Stop, and Yolanda is at work at the diner. Yolanda’s mother calls and lets her know she is aware she hasn’t been working late at night, and has instead been doing something else. Yolanda tells her that she will explain the misunderstanding to her when she gets home.

When Beth brings a blackout to Blue Valley, no one knows how much time they will have. They all jump into action, pulling out their flashlights and searching for the hidden cameras so they can uninstall them. The mystery person who has been putting together a puzzle while watching their every move? Not very happy. They slam the puzzle down on the ground in anger.

Yolanda ends up in a serious fight with her mother, who claims she cannot trust her anymore. She kicks her out, and she runs away to Courtney’s house, saying she doesn’t know where else to go. At the school, Rick and Beth are looking for the cameras. Rick is enjoying not being limited to just an hour of strength and is going overboard on destroying things. When the power comes back on, he looks right in a camera and lets the mystery person know he is coming after them before smashing it.

The Shade left Blue Valley early on in the season, but he is now back. During the blackout he arrives at the Whitmore/Dugan home and tells Courtney that he needs her. When she says that Sylvester has the staff at the moment, he says he doesn’t need the staff, he needs Courtney. The Shade then grabs her and Pat and disappears with them.

They arrive at an unknown location where he explains that the person he is with needs them. Turns out it is Jennie, who tells Courtney she found her brother and needs their help. She says he is upstairs and that they are at the Helix home for troubled youth. Jennie goes on to explain that he has been their prisoner and the nurse lied to them when she said he left.

The Shade says that he was drawing in a mysterious emerald light, which was hurting him, while he was accessing the shadows. He traced down the source of the light which is how he came across Jennie, who doesn’t have any control over the Green Lantern ring because the dark and light are mixing together – corrupting both the ring and the shadows.

This all started last season when the JSA was fighting Eclipso. She used the ring to destroy some of the darkness but instead it was sucked into the ring. This is what was causing the glitches in The Shade’s power, and he believes she needs to expel the darkness from her ring or order for both of them to return to full strength.

Courtney thinks that the only way to do this is to help Todd, Jennie’s brother. The Shade reluctantly agrees to help, so that he can return to a pain free life. The camera pans to the upstairs where it is revealed that Mister Bones and Nurse Louise Love have been running experiments on Todd for six months now, and say he has only gotten worse.

Courtney, Jennie, The Shade, and Pat break into the room holding Todd, but he says that he can’t leave the room or he will destroy the world. He also doesn’t know who she is until she introduces herself. When she grabs onto him there is a flash of their past and then he arises as a dark and smokey figure. He engulfs everyone. Pat and The Shade awake in a black and white town, and the episode ends.

A Nice Change of Pace

DC’s Stargirl season 3 episode 7 welcomes a really nice change of pace. Not only are we introduced to a new character, we get to visit Jennie who fans have certainly missed all season. While the investigation is still going on, this episode was not hyper-focused on tracking down the killer, which was much appreciated. Still not a whole lot of action, but episode 7 certainly propels season 3 forward in a way that will have fans eager to see what happens next.

How To Turn off Captions on Twitter Videos? – (Updated 2022)