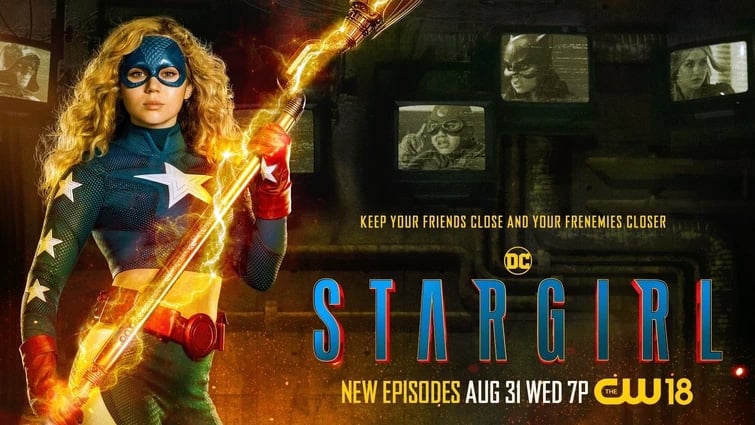 Season 3 of DC’s Stargirl is called Frenemies and if that is any indication, we should all expect our heroes and villains to be forced to work together throughout it. The first episode indicates that this is indeed the case. With suspicions sure to mount as the episodes go on, will this ultimately be the demise of our heroes – or even Blue Valley?

Fans catch up on where their favorite (and not so favorite) characters are and what they are up to because of a smartly done, brief montage, that shows a glimpse at pretty much all of the big players.

Jakeem Williams is seen riding his bicycle and delivering newspapers with Thunderbolt (remember that pink pen?) in his pocket. He delivers a paper to Zeek, who is working at Pat’s garage, as well as Richard Swift, AKA The Shade, who seems to be living a normal life in a normal house. Thunderbolt appears telling Jakeem to pump faster and get away from The Shade, mentioning how spooky he is. This is where it is noticeable that the voice for Thunderbolt has changed and is no longer Jim Gaffigan. The new voice doesn’t try to do an impression of him, instead bringing a new take on the character.

Beth wakes up to her parents yelling “Good morning!” It seems that they have worked through their issues and are now back together. They have breakfast in bed ready for her, once again being the clingy family from the first season of DC’s Stargirl. However, it seems that Beth is over it, as she looks at her phone to messages from Courtney saying that her family is finally leaving their vacation in Yellowstone and heading back to Blue Valley.

Rick Tyler, AKA Hourman, is seen in the woods digging. His strength runs out and he checks the timer, just 33 minutes. After breaking last season, it still is not up to full power. As the camera pans out, it looks as though Rick is either shoveling a big pile of dirt which looks a whole lot like he is burying Grundy, who he surprisingly became friendly with in the season 2 finale.

Yolanda is leaving church when she spots Cindy walking down the street. She purposefully heads in the opposite direction. Cindy then passes an old lady carrying groceries and does something that fans never would have expected her to do – she takes the groceries from her and offers her an arm, helping her get to where she was going.

The Whitmore’s new neighbors, Artemis Crock and her parents Lawrence Crock and Paula Brooks jog past her house as they get their morning exercise. Steven Sharpe, The Gambler, is back in Blue Valley. Fans hear him mutter “home sweet home” as he walks down the street, indicating that he is planning on staying.

These short clips are a great way to explain where the main characters have been during the break of the show, and what they are up to now. Montages almost always work in a show like this, and DC’s Stargirl perfectly uses one to kick off Season 3. In less than three minutes the viewers are up to date, and ready to get this season started.

Sylvester Pemberton, AKA Starman, has been staying with Courtney and her family, and took the opportunity of their family vacation to Yellowstone as a way to fix up the house. It was much needed after the massive fight that took place there at the end of season 2. They are all amazed by everything he accomplished while they were gone. One such thing was building a display case for Cosmo (the Cosmic Staff that was one of his but is now Courtney’s). She seems quite upset by this as it is placed next to his bed. Surely this is going to be an ongoing thing – them trying to figure out who truly wields the power of the staff now – throughout the season.

At the start of DC’s Stargirl season one it was made clear that Starman was dead, however, his return last season raised some questions that were never answered. Season 3 wastes no time before diving into possible explanations, however. Starman confesses to Courtney that he doesn’t know how he is alive again, exactly, but does admit that he woke up in his own coffin. His theory is that when she bonded with Cosmo, it awoke his bond with the staff as well, allowing him to be revived.

The Gambler shows up at Courtney’s door and asks for forgiveness. He explains that he discovered he has a daughter, named Becky, who was given up for adoption by her mother. He has returned to Blue Valley in order to make amends with those he has harmed and hopes that one day his daughter will want a relationship with him. The Gambler confesses that he knows she is not a role model by any means, but that he feels it was his father abandoning him as a boy that set him down a bad path and he doesn’t want that for his own flesh and blood.

Considering that the Crocks live across the street from the Whitmore/Dugan home, they saw The Gambler stop by. The next morning Crusher is found in their kitchen. He is not only trying to get Pat back on the workout and nutrition regimen that he started back in season one, but he is there to warn them that The Gambler was only ever in it for the money and is not to be trusted. The Shade agrees with this, as when he is approached by Sharpe at the diner, he uses some of his shadow powers to scare him off.

Next, the new (young) Justice Society of America meets up at the lunch table at school. Yolanda is telling Courtney to be careful of Cindy, who she still hasn’t forgiven. Beth is talking to her parents on her goggles, clearly getting sick of them putting all their energy into her again. When Rick shows up, it is confirmed that he was indeed burying Grundy. The Shade had helped him by telling him places he could try to in an effort to bring him back. Rick explains that it hasn’t worked yet.

Cindy then shows up and sits with them. It quickly becomes clear that she has been invited to join the JSA by Courtney and Beth, but that Rick and Yolanda do not approve. Speaking of new members of the JSA, Artemis Crocks’ mother shows up at Barbara’s office and tells her that she wants nothing more than to be a part of the team and that she will prove herself if she must.

Which is exactly what she does. When trouble arises the JSA arrives to stop the thieves, but Artemis was following them and takes on the crooks all by herself. She calls it a try-out before she disappears into the night. It is soon discovered that the gang are known associates of The Gambler, which surfaces doubt that he really has changed and returned to Blue Valley to find his daughter.

After Sylvester uses the staff to go flying alongside Pat and his S.T.R.I.P.E. robot, Courtney comes up with a plan. He can use the staff and be Starman while she is at school, but she has it on nights. Essentially, Starman is back, but Stargirl is still here to stay.

Within the final moments of the episode, we see Sharpe discovering some camera feeds via his laptop. They show the inside of Beth’s home, outside of Courtneys, and even the outside of his trailer. As he investigates, we are shown The Gambler looking into the camera near his trailer as he is seemingly murdered right as the feed cuts. The JSA arrives intending to interrogate him about the gang. Of course, Cindy is ahead of them all – and the rest of the team walks up to see her holding a gun over his body. Trust is already thin, and this certainly won’t help. She states that she did not do it, but will everyone believe her?

The premiere episode of DC’s Stargirl season 3 does a great job of setting up for what is to come. There are a lot of little breadcrumbs that are sure to become something bigger as the main plot and subplots develop. Leaving off on a cliffhanger is what fans have come to expect from the series, which only makes viewers even more excited for the next episode.

With the season being titled Frenemies it is clear where things are going, which does make it a bit predictable – something Stargirl has been from the start. There were no big twists or turns in season three episode one, except perhaps for The Gambler’s murder. However, with a title like “The Murder”, we all knew something was coming in this episode, it was just a matter of who. This is a great start to the season, and we can’t wait to see what happens next.

14 of the Best Things To Do in Atlanta, Georgia