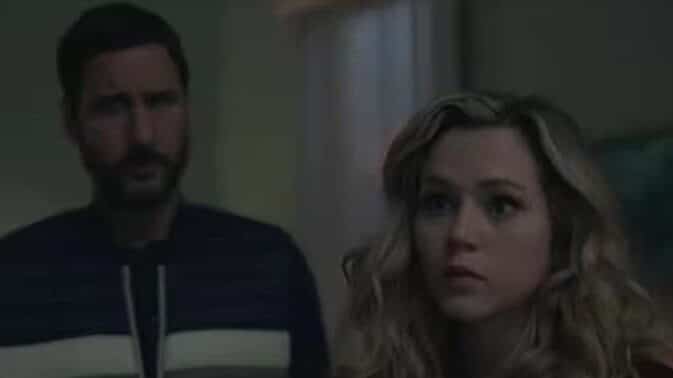 DC’s Stargirl season 3 episode 4 is titled “The Evidence” and it dives further into the mystery surrounding the death of The Gambler. So far there are a lot of suspects, and the Justice Society of America isn’t getting any closer to who the real killer is.

However, viewers have an interesting perspective in that we get to see over the characters, and Sylvester is looking more and more guilty. However, since Sylvester was attacked at the end of episode 3, that theory might be thrown right out the window.

This episode kicks off with Cameron going full-on ice powers. It has been shown that he can do what his father was able to do in the past, but this episode takes it to a whole new level. Clearly, he is still caught up in Courtney, as we see him pick up a snow globe with a figure of her inside. While holding it he becomes upset and ends up freezing the liquid inside of the globe, then drops it and it shatters. His grandparents, who are very much pushing him to the dark side, tell him that with practice he will be able to control his powers, so that he may cause their enemies to suffer.

The cosmic staff wakes Courtney up in the middle of the night and flies her to Sylvester, who is knocked out from being picked up and dropped hard by an unknown source. Once in the hospital, they learn that he has similar stab wounds to what The Gambler had. Beth’s mother is the doctor overseeing Sylvester’s injuries, and this tragedy helps her realize there is a cost to being a superhero sometimes. Beth’s parents were so caught up in the excitement of Beth becoming Dr. Midnite that they didn’t even think about this side of things.

Yolanda and Rick are on the phone discussing the incident and trying to decide if the killer is now after the JSA. Considering how this episode started out, Cameron is now looking more suspicious. Especially since we know he can form icicles and is starting to try to control his powers. When Yolanda’s mother comes in to see who she is speaking to, she lies and says they need her for a shift at the diner the following night (which is very much a lie as she just wants to get together with the JSA to help solve the murder). It is during this conversation that viewers learn Yolanda’s father has lost his job and that they have a realtor coming to see the house.

When Sylvester finally awakens, he says that he was ambushed but does not know who it was that attacked him. Jokingly, he says he can now confirm from personal experience that the killer is very strong. Courtney asks him what he was doing out there and he confides in her that he was looking for new evidence since all leads had dried up.

He admits he didn’t take the staff because it was her turn with it and a deal is a deal. She says that if she is not around and he is going to do something dangerous and needs the staff, he should take it. He replies that this goes both ways.

When the original Dr. Midnite shows up to see how Sylvester is doing in the hospital, the camera pans out and we once again see a mysterious figure tuning in to security footage. As Dr. Midnite inspects Sylvester’s wounds he comes to a realization as to how he is now back in the land of the living. The theory is that the cosmic staff infused its energy with Sylvester.

Over time, as he was buried in the ground after being assumed dead, it healed him. His wounds from the attack at The Gambler’s trailer are already healing at an alarming rate, proving this theory likely to be correct.

Next, the JSA is seen exploring the crime scene hoping to discover new evidence. Since the title of this episode is “The Evidence,” it was pretty obvious that this was going to happen. So when Beth’s goggles discover a trace of DNA in a single skin cell that doesn’t belong to Sylvester, it comes as no surprise.

After her goggles make an analysis, it is learned that the DNA is not human and is unidentifiable. Beth talks this over with Chuck, who says he recalls this happening before with one of the JSA’s old enemies – Cindy’s father, Dr. Shiro Ito AKA Dragon King, who was presumed dead after the first season finale.

When this is brought to the attention of the JSA, they immediately start to doubt Cindy’s loyalty again. Courtney butts in and finally explains what she saw in the Shadowland: that Cindy was never treated like a daughter by her father, but instead like a lab rat. She says that knowing what she experienced, there is no way that Cindy would work with her father again.

Meanwhile, Mike and Jakeem have the same idea about Cindy’s dad. Thanks to Thunderbolt’s hint that the killer has many names, this seems to be the most logical choice for them. This connection feels a bit weak, considering the majority of villains (and heroes for that matter) have at least two names – their real name and an alter ego. Either way, this is the suspect they have landed on and they decide to ditch PE and use S.T.R.I.P.E. to try to do some investigating. This is all in an effort to be taken more seriously.

At the school, Courtney stumbles across Cameron cleaning up his art supplies. When he reveals that he is quitting art, she tells him that he is talented, art can help with his trauma, and he should do anything but quit. In a fit of rage, he explodes cold burst and snow out of his body, knocking her to the ground and freezing the entire art room. She isn’t scared though, instead asking him what happened. He explains that his family has had this gift for generations and used it to help people – which we know to be untrue.

He goes on to say that his father’s death was not an accident, but he knows he died trying to save people. Courtney pushes to see if he knows of any details, but he says his grandparents will not tell him, not yet anyway. He explains this is why he has been keeping his distance from her – that he doesn’t want to hurt her. She tells him that she is not afraid of him and she will stick by his side. Things aren’t likely to turn out well between the two, but only time will tell.

Back at Pat’s house, Sylvester reveals he's thinking about retiring as Starman. He has been quite conflicted since returning, which we've seen time and time again this season. Pat shows Sylvester the suit that he was hand sewing last week. Turns out it was a suit for Sylvester. Thie gesture convinces him to stay on as Starman.

This suit comes to him with perfect timing, as Yolanda and Rick come looking for Courtney, who is still talking with Cameron. They explain that all signs lead to the Dragon King as the villain that killed The Gambler and attacked Sylvester. They think he might be lurking in the tunnels under Blue Valley. Sylvester tells the kids he will suit up and join them on the hunt.

Courtney has proven over and over that she is a decent human being. She only wants to help people and that is exactly what she does for Cameron at the end of the episode.

Her suggestion to use his powers to express himself which he normally does with his art helps him tremendously. He then makes it snow and finally feels in control of it all. He leans in and kisses Courtney, thankful that she is there for him.

In the final scene of DC’s Stargirl season 3 episode 4, viewers witness a secret that Cindy has been keeping. Every now and then we have seen her grabbing her arm, almost as if she is in pain. Well, it is now revealed that, most likely thanks to all the experiments her father ran on her, she is turning reptilian. She pulls her sleeve aside and we see green moving skin, with a voiceover from Beth about that skin cell she discovered at the crime scene.

So, is it Cindy’s father who is the murderer? Or is it, in fact, Cindy that is not worthy of redemption? Something this show has always done a great job of is keeping the audience on their toes. Even if we think things are predictable, there is always a twist or turn coming. This episode didn’t give us a lot of action, but we did get the reunion of Cindy and Cameron, and a few more suspects to explore.

Time To Get Spooky! Simple Halloween Decorations To Transform Your House