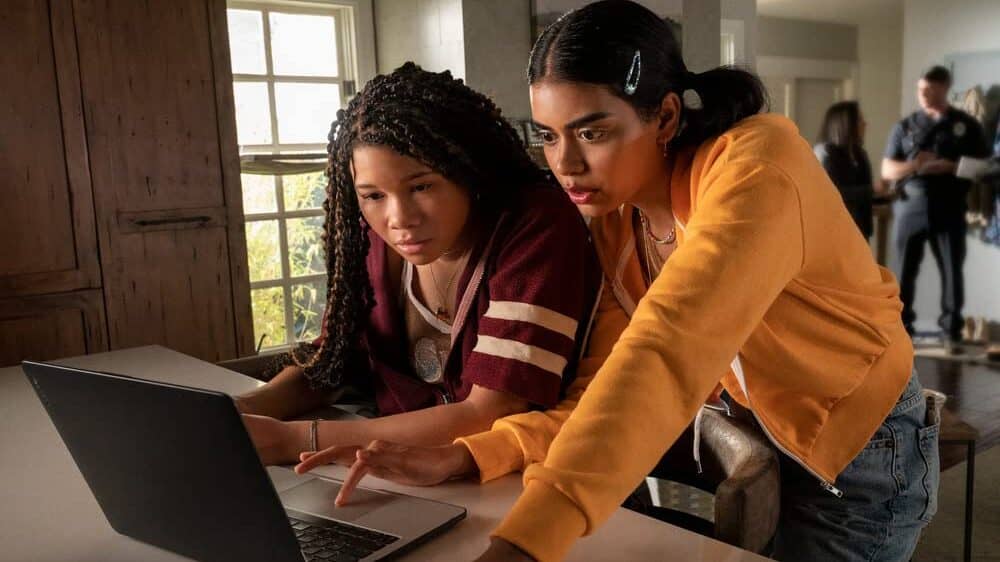 A question: does your demographic contain the final letter of the alphabet? If the answer is no, get ready to feel old, because the sequel to the screen and smartphone set 2018 thriller Searching has arrived, and there’s an escalating series of twists and turns as Gen Z pulls out all the digital stops to track down the olds in Missing.

Aside from a shout-out to the original’s gone girl Margot Kim, there’s a whole new set of characters to make use of an already far more expansive set of tools with another familial love story as its heart, in this case between 18-year-old June (Storm Reid) and her mother Grace (Nia Long), who disappears on vacation in Columbia with her boyfriend Kevin (Ken Leung). And much like Rian Johnson got some new toys to play with after Knives Out, Missing peels back its digital glass onion to reveal a new set of layers to its mystery.

Aneesh Chaganty isn’t around for directing duties this time, but he and his Searching co-writer Sev Ohanian still get a story (if not a screenplay) credit to tell a far more blameless tale of familial estrangement. It was one thing for John Cho’s David to lose track of his daughter in the wake of his wife’s prolonged and ultimately lost battle with cancer, but it’s a rare teen who manages to see their parents as fully fleshed out human beings while the adult they’re longing to become struggles to get out.

June’s backstory begins in 2008 (I mentioned the whole old thing) as a video memory with the father she clearly adored before his own passing from cancer is edited to its happiest moments, sans the telltale signs of blood which indicated darker times to come. Flash forward to almost the present, and June is now a normal teen who’s trying to get along with her mom’s new love and evade the adults in her life so she can throw a rager while they’re away.

It isn’t until she’s late to pick up her mother from the airport that June realizes something is wrong. As she gets a little help from Google Translate to set off all the alarm bells, she realizes that it’s not only her mother’s new beau who has a past, but Grace as well, and it may be the key to unraveling her disappearance.

Like many a scared kid, June first turns to the adults in her attempts to rescue her mother, but (thankfully for viewers) that doesn’t last long. As the FBI quickly proves too slow (and too legal) for her liking, June quickly starts hacking the grown-ups, figuring out their passwords in a matter of minutes, tracking their location histories, and snooping through their emails and searches.

Even she needs a little assist sleuthing in Columbia though, and she manages to tap the country’s TaskRabbit equivalent and hire Javi (Joaquim de Almeida), a man of a certain age who’s actually quite helpful and has his own familial dysfunction. As he kindly gives his time and advice and assists with putting a human face on satellite and the EarthCam stand in footage which allows June to recreate her mother’s timeline before vanishing, it would be easy to get exhausted as twist after twist serves up further complications during the nearly two hour runtime.

Or…does it? It would likewise be easy for Missing to lose itself in its own ambitions, but much like Glass Onion, what seems to be an entirely modern phenomenon might just turn out to be the same damn heartbreaking story. Missing contains its own familiar sights, with some of the same lessons about family and coming of age, as the accelerated timeframe forces June to realize that many of the adults who seem to be thwarting her have actually loved and protected her throughout her childhood.

Reid is of course fantastic, feasibly and sympathetically portraying June from laidback kid to increasingly desperate young woman who gets a crash course in the many ways the most genuine of online connections can contain all the shimmer of a mirage that disintegrates into the bracing realities of non-Internet life. Some of the discoveries are predictable, but the fantastic script and fleshed-out characters ensure that audiences won’t see all of them coming, with bits of humor along with the reveals that will shift allegiances on a dime, playing into many of the ways we often thoughtlessly explore and switch sides in online discourse, even when it could cost people their lives.

Unpredictable thrillers can seem like an impossible task in our current moment, but Missing is a study in how even a life lived fully on the grid still leaves plenty of room for mystery.