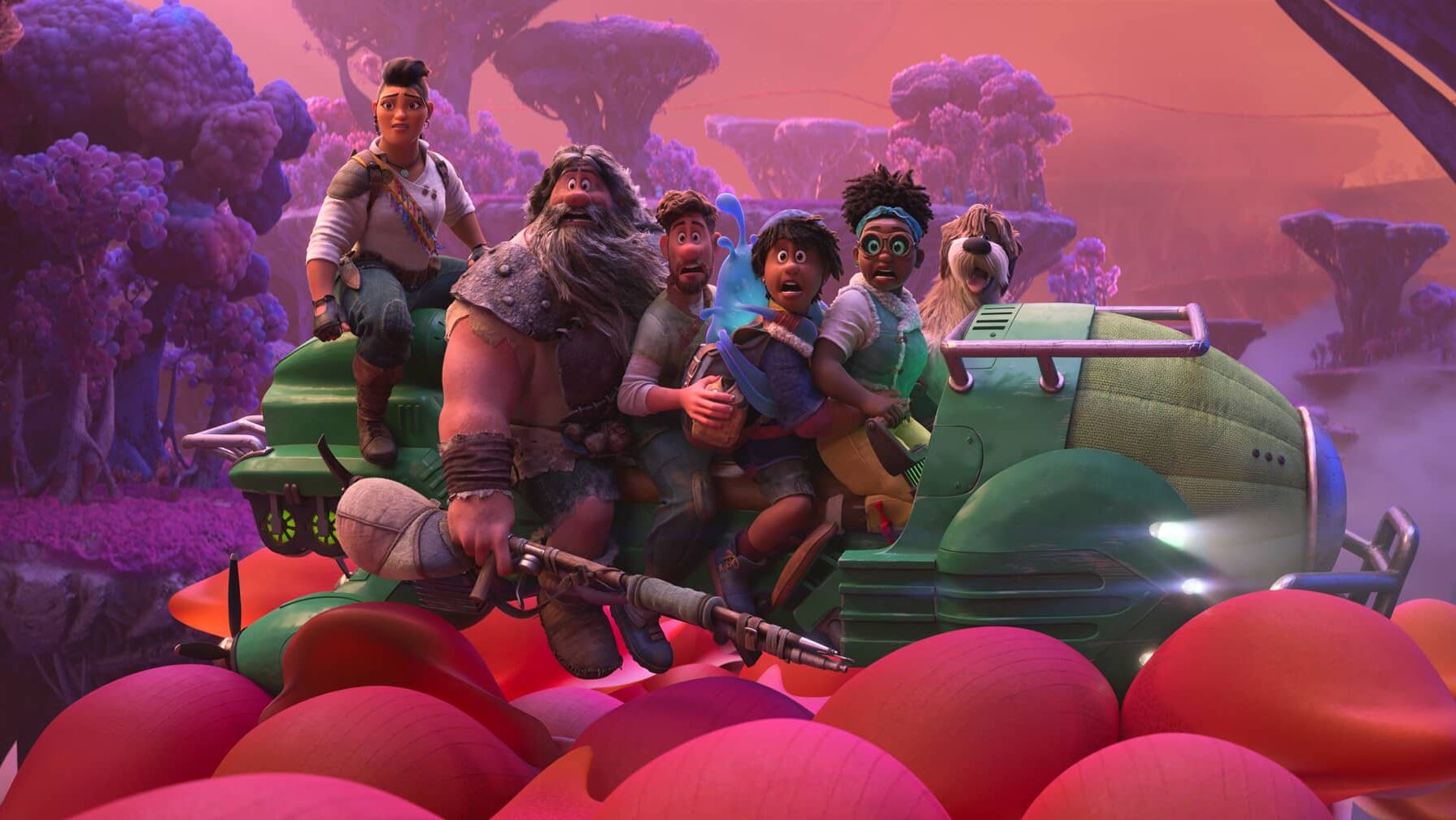 Strange World is a feast for the eyes that teaches lessons about family and the environment through an epic action adventure animated film. While it fumbles a little bit in the beginning, it certainly makes up for it with the final act. There is heart and humor, making it a movie that fans of all ages can and will enjoy.

This movie follows the Clade family – legendary explorer Jaeger Clade (Dennis Quaid), his son Searcher Clade (Jake Gyllenhaal), Searcher's son Ethan Clade (Jaboukie Young-White), and Searcher's pilot wife Meridian Clade (Gabrielle Union). While on a trek through the mountains trying to discover what is on the other side, Searcher discovers a new plant, which he names Pando, that he thinks can help but Jaeger wishes to continue on with his mission.

Jump 25 years in the future and Searcher is a farmer of Pando, which did indeed improve the life of his people Now raising his own son Ethan, it is very clear he wants nothing more than for his son to follow in his footsteps. However, Ethan is nothing like him and has his own hopes and dreams. When something starts killing Pando, the Clades end up on an adventure — think Jules Verne‘s Journey to the Center of the Earth — to try to save it. This is where Ethan and Searcher end up reunited with Jaeger, who they assumed was dead.

Strange World takes heavy inspiration from pulp magazines and films in the look, feel, and sound, but at its core it is a story about fathers and sons, as well as treating the environment with respect. The plot is easily one of the best parts of the film. The writing is brilliant in a way that will certainly teach viewers some important lessons, but they aren't forced down their throats either.

They are hidden within massive action sequences as the Clades battle all sorts of interesting creatures, but also in the softer moments and during family conversations. Splat, who doesn't even talk, has a lot of insight and is the one to teach the most important lessons.

Strange World is absolutely gorgeous to watch. Every single scene seems to up the one before it – with the final shot being truly stunning. This movie deserves to be seen on the biggest screen possible so that every detail can stand out. The visuals are stunning and help to make the film something very special. This world that the Clades discover is filled with many different creatures who are unlike anything we have ever seen before. Each one more exotic and surprising than the next.

As the film goes on there are many times that the Clades are forced to take up arms against these creatures, which provides some epic action sequences.

The First Act Has Issues

The biggest issue with Strange World comes in the first act. While it is easy to become immersed in this film because of its beauty, the first thirty minutes or so moves incredibly quickly. Too quickly in fact. Walt Disney Animation Studios has always kept their films around ninety minutes long. This is greatly appreciated as the common trend now seems to be making movies at least two hours, just to make them long — even when unnecessary.

However, this choice to keep the pace driving forward in a steady way takes away from the start of the movie. There is a lot going on and the cuts and editing, along with the great, but overused, transitions leaves a lot of questions in the minds of the viewers. Strange World does eventually find its footing as it settles into the adventure in the second act.

Strange World is a touching film that sends viewers on a wild adventure into the unknown depths of just that — a strange world. The animation is a feast for the eyes as we are shown things we have never seen before. The environments are stunning, the creatures exotic, and the message about treating the land and plants with love and care is an important one.

On top of that, Strange World has a great voice cast that breathes life into every one of these characters while making them relatable and entertaining. It is easy to root for the Clades, even when they don’t deserve it.

Hopefully, viewers will leave the theater with the inspiration to care for the world we live in because it needs us. If they decide to hug their loved ones a little bit tighter and respect their thoughts and wishes too, then Strange World just might make THIS world a better place.

Have You Been ‘Gaslighted’ at Work? Here Are 4 Ways To Deal

How To Navigate the Fall 2022 Real Estate Market