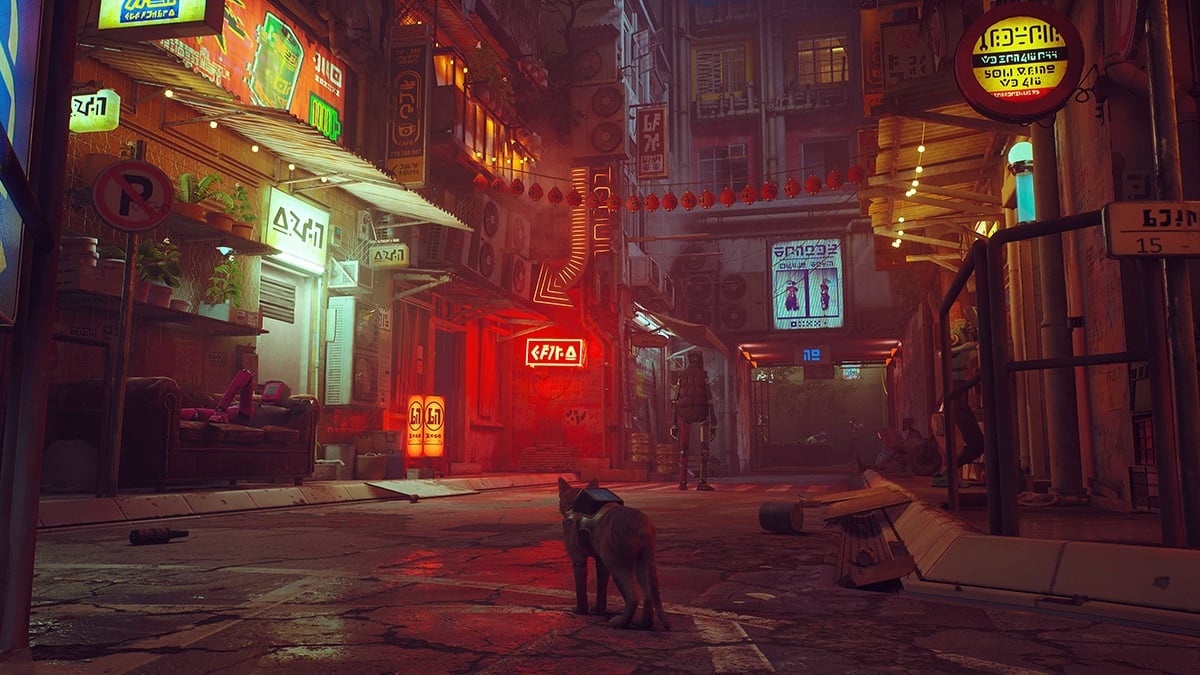 It’s an indisputable fact that the Internet loves cats. They’ve dominated message boards and web videos for as long as we can all remember. So it’s unsurprising that we’d immediately fall in love with a charming video game starring the furry house pet when it cropped up. That’s more or less the reception BlueTwelve Studio’s Stray ran into when it was released July 19.

A feline protagonist isn’t unique in and of itself. Just scan your preferred online video game marketplace, and you’ll find handfuls of titles that let players control one. To my knowledge, none of those games ever encountered the same lasting success as Stray.

That’s because BlueTwelve’s cool cat is more than a mere gimmick. It’s an additional facet to an all-around harmonious game built around sound game design principles and a chilling atmosphere.

Set in a distant dystopian future, Stray is a third-person adventure about a cat that falls into a walled underground city populated by robots. Seeking a way back to the surface, the cat befriends B-12, an artificial intelligence downloaded into a small drone. Together, they navigate the decrepit city and find clues linking events that led to humanity’s subterranean retreat and extinction.

The player controls the aforementioned cat, using appropriate mechanics like jumping, meowing, and scratching as they explore Walled City 99’s neon-lit alleys and rooftops. The cat can also nap to sell the full feline fantasy. The player doesn’t directly control B-12 but can summon them to translate cryptic robot texts and use certain items.

Many of those mechanics are also used to solve puzzles that typically ask players to evade enemies or overcome an obstacle.

BlueTwelve implements several ideas in these puzzles and expands those ideas to ensure Stray remains refreshing and engaging. Most puzzles require players to evade enemies.

One chapter, for example, requires players to stay out of sight of the sentinels, a drone that polices the walled city’s upper level. Later on, players must do this again, but with some deadly obstacles and light platforming thrown into the mix. Sometimes, BlueTwelve even subverts previously established rules, like when players must lure the sentinels into jail cells by getting their attention.

Despite all that, puzzles are never quite challenging, even for novices. They’re also never unrewarding because the developers communicate exceedingly well what they expect from players. They’re never so blunt as to tell players what to do directly.

Instead, they may offer a string of sequentially blinking lights, hinting which way a player may want to go. Those who are stuck can call B-12 to give more explicit direction, although it never felt necessary to do so.

Stray is divided into discrete levels representing different locations within Walled City 99. When humans constructed the underground city, they kept their penchant for social division in mind. Districts were segregated vertically, and the affluent lived high above the less fortunate. After humans died off, their robot companions mimicked this behavior, forcing poorer robots to live in the slums that comprise the bottommost district.

This vertical space works two-fold. First, it’s a motif representing Stray’s central theme of class division. It’s also the type of environment suitable for feline navigation. Players will want to explore levels as they return to the surface, leaping to narrow ledges and wedging themselves through small spaces.

These exploration mechanics aren’t as engaging as BlueTwelve’s puzzles, requiring little strategy and, at most, a single button press. But in these moments, the power fantasy of roleplaying a cat is most apparent.

Exploring Walled City 99 comes with its own rewards, the most tangible of which are collectible medals the cat can wear on its vest. There are also memories B-12 can scan to jog their recollection of the past. However, the actual prize for exploring this world is a remarkable atmosphere.

Besides the most subtle details, players can glean Stray’s narrative from its architecture, mood, and character actions. Decayed buildings bathed in contrasting neon lights highlight an old and neglected world that’s still holding onto a shimmer of hope. Robots in the slums initially run in fear of the cat, thinking they’re one of the evolved parasites that exterminated humans.

Robots in upper districts, however, aren’t so afraid. BlueTwelve’s developers tell much of this story without words, which makes it slightly disappointing when they feel the need to retell it through dialogue. B-12 exists primarily to decode robot language for the cat. Perhaps this detail was best left omitted.

Stray is only about six hours long the first time through. There’s some replayability, but subsequent runs are significantly shorter. PlayStation users with a premium PS Plus subscription can download the game for no additional cost. Everyone else (on PlayStation or PC) can purchase the game for $30 – a steep price for those who like to put a tag on their gaming experience.