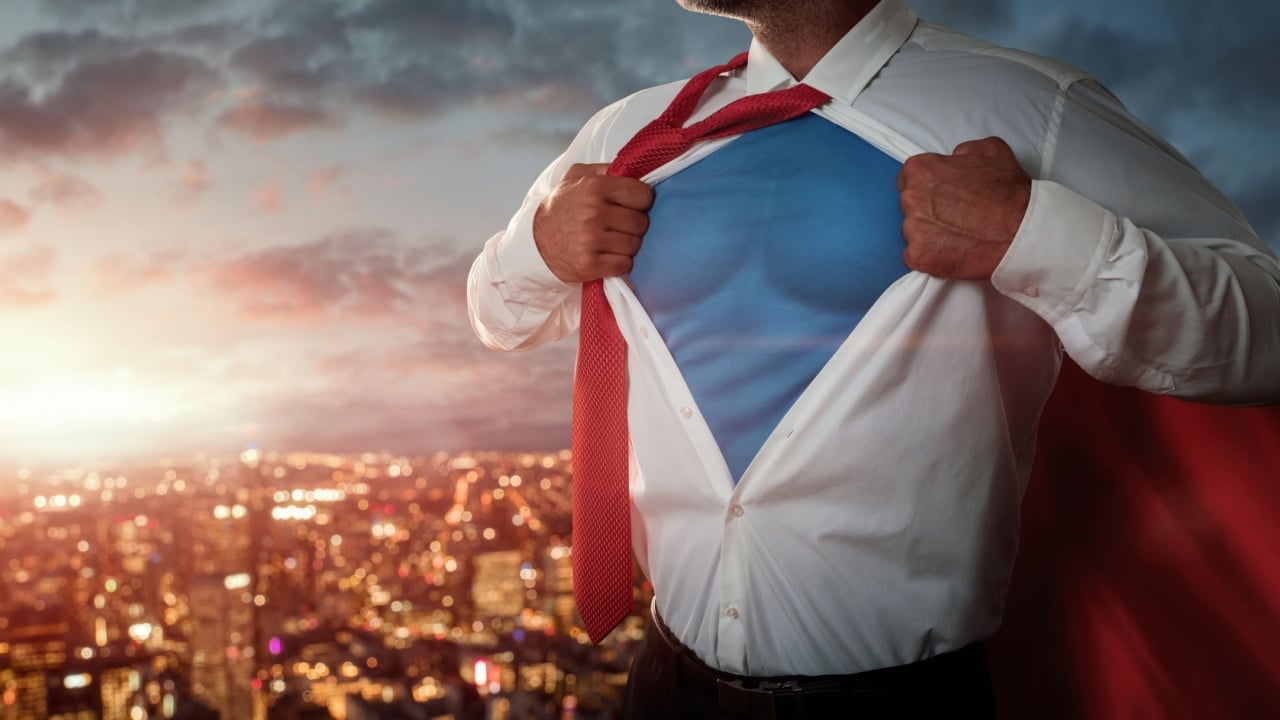 Picture this; it’s 1933, high schoolers Jerry Siegel and Joe Shuster try and fail to create a comic strip with a compelling character. By 1934, their character has undergone multiple evolutions, until finally they settle on a design and story that feels right.

Shuster draws a man wearing his underwear on the outside, much like a circus strongman of old, with an “S” on his chest and a proud smile on his face. Siegel, ever the science fiction enthusiast, writes the story of an alien from a planet beyond our solar system.

Their hero would be stronger than a locomotive, faster than a speeding bullet, and able to leap tall buildings in a single bound. Before they even had the costume or the story, both boys knew the name of this fictional character; Superman.

But what they didn't know, is they had created one of the greatest symbols this planet has ever known.

Superman, the invincible alien whose alter ego was mild-mannered reporter Clark Kent, was created and published by National Allied Publications, a corporate predecessor of DC Comics, and was first seen by the world in the pages of Action Comics #1. Sent from the stars as a child, he was adopted by a human couple and raised to uphold Truth, Justice, and the American way.

It bears mentioning again that both his creators were of Jewish descent, a fact made all the more interesting since the Holocaust began at roughly the same time the character, a power fantasy, and symbol of hope was created.

From his very first day on the job, Superman meant more than just superhero antics and superpowers, and nowhere is that clearer than the role he played throughout World War 2.

In 1941, in Superman Archives Volume 3, Superman is depicted confronting a dictator named “Karl Wolf” at an event that eerily resembled the 1936 Berlin Olympics. Even more interesting is the fact that “Wolf” looked almost exactly like Hitler.

This was the first case of Superman confronting a real-world parallel to an oppressor and embodying the ideal of freedom and equality. This idea of Superman as the inspiration to end tyranny would soon become a vital part of his character and the main reason society simply never got enough of the ‘Man of Steel.'

Who Is the Man of Steel?

It's nearly impossible to nail down a definitive version of Superman. Every generation has its own version, with his own feats and characteristics. As our ideas of tyranny and prejudice evolved, so too did Superman.

In the 1940s, people needed to see Superman confronting Hitler and by 1949 Superman was in school textbooks teaching children about racial equality and fighting the Ku Klux Klan.

Interestingly, it wasn't just his victories that defined him, as seen when Superman clashed with Muhummad Ali in 1978s Superman vs Muhammad Ali where Superman lost a fight to the latter. Whilst this may seem like a basic play to Ali’s celebrity at the time, this loss revealed a brand new, interesting part of the character of Superman; his fights aren't always about winning.

Since his inception, Superman had become increasingly powerful and his powers were all over the place. Whatever the plot required of him, Superman could do it. This created a problem for writers as creating an actual challenge for the character was increasingly becoming impossible.

How do you defeat a guy who can casually toss a planet like a beach ball?

For some reason, after several years, the writers got so lost in the power that Superman wielded that they forgot the true essence of the character. Watching this otherwise god-level character being humbled by the controversial former world heavyweight champion meant a little more than celebrity coasting, it meant Superman needed to be fallible again.

Whilst it may not be this story in particular that established this turn in the character (plenty of obscenely overpowered feats followed this), this was definitely a solid step toward building a better, more relatable Superman. Less than 20 years later, this concept came to its natural peak. Superman died.

Death of a Hero, Birth of a Man.

The publication of 1992’s “Death of Superman” shook the entire planet. Here was this nigh invincible being we had all grown to associate with all that was good and right in the world, dead in the arms of the people he loved. There were no technicalities or weaknesses employed, unlike in previous defeats where the infamous fictional element Kryptonite was used. No, here Superman fought his equal and won, but at the cost of his own life.

Being a crimefighter is one thing, but being willing to die in the defense of the defenseless, that's beyond crime, that is heroism. The world bore witness as people in both parts of Superman’s life mourned him. What had seemed like a simple story of a guy who liked to wear spandex once in a while and chuck galaxies around, had evolved into a deep exploration of tragedy, loss, and vulnerability.

Superman didn't just represent an ideal anymore, he represented us. The “man” in Superman became the defining feature of this superhero and the journey from comic strip to eternal symbol was complete. From that point on, Superman wouldn’t just stand against oppression, tyranny, and pain, he would experience it.

By the 2000s the world had undergone a massive change. With the Internet came better news distribution and with that came news of terror attacks, disease, war, famine, and all manner of pain from around the world.

As a planet, we began, for the first time, to truly see each other’s pain and understand just how vulnerable we really are and how responsible we truly are for each other. Conflicts escalated, the boom of the mid to late 20th century was coming to a close and we finally started considering our mental health as a priority.

The versions of Superman that followed were a bit sporadic. A new age had begun and after a few Crises (DC comics’ version of a soft reboot), we found ourselves with a Superman who showed real human emotion and weakness. His villains didn't have to be as strong as him or even smarter than him, they simply had to be, like him, victims of the human condition.

Gone were the crazy powers and insane feats of strength, away with the focus on who punches harder. Enter a Superman who now fought self-doubt, sadness, loss, and emotional turmoil. This Superman went on to do something that finally merged the “Super” with the “man” in an irrevocable and absolute way. In Superman #18, he got rid of his secret identity and told the world Clark Kent and Superman are one and the same. This move finally gave way to the Superman the people of today needed more than anything.

Throughout the 2000s, there were endless stories depicting Clark Kent as a father and showing him struggle with responsibility. Soon, one version of his son, Jon Kent, would solidify as the definitive son of Superman. In 2021, after nearly a century, the mantle of Superman was passed on to Jon and he became the Superman of today. But what does that mean?

According to comics, Jon Kent was raised by his father, Superman, and his mother, long-time love interest, turned wife, Lois Lane. By the time he was 10 he was quite active in the superhero community, but was struggling with power fluctuations and getting out of his father’s shadow. At a certain point, his grandfather appeared and took him on a Rick and Morty-esque adventure through the cosmos which saw Jon end up lost in an alternate universe with a brutally abusive and unstable version of his father known as Ultraman.

To add on to all this, even though he spent seven years in the clutches of his father’s abusive doppelgänger, when he returned to his home reality, Jon seemed to everyone there to have only been gone for three weeks! Feeling out of place, he was ferried off to the future where he attended a “University” of sorts and returned just in time to bid his father farewell as Clark had to fly off with a new team to save a slave planet, Leaving Jon as the new Superman.

Let's take stock here; this new Superman is a second-generation immigrant and victim of abuse who was forced to grow up too early and struggles to escape the shadow of those who came before him. A few months later, in his own comic series titled Superman: Son of Kal El, Jon came out as bisexual and went on to begin a romantic relationship with Jay Nakamura, an immigrant activist reporter.

If all this doesn't scream “Superman of Today” then what does? In a world where minorities are still fighting for their rights, immigration is still a hot topic and mental health and abuse are finally getting the attention and treatment they need, what's better than a Superman who has experienced all of this?

A Superman who joins protests against unfair laws, one who lets himself be arrested alongside his fellow protestors and, in spite of being nearly as powerful as his father, refuses to punch his way out of every problem. Not to be outdone, Clark Kent Superman (Superman Sr?) has allied himself with a powerful team consisting of almost exclusively LGBTQIA+ community members, in a team called “The Authority”.

In the last century, Superman has been a cornerstone of pop culture. One that has helped us navigate our complex relationship with humanity, power and oppression. The “S” Symbol on Superman’s chest has gone from symbolizing power to giving even the coldest of hearts a small slice of idealistic hope.

Today, Jon Kent’s Superman continues this tradition by forcing us to contend with modern prejudice. Superman now shines a light on things society has attempted to bury for ages. This is no small task, the weight of these issues is immense and the amount of pressure that comes with embodying such hot button issues is beyond imagination. So yes, it absolutely sounds like a job for Superman.

Takunda Aaron Chimutashu aka Zen the Master is a Film Director, Writer, Photographer, and Pan African with a background in Engineering, Entrepreneurship, and Social leadership. He is currently working as the co-founder, COO, and resident Film Director of award-winning production house Visual Sensations Media. As a self-titled “Universal Creative” Zen loves to explore art in all its forms and seeks to investigate all the amazing ways art can influence and inspire our society for the better.

What Are Consumers Cutting Down on to Combat Inflation?