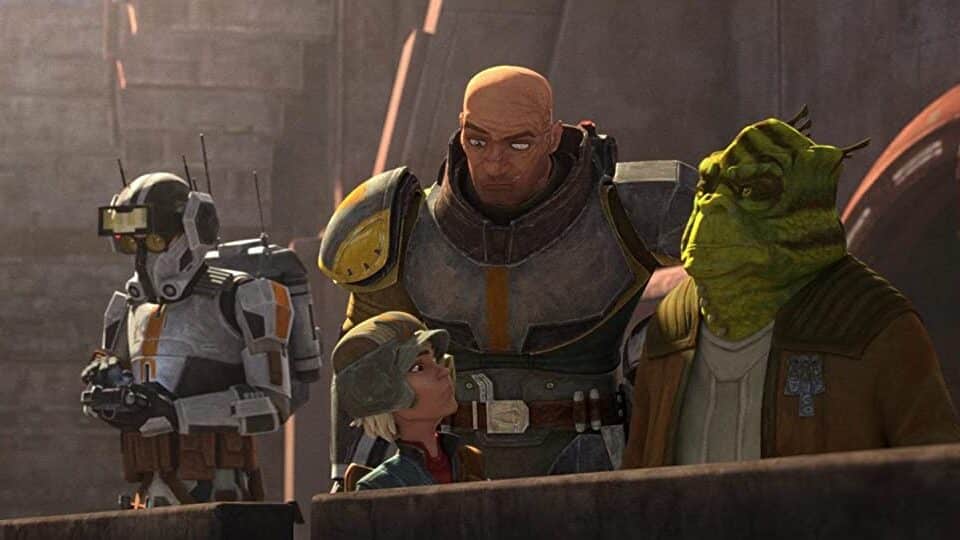 Star Wars: The Bad Batch season 2 has started off strong, giving fans a high-stakes opening two episodes, a look at Crosshair, and a filler episode that delivered the laughs.

This episode starts off in a junkyard, with Omega and Wrecker exploring and looking for a spare compressor for the ship. While Wrecker finds the compressor that they need, Omega discovers a few other goodies.

Back at Cid’s, Phee is telling a story about her adventures to some of Cid’s patrons. Tech points out to Hunter and Echo that it changes every time she tells it. In come Wrecker and Omega with the compressor and other items that Omega brought back. Phee takes a look and discovers something special among Omega’s ‘treasures.'

There are coordinate markings on one of the pieces and she shows it to a droid. It turns out it is a compass, from long before their time. The coordinates are in the Kaldar Trinary System, one that Tech says he has never heard of. But Phee is certain there is treasure to be found there. She tells Omega that she has quite the eye, before they head off to investigate.

On the ship on the way there, Phee tells story after story, and it is clear the rest of Clone Force 99 is sick of hearing her speak. When they get there, the planet is very much inhabitable and seems to be deserted. The compass activates instantly, and they start tracking it on their hunt.

The compass leads them to a pile of rocks, which ends up being a secret entrance to a cave. The gang had thought the planet was completely devoid of life, but as they enter the door, a creature looks at them from up high.

Inside the cave, Tech says that the markings on the walls seem to be a thousand years old and Phee adds that they are older than that, much older. She claims they are standing in the entranceway to Skara Nal, a place of legend that every pirate in the galaxy has heard of. They need to arrange the symbols to find the next door but when they do, they trip a booby trap.

Phee tells the clones to relax and that there is always a way out. It doesn’t take long for Omega to find new symbols by looking through the compass.

As they venture further into the cave, the animal that watched them enter it surprises them and attacks. It is a massive creature and they all need to fight it off, but in doing so, it causes the ceiling to cave in. Echo, Tech, and Wrecker are separated from the rest of the group.

Tech says that he can track their position and will work on finding a path that allows them to meet up with them. Phee explains that the rest of them will continue to look for the treasure. They come across another puzzle and Omega realizes that they need to find a way to walk across the ceiling. The compass fits into a hole in the wall which rotates the ceiling so that it is now the floor.

The others find them, reuniting just in time to open the final door that is standing in the way between them and the treasure. The Heart of the Mountain is in the room, which is purple and sparkly. When Phee removes it from its stand however, everything starts crumbling – think Indiana Jones movie style.

It seems they activated a giant metal robot, which they are now traveling inside. It is apparently a weapon of sorts and it emits a giant beam of energy. Tech suggests they put the treasure back in its spot in order to stop the destruction. Phee doesn’t want to do it, but reluctantly agrees.

The creature that attacked them earlier returns and causes them to drop the Heart of the Mountain. The clones battle the monster while Phee goes after the stone. It doesn’t take long for it to be in hand and put back into its slot, where it promptly melts. The giant metal weapon destroys itself and crashes to the ground. The clones and Phee are uninjured and leave the planet. They might not have a treasure, but at least they have an adventure to talk about.

Star Wars: The Bad Batch season 2 episode 5 feels like another filler episode, as it tells a complete, stand-alone story. However, it is fun to see Phee and the clones interact for longer than a minute, and also for Omega to get to be a kid and an explorer. It was clear that she was having a lot of fun hunting down treasure with Phee – even if they ended up with nothing to show for it.

New episodes of Star Wars: The Bad Batch drop every Wednesday only on Disney+.

12 Popular Songs That Hit Differently After Reading The Lyrics