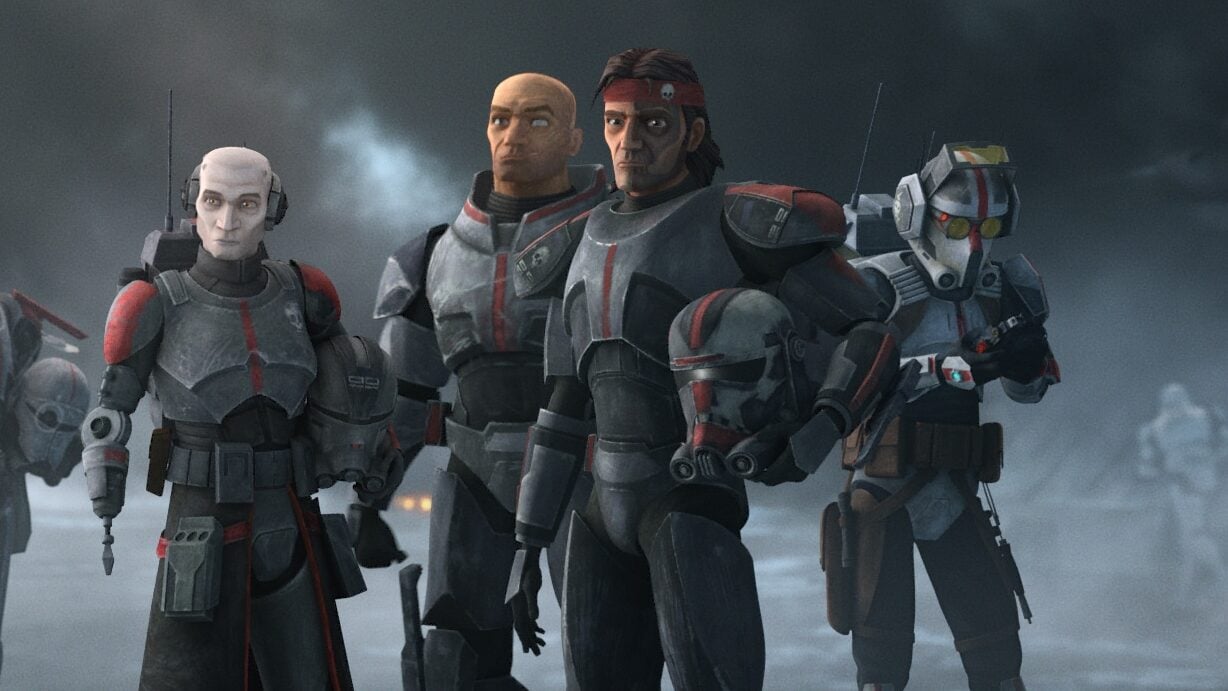 After taking a step away from Clone Force 99 to check in on Crosshair, Star Wars: The Bad Batch season 2 reunites fans with Wrecker, Hunter, Omega, and Tech – even if it is for a bit of a filler episode. That being said, The Bad Batch Season 2 Episode 4 is a whole lot of fun as it focuses on racing.

We start off at Cid’s where she has another job for Omega, Wrecker, and Tech. She tells them that they will be her security crew, but doesn’t offer up any more details as they head for the shuttle. They arrive on a planet called Safa Toma, where she said it can be a little rough around the edges there. She needs the added security just in case things get dicey.

The four of them end up on a track, where Cid explains to them that they are watching riot racing. There are ships racing, while shooting at each other – it appears that anything goes on the track in riot racing. Cid manages a droid racer named TAY-O, voiced by Ben Schwartz. Of course this is an immediate hint that this droid will be sassy and hilarious, because Schwartz is one of the best comedic actors working today. And if you assumed that, you would be right.

The racing droid almost instantly goes toe to toe with Tech, verbally that is. The exchange is hilarious. Later, Tech points out that the ship the droid is using in the races wasn’t built for speed, to which he replies that is why it is modified.

It doesn’t take long before a manager and his racing team show up, clearly having a bone to pick with Cid. Millegi is his name and he notices the clones and droid immediately. He asks if she thinks her droid can beat his champ Jet Venim and offers a side wager. He chuckles as he walks away saying it is just like old times.

Cut to the race, and Jet Venim and TAY-O are in the lead. Tech says it is impossible to predict who would win. As the race continues, Mellegi instructs his team to get TAY-O with ‘the crunch' – a claw grabs his ship, causing him to tumble. Jet Venim wins.

Cid, Tech, Wrecker, and Omega are picking up the pieces of the crash. They find parts of TAY-O and Omega suggests they might be able to put him back together. When Melligo comes to collect his credits and Cid tells him she is good for it, he states that she has run out of time.

Wrecker and Tech ready their hands at their weapons, but before a fight breaks out Omega offers up a solution. One more race, double or nothing. If they win, they get Cid, but if he wins, they will pay him double. Millegi jumps right on the offer, seeing the state that Cid’s droid and ship are in. He keeps Cid as collateral.

Tech gets to work repairing TAY-O, who is cracking jokes at him and asking if he needs help the entire time. Wrecker says that he just wants to go take Millegi out, but Tech puts his foot down, explaining that they cannot use military tactics for this situation, no matter how badly they want to. Millegi is dangerous and connected, and it would come back to bite them if they do that.

Back at the track, Millegi pours Cid a drink and offers a toast to old times. She says she has changed but he says that hustlers like them never change.

Before the race starts, TAY-O and Tech are talking. Tech says that he is analyzing the track layout, and TAY-O tells him that they will never win that way. He says that you need to be able to do what is necessary when in the field, right before he gets hit by a ship. Millegi walks by saying it is a dangerous place, and it is clear he planned for this to happen.

With TAY-O unable to race, Tech decides to take his place. From this very moment, it is obvious what is going to happen. During the first race Cid warned TAY-O not to take the left tunnel because it is a death trap. As Tech approaches the tunnels, he has Omega send him the schematics of the left one.

Realizing that he needs more speed, he wizzes through the pit and drops all of his weapons so that his ship is lighter. Tech is still in last place but then he and Omega learn that the last part of the track is missing through the left tunnel, and that is why the racers avoid it. However, it is also the shortest tunnel, so Tech decides to take it. He makes it through and ends up winning the race. Millegi says that a deal is a deal, and lets them go. Before Omega, Tech, and Wrecker leave though, he tells them that their loyalty is admirable, but to watch their backs as it doesn’t always go both ways with Cid.

Star Wars: The Bad Batch season 2 episode 4 is definitely what you would consider a filler episode, but that doesn’t mean it isn’t enjoyable. Ben Schwartz brings the humor and fun while things are switched up just a little bit, and we are given some racing sequences, as well as a bit of a deeper look at Cid. While the outcome is predictable, we are thinking it will set up for something with her down the line.