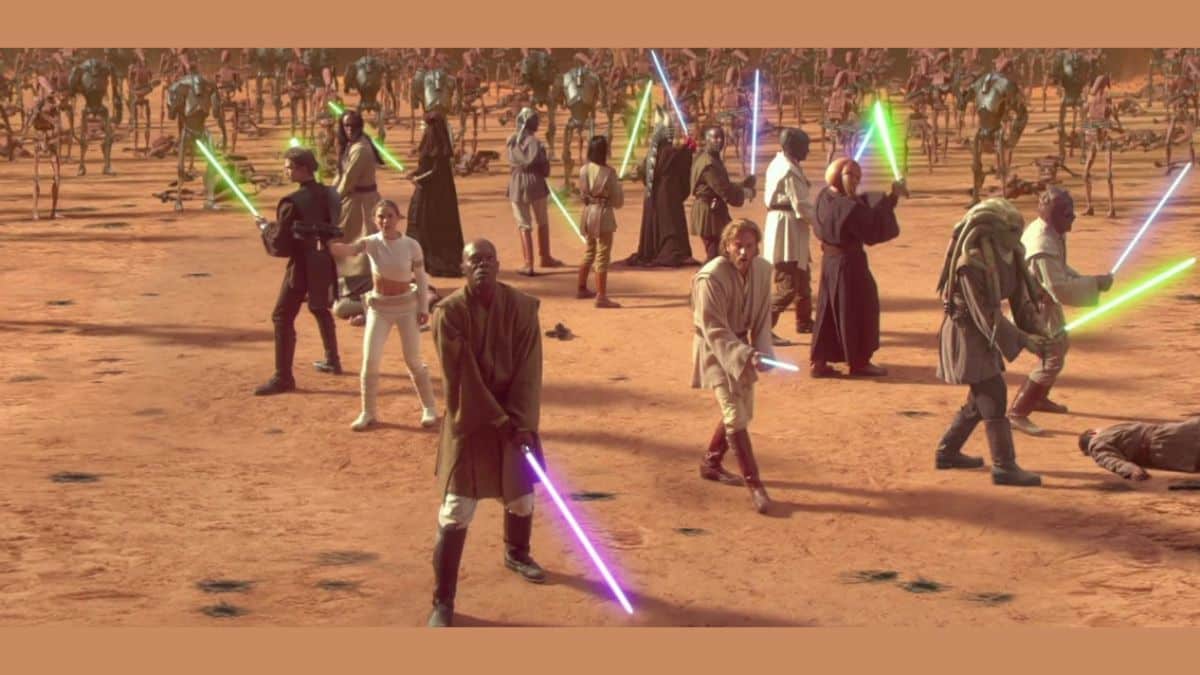 What Is the Star Wars Movie's Chronological Order?

With all the Star Wars films coming out these days, you could be forgiven for not keeping track of their chronological order.

Where does the ‘Solo' film fit in, for example? Does it come before Rogue One? And that's a fair question for the casual viewer who hasn't seen either of those films.

Not to mention The Mandalorian, The Book of Boba Fett (with its post-Jedi flashbacks), The Acolyte (set 100 years before TPM), Andor, and Rangers of the New Republic! So, here's the list of every single Star Wars film and Disney Plus show in chronological/narrative order.

We are even going to include the Ewok side story adventures because we just loved Caravan of Courage as a kid… (hey, why is it not on Disney Plus!!) 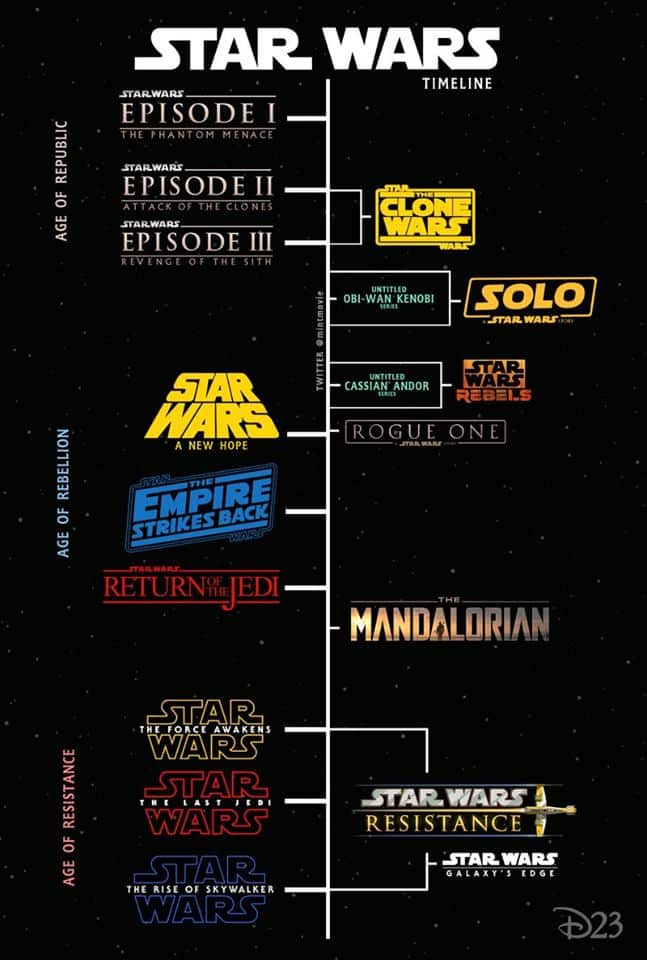 The one where a young Obi-Wan Kenobi and Qui-gon Jinn escape a hostile blockade to find allies and come across a young boy who turns about to be the Chosen One.

Fun Fact: “Phantom Menace” was the name of a villain in the “Flash Gordon” comics. This shouldn't surprise many people as George Lucas has often cited Flash Gordon as one of his inspirations for making the original Star Wars.

The one where Anakin Skywalker shares a forbidden romance with PadmÃ© Amidala, while Obi-Wan Kenobi investigates an assassination attempt on the senator, which then leads to an attack of Clones.

Fun Fact: When Anakin is slaughtering the Tusken Raiders in Attack of the Clones, Qui-Gon Jinn's voice can be heard in the background yelling, “Anakin! Anakin!”.

This is no accident, as Qui-Gon Jinn's Force-Ghost was trying to stop Anakin's rage but clearly failed. Qui-Gon also urged Rey to rise up at the end of The Rise of Skywalker.

The one where after the Republic's victory on Christophsis, Anakin and his new apprentice Ashoka Tano must rescue the kidnapped son of Jabba the Hutt.

It was the first official Star Wars cartoon movie released in theatres.

The Clone Wars television show fits in between these two films and ties in neatly to the beginning of the Revenge of the Sith timeline, with some events in the final season happening on the same days as key moments in the film.

The one where Anakin and Obi-Wan rescue Palpatine from Count Dooku. Anakin is lured into a sinister plan to rule the galaxy by Palpatine, succumbs, and becomes Darth Vader.

Fun Fact: The Millennium Falcon is spied landing on Coruscant in Revenge of the Sith. This was prior to Lando or Han Solo owning it!

The Bad Batch also flits around this timeline as well.

In the second of the Anthology series, the young Han Solo meets his future co-pilot Chewbacca (and learns his family name) and encounters Lando Calrissian years before joining the Rebellion. It Marks a Star Wars first where the original actor, Harrison Ford was replaced by Alden Ehrenreich as Solo.

Fun Fact: This was the first Star Wars movie to not mention the word ‘Jedi'.

The first Anthology film,Â  Jyn, finds her caught up with the Rebel Alliance in a risky move to steal the Death Star plans in a desperate attempt to prevent the Empire from taking over the universe.

The timing between these two films in terms of ‘film time' appears to be a few hours,

The one where Luke Skywalker joins forces with an old Jedi Knight, a cocky pilot who likes to shoot first, a Walking Carpet, and two droids to save the galaxy from the Empire's world-destroying battle station, while also attempting to rescue Princess Leia from the mysterious Darth Vader.

A TV movie featuring the original ANH cast getting up to some wild antics. The one where it's so bad, it's so bad, yet still technically Star Wars canon. One for trivia enthusiasts only…

Fun Fact: Chewbacca's father is named Attichitcuk and his wife is called Mallatobuck. The name Attichitcuk was referred to in the Solo film. His son Lumpy's proper name is Lumpawarrump.

The one where Luke meets Yoda and his father.

Fun Fact: The classic “The first transport is away!” quote was delivered by Mark Hamill.

The one where Wicket and his friends agree to help two shipwrecked human children, Mace and Cindel, on a quest to find their parents. They have to rescue them from the hungryÂ Gorax: 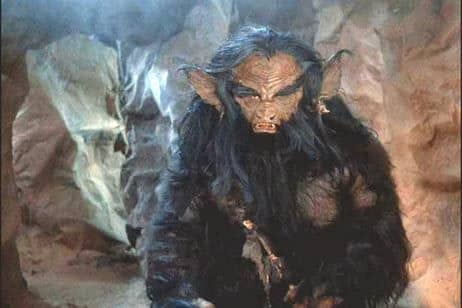 The one where Marauders raid the Ewok village and steal a power supply they believe to be magical. It kinda goes off-piste and there's a wicked witch involved.

Fun Fact: The witch Charal is a Nightsister. The third season of the Clone Wars introduced them as Sith Witches from the planet Dathomir.

The one where Princess Leia walks around in a golden bikini and there's a second Death Star.

Fun Fact: David Lynch was originally offered the chance to direct this episode of the series. He turned it down because he believed it was “Lucas' thing.” He went on to direct the Dune movie instead. It's fascinating how much Frank Herbert's book influenced the original Star Wars script development.

We will sneak in here that The Mandalorian Disney Plus show is set 5 years after ROTJ. The Book of Boba Fett is set in the same time frame. Rangers of the New Republic will also play in this time-space.

We are not sure where Ashoka fits in at this time.

The one where Thirty years after the Empire's defeat, the First Order appears to be looking for Luke. Rey is introduced as the yin to Kylo Ren's yang.

Fun Fact: The Starkiller base name was inspired by that word being the original last name of Luke Skywalker as found in Lucas's original scripting.

The one where Luke decides who is really the last Jedi.

Fun Fact: When Luke raps Rey over the knuckles with the plant, that's a call back to when Yoda trained Luke in Empire.

The one where Rey decided who is really the last Jedi.

We've covered the time sequence order of the movies but there's always going to be some conjecture about what order actually watch the movies.

We say watch all of them as you wish, others say the Machete Order is the best way to watch the films.

There has been no word on when the Rian Johnson trilogy will be set (we suspect this trilogy has been quietly canned by Lucasfilm). We suspect it will be very tangential to the Skywalker saga whenever it is set. We also now know that the film by guys that did Game of Thrones have left their deal with Lucasfilm and moved on to something with Netflix.

The Obi-Wan Kenobi mini-series is moving along into production – it will naturally be set before Rogue One / ANH.

Rogue Squadron is the new stand-alone Star Wars film directed by Patty Jenkins. It has been hinted at but not yet clearly stated that this film will be set POST the events of The Rise of Skywalker.

As for The Acolyte, or the Lando Calrissian show, we have no idea where those shows fit in.

Andor Episode 6 Is the Best One Yet

How To Handle Climbing Mortgage Payments as Rates Pass 6%