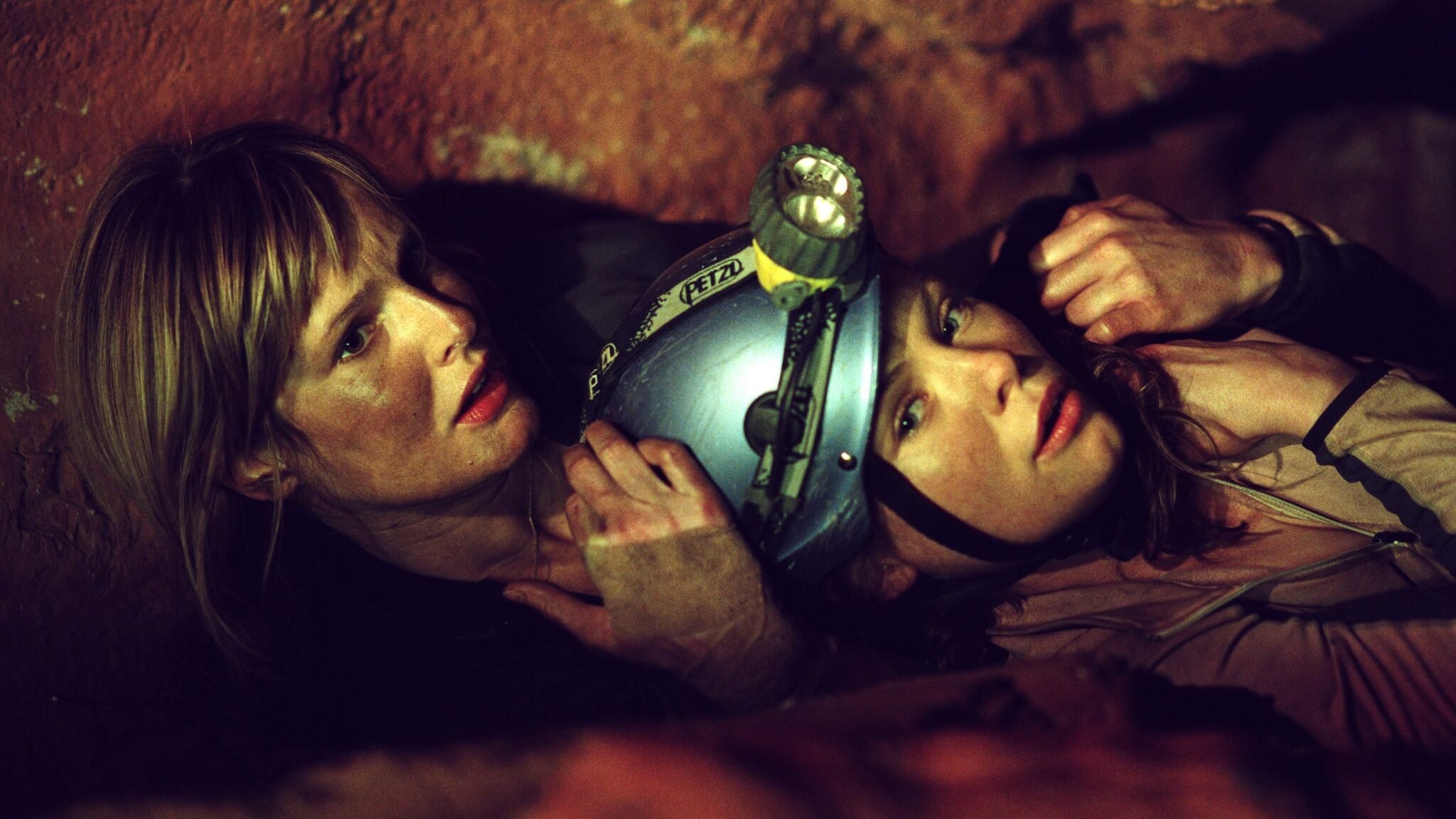 The Descent can be accurately summed up in just one sentence: a claustrophobe’s absolute worst nightmare. If the tight confines of underground caves weren’t enough of a horror movie for you, there’s also the imminent threat of blind, man-eating underground creatures that use sound to hunt and that have multiplied to impossibly large numbers inside the caves, as well as internal threats from people you thought you were your best friends, but are actually selfish turds who stabbed you in the back in more ways than one.

Either way, there’s bound to be something for everyone when it comes to The Descent — if you’re not scared by the idea of getting lost in a pitch-black cave or facing carnivorous monsters, then the movie’s action might appeal to you. If you’re looking for a plot twist-heavy exploration of friends continuously betraying each other in increasingly worse ways, then there’s definitely something for you here too.

The Descent is one of those movies that feels somewhat choppy and anecdotal, but that really pulls through in the final act, stringing all of its loose elements together and creating a tense story not just about killer underground monsters, but also about trust and friendship and the lengths we’ll go to in order to survive against insurmountable odds.

Among the intrepid adventures in the almost exclusively female cast (uniquely, there’s only one male character that appears in a very minor role in the whole movie) is Sarah (Shauna Macdonald), a woman who is coping with the loss of her husband and young daughter after she and her family are involved in a horrific car accident.

Trying to distract Sarah from her grief and mounting depression, some of her closest friends suggest she travel with them on one of their adventures to North Carolina where they plan on venturing into an underground cave system.

This is no regular group of friends — instead of eating pizza and hanging out at bars for Happy Hour on Friday, these kick-ass ladies go free solo rock-climbing and whitewater-rafting and cave-diving in their spare time.

Not long after they head underground, however, the group begins experiencing some huge setbacks that prevent them from leaving. For starters, the main organizer for the ladies’ trip, Sarah’s best friend Juno (Natalie Mendoza), has led the group to a completely unmapped area of the cave, meaning that when they get lost — which, no surprise, ends up happening — they’re well and truly lost.

The Depths of Fear

Truthfully, this would’ve been a scary enough notion by itself: being stuck underground, with limited food, water, and light, in a cave system characterized by tight passageways, abrupt cave-ins, and dangerous drop-offs, where your next step could plunge you twenty feet into complete darkness with a shattered bone.

But then the movie ups the ante and introduces its race of subterranean mutant-creatures: monsters that the movie hints were once human beings that have lived so long in the caves that they have (d)evolved into a more primal state to better suit their new living conditions, and that begin hunting the movie’s protagonists down one by one.

Imagine something like Aliens set underground, and you can come somewhat close to imagining the plot of The Descent. It’s a first-rate survival story that brilliantly uses its limited yet expansive setting to build a claustrophobic atmosphere so damn palpable you find yourself practically hyperventilating when passages get too tight or a character’s flashlight battery begins flickering out.

It’s a movie that’s also complimented by some fantastic action scenes and some top-notch performances from the principal cast involved – all of whom are fairly lesser-known. This provides some slight believability when it comes to who might be killed off next. If it was a movie starring Angelina Jolie or Sigourney Weaver, we’d probably just assume their characters were safe till the very end.

But more than that, what sets The Descent apart from your basic trapped-in-one-place-with-dangerous-monsters-that-want-to-eat-me-alive horror movies is the more subtle human story the film builds around Sarah, as well as her relationship to her friends. I’ll avoid spoilers here, but needless to say that, much as in real life, unfortunately, we can’t always trust the people closest to us.

Some of our closest friends might secretly be screwing us right under our noses is an undeniable nightmare that haunts the back of our minds in any friendship. As most horror fans can probably attest, it’s really hard to make a horror movie where the film hooks us from both a surface level and a more emotional standpoint, but The Descent does just that, making us bond with the characters, empathize with them, and ultimately grieve for them when they are killed and eaten.

Ratcheting up the Tension

There are quite a few other elements that make The Descent stand out and help it transcend the usual campiness or cliches you’d expect to find in a movie of this caliber.

Refreshingly, all of the characters 1) are fully formed and three-dimensional, 2) possess basic human intelligence, and 3) are actual fighters, which is definitely more than be said for most of the other airheaded, clumsy stereotypes who populate almost 90% of horror movies out there.

Watching characters whose actions we don’t understand, prevents us from feeling any similarities to or a deeper connection. They're obviously just stereotypical horror movie characters.

Throughout the movie’s first act, we see these ladies interacting with one another, growing closer, having fun, and even saving and supporting one another when in tough situations. For example, getting pinned in a very narrow passage and almost having a panic attack, before the soothing voice of your friend reminds you to calm down and breathe.

Because of this, we not only see the bond among these ladies—we begin to feel a part of the group ourselves, laughing when they laugh, sighing in relief when they sigh in relief, and getting noticeably pissed whenever freaking Juno does something wrong (which, spoiler alert, happens a lot).

As mentioned above, the movie also does a great job playing to the strengths of its unique, limited setting: a lesser movie would’ve just had the characters stumble upon the creatures and fight them, but this movie actually illustrates just how claustrophobic the group’s situation is, showing them fighting monsters in a large area of the cave one moment, then running smack dab into a passageway that dead-ends in the next.

It adds a fantastic layer of authenticity and unpredictability in regards to not just the movie’s setting, but to the characters’ well-being as a result: “Is she going to make it out of this passage, or is she trapped in here with them?”

Something positive could also be said for the lack of exploration in regards to the movie’s antagonists — the nameless, featureless, mole-like creatures that haunt The Descent’s endless cave system. Too often we see horror movies that go out of the way to provide unnecessary backstory about a villain or enemy. Sorry, Ridley Scott, we don’t need to know the planet the alien from Alien comes from. Or why Predator is hunting people; in fact, it’s a lot scarier when we don’t know why they’re hunting people one by one.

Luckily, The Descent avoids this pitfall, providing practically no background information about what the creatures are or how long they've been down there. The movie sort of hints that they were once humans who have adapted to the dark atmosphere of the caves, but nothing’s concrete. This results in creatures that feel mysterious, but still threatening.

When The Descent was released, it earned very high marks from critics and horror fans alike. And it continues to do reasonably well within the horror community. However, strangely enough, it’s failed to achieve that coveted cult movie status, nor does it have a hardcore community of fans supporting it.

I can’t say for certain whether The Descent will one day become a cult classic among future horror audiences. Although I can’t think of many movies more deserving of that title than this one.

The Descent is currently streaming on Prime Video's ad-supported freevee.

Top 10 Star Wars Moments that Made Us Cry