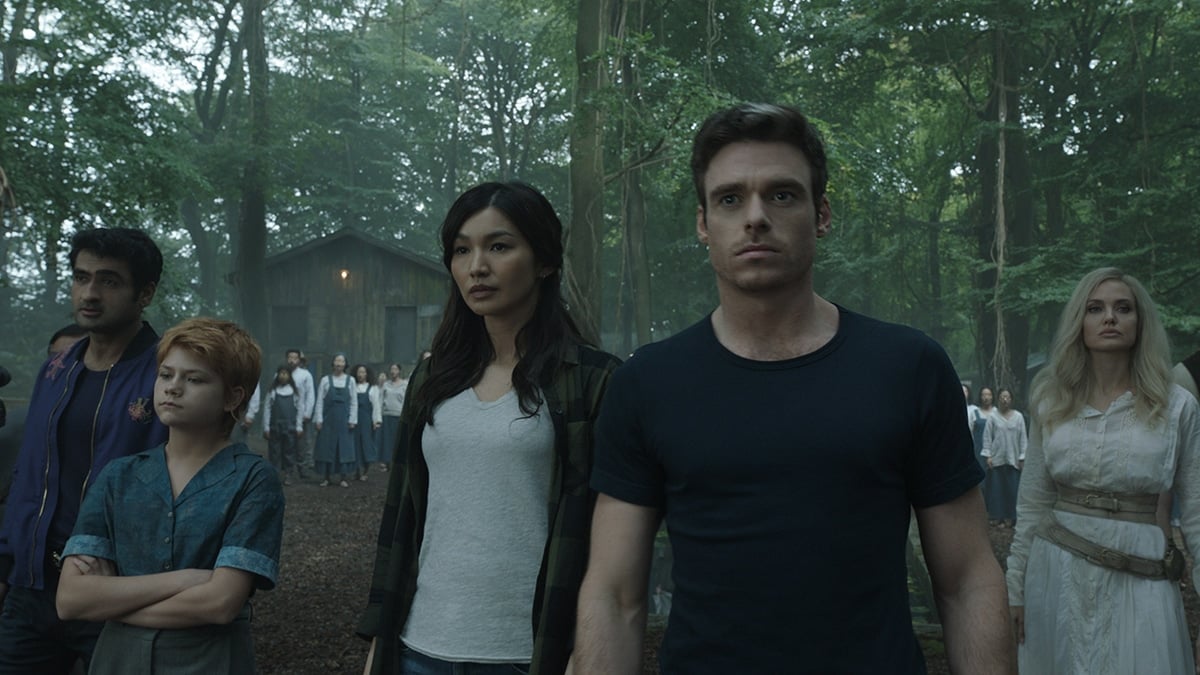 You probably came out of Eternals and had plenty of actors you wanted to know more about and if one of them was Richard Madden then you're in the right place. The actor who brought Ikaris to life in the movie has had an expansive career which includes hit television shows, critically acclaimed movies, and more!

So come with us throughout some of Madden's best work and see which of his movies or television shows might be the next adventure for you to go on after seeing that blue-eyed man with the gray streak fall in love with Gemma Chan's Sersei in Chloé Zhao‘s Eternals.

Full disclosure, Game of Thrones is where I was first introduced to Richard Madden because he played my favorite character on the show, and to this day, I still want justice for Robb Stark. The eldest son of Ned and Catelyn Stark, Robb was (as the show points out) the King of the North. And honestly, Richard Madden is so good in this show that you're willing to support Robb even though his fate is one of the more popular spoilers out there about the show!

Now, if you want to have a fun time, I don't think that you'll want to dive right in on Game of Thrones because the show, famously, kills its characters off and it hurts. But getting to see Richard Madden as young Robb Stark is a delight and why not commit to a show that truly polarized its fans? Do it for Richard Madden but also bring some tissues.

David Budd is a war veteran who finds work with the Metropolitan Police Service in London, in the Royalty and Specialist Protection branch, Budd is assigned to protect polarizing political figure Rt Hon Julia Montague MP. Basically, think of all the fanfic you've read of a hot bodyguard falling in love with the person they've sworn to protect and if you like that then you'll like the thriller series Bodyguard.

For fans who weren't into Game of Thrones, they probably came to Richard Madden as David Budd because it was a Netflix series here in the United States. (So yes, your mother probably suggested this to you at some point if you didn't watch it yourself.) Again, it is completely different from the rest of Madden's work but clearly shows his talent and ability to play a wide range of colors and Bodyguard is a great addition to his filmography for fans!

Maybe you're in the mood for a light-hearted film about a DJ falling in love with Gillian Jacobs. If that's the case, can I suggest Ibiza? A movie that I would describe as “vibes only”? Truly a wild romantic comedy that is just filled with hilarious comedic performances as well as Richard Madden looking maybe his best, the movie is nothing like we've seen before from Richard Madden. I'm blaming the white t-shirt look.

But can you expect anything else from him? He's mastered the art of bringing new life to each character that he plays. Playing Leo West, he meets Harper (Jacobs) when she's trying to just let loose on a business trip and it turns into a whirlwind romance that leaves us, as the audience, rooting for Leo and Harper. But really, when are we not rooting for a fun DJ played by Richard Madden in a white t-shirt to fall in love?

The movie that should have been nominated for Oscars (and Richard Madden for Best Supporting Actor) was the 2019 film Rocketman directed by Dexter Fletcher. Starring Taron Egerton as Elton John, Jamie Bell as Bernie Taupin, and Madden as John Reid, the film is a look at the rise to fame that Elton John had from the 60s and on. And you might want to prepare yourself for Madden singing “Honky Cat” because it will make you scream.

Now Madden is, essentially, a villain in this movie if you know anything about John Reid and Elton John's relationship with each other but it is still a wonderful role for Richard Madden and it should have gotten him more recognition. Hopefully, this won't be the last time we hear him sing either because, as I said, “Honky Cat” is incredibly fun and anything that gets Richard Madden in these fun suits is a plus.

The live-action Disney films remaking their classics have been pretty hit or miss but the start, which featured Richard Madden, seemed promising. Cinderella, directed by Kenneth Branagh, was a beautiful look into the fairytale of Cinderella (Lily James) and the quest to find her Prince Charming (Richard Madden). It's not a musical and it isn't a carbon copy of the animated film of the same name but the movie does the impossible: It made me like the story of Cinderella.

Madden is perfectly cast as Prince Charming and is a wonderful addition to the world of Disney but the movie did kick off a series of live-action remakes that no one asked for. I'll defend Cinderella (2015) because it was a beautiful retelling of the classic story but we do have to knock it down a bit because it ended up giving us Beauty and the Beast (2017) and that was really torture for us all.

1917 is a movie that really tests your knowledge of actors from the United Kingdom and whether or not you can recognize their voices. Happy to report that I recognized Richard Madden's voice before he ever stepped on screen. The Sam Mendes movie, which was nominated for Best Picture, is a look at a battle in World War I that had two soldiers fighting to get information across enemy lines to another unit. And during the journey that Lance Corporal William (George MacKay) takes, he meets other soldiers along the way.

One is Lt. Joseph Blake, played by Richard Madden. He's only in 1917 towards the end but it is worth it because the movie as a whole is beautifully shot and the story is one that will tug at your heart but getting to see Richard Madden at the end of it all is an exciting little treat. Oh, and Andrew Scott is also there!

Lily James and Richard Madden were reunited (relatively quickly) for Branagh Theatre Live: Romeo and Juliet. Directed yet again by Kenneth Branagh (along with Rob Ashford and then directed by Benjamin Caron for the film), it is the story that has become known far and wide by fans of William Shakespeare. The classic story tells us of families battling with each other and the result is the forbidden love of Romeo Montague and Juliet Capulet.

The fact that Madden and James are playing Romeo and Juliet is interesting because they are, famously, teenagers. But it is a hard play to pull off seeing as we have had so many adaptations and productions put on for it. Still, Richard Madden tackling Shakespeare is impressive as it isn't an easy thing to do but Kenneth Branagh knows better than anyone how to put on a Shakespeare and why not experience the magic of Romeo and Juliet?

Richard Madden fans have distinct ways they discovered him and one of them is the show Sirens. The 2011 comedy series follows paramedics and their journey into doing the right thing while also trying to live their lives, something that comedies in the United Kingdom have nailed in a way that we haven't really gotten here in the United States. Plus, seeing Richard Madden in a comedy is a very rare thing for later in his career.

Sirens is described as “an insight into the lives of three paramedics, who must deal with the stress and tribulations of the job as well as their personal lives.” So what a fun way to explore Richard Madden as an actor that isn't going to make you cry! Because let's be honest, most of the content we're seeing from him results in us crying over Madden's character so Sirens is a nice change of pace.

After Game of Thrones, Richard Madden had another show called Klondike. Coming out in 2014 and only having one season, Madden played Bill Haskell and the show had a relatively stacked cast with Madden straight off of playing Robb Stark, Tim Roth, Conor Leslie and more. The three-episode mini-series has a current Rotten Tomatoes rating of 80% so it is a pretty well-liked series for Madden and is another historical drama for him. Released by the Discovery Channel, it is based back in the 1890s so if you were missing Richard Madden in historical “garbs” after Game of Thrones, you can head right into Klondike.

The description for Klondike is as follows: A story about the lives of two childhood best friends, Bill and Epstein, in the late 1890s, as they flock to the gold rush capital in the untamed Yukon Territory, a land full of undiscovered wealth and ravaged by harsh conditions.

Ever wonder about the Medici family but didn't want to commit to learning about it? Well, can I interest you in Medici starring Richard Madden on Netflix? Based on the family in Italy who rose to power during social upheaval, the Medicis brought art and life to Italy while also facing their own lust for power and control over the country. In a three-season series, we get to follow Madden as Cosimo de Medici and while the show wasn't renewed for a fourth season, it did have a satisfying end.

And honestly, what is better than a historical drama that brings us absolutely beautiful actors as these real-life people? Because otherwise, I don't think I'd want to sit and learn about the Medici family but if you throw Richard Madden into the mix, I'm a lot more excited about learning about Italy during the Medieval period. It's the blue eyes that really scream “Italy” for me.

10 Movies 80s Kids Admitted Traumatized Them Most in Life