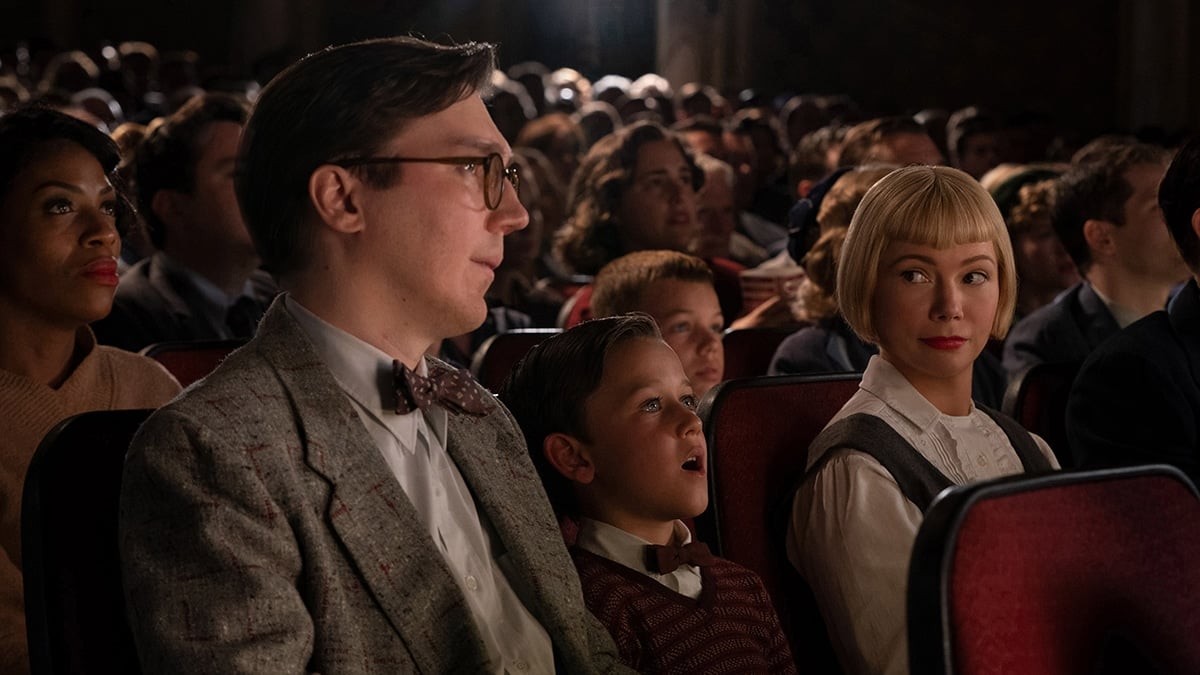 Steven Spielberg. It’s less a name than a cultural force, a specific brand of not merely a single director, but a style of filmmaking that is instantly recognizable. To say that nearly everyone in about the last 50 years can point to a film of his that shaped them and their love of movies is not an exaggeration but a statement of fact. A recognition that somewhere, sometime during your life, there’s a good chance a movie of his (or more than a few) will become one of your touchstones.

Did you thrill to the horrors of Jaws or Jurassic Park? The adventurous fantasias of the Indiana Jones movies? The historical drama of Amistad, or the war epics Schindler’s List and Saving Private Ryan? More family-friendly fare such as E.T. and Hook? Or the more cerebral ruminations of Lincoln and Bridge of Spies? For Spielberg, there’s always been something for everyone, and his heart has always been in his work.

But not his history. Spielberg’s personal experiences have always deeply informed his films, but The Fabelmans is his most personal vision yet, the kind filmmakers typically dream will launch their career, not culminate it. Our viewpoint character Sammy Fabelman (Gabriel LaBelle), is a clear directorial stand-in, and many of the details correlate to Spielberg’s own life. In other words – semi-autobiographical.

Falling in Love All Over Again

It’s only fitting that The Fabelmans begins with an explanation of why we love films and why Sammy would devote himself to them. Regardless of our vocation, we tend to remember how it came to be our calling, whether we could follow it or not. From the time young Sammy is awed, thrilled, and frightened by his first time in a 1952 movie theater, we can’t help but be swept along with him in its nostalgic rumination on art and family.

It’s a glance that’s tailor-made for the season and will no doubt be showered with praise and accolades, following the example of its lauded TIFF premiere. But there’s no contempt in its familiarity, and Spielberg takes the most generous of views on his very imperfect parental stand-ins. Paul Dano is his engineer father, Burt, who is less inclined to support his son’s artistic aspirations. Michelle Williams is his mother, Mitzi, another Woman Who Could Have Been if the times had been more hospitable to her talent and ambitions.

Burt is not neglected or condemned, but Mitzi is the one who could be called the movie’s inspiration, providing the wisdom and encouragement Sammy needs to take to heart.

Such is the movie’s compassion that it extends even to those who can’t be counted as remotely supportive towards Sammy, to the girlfriend who fetishizes him for being Jewish, some of the anti-Semitic bullies he encounters in supposedly freewheeling California, and even Bennie (Seth Rogen), the surrogate uncle who is having a borderline affair with his mother.

Ebert once remarked, “The movies are like a machine that generates empathy.” And like the loftiest of artistic dreamers, it is Sammy’s obsessive desire to see, to record, to understand that allows him to see people and the times, even as they change. But as his Uncle Boris (Judd Hirsch) warns, it’s also an addiction that could tear him apart.

We’ve all heard the warnings before, seen the dysfunctional families, and watched as directors lovingly recall the times and people forever gone, which shaped their coming of age. But rarely have they felt as sentimental without resorting to mawkishness and as willing to treat those closest to them as the heroes and heroines of their own stories. And with returning collaborators that include co-writer Tony Kushner and cinematographer Janusz Kaminski, few will be able to resist, or wish to. Just see The Fabelmans in its natural theatrical environment and prepare to laugh at its final celeb cameo.

After debuting at the Toronto Film Festival, The Fabelmans will hit theaters on November 11.

Check out the latest on movies in theaters now.