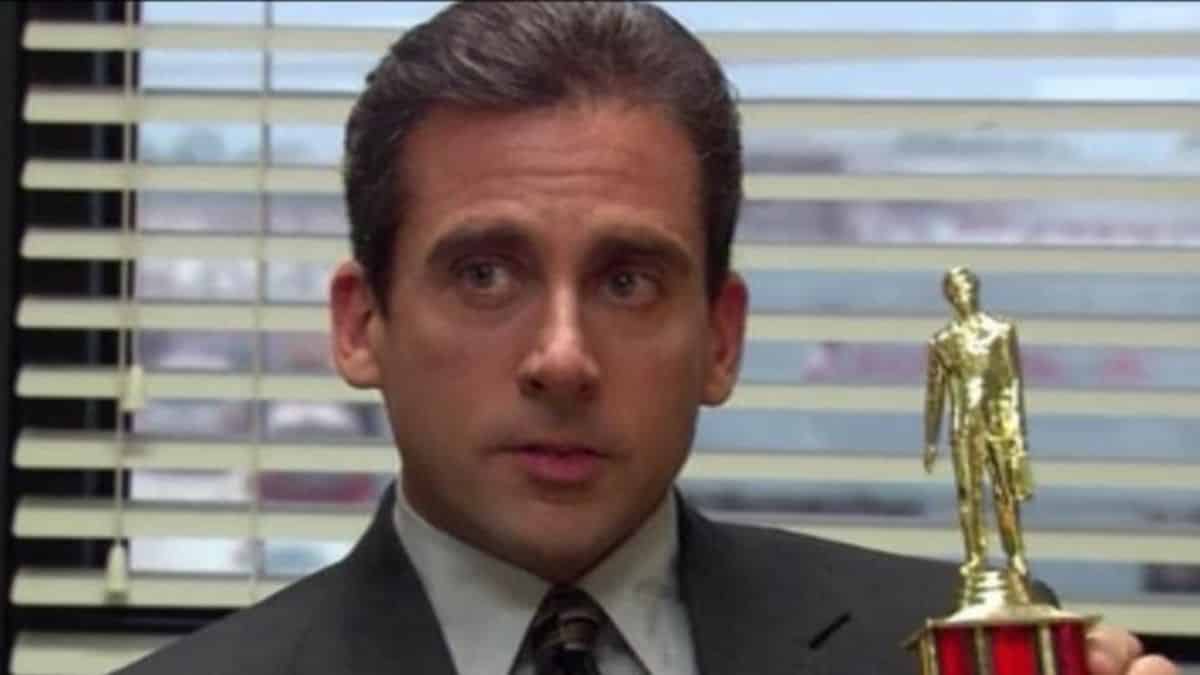 The Office: An American Workplace was a popular T.V. sitcom aired on NBC in 2005. However, some people may not know that the series began life in England. The Office was a groundbreaking comedy, the brainchild of Ricky Gervais and Stephen Merchant. The series aired first on BBC 2 in 2001 and was a success in the U.K. before its final show in 2003.

The Office followed the life of a small-town paper firm Wernham Hogg. Its manager, David Brent, led a group of realistic characters for two seasons, with some actors from The Office enjoying notoriety and glittering careers in film and television. For example, Martin Freeman is now famous for Fargo, Breeders, and Sherlock, as well as many critically-acclaimed films.

The BBC sitcom used a fly-on-the-wall documentary style. It inspired many other shows, including Parks and Recreation and Modern Family. Gervais was a fan of Rob Reiner's This is Spinal Tap‘s mockumentary format and made his awkward glance at the camera one of the funniest parts of the show.

After Gervais and Merchant sold the rights to NBC in 2005, they turned the British series into one of the most acclaimed series on United States TV. Unlike other British shows treated to an Americanized makeover, NBC made it even bolder. The Office: An American Workplace went big with an army of hilarious recurring characters.

After its lukewarm reception with U.S. critics, the series changed from following the ironic social realism of the British version. Instead, it became a zany celebration of everyday people.

It also features a wide range of tertiary and stock characters with borderline personalities (Angela), ambiguous backstories (Creed), and inflated egos (Robert California). The result was an NBC comedy show that deserves to be in the conversation with the best TV comedy shows ever.

But which one was better?

The two shows are so different, the characters at such diverse development arcs that it is hard to declare an overall winner. The U.S. version went on for nine extensive seasons, while its U.K. mother show went for only two short seasons with 30-minute episodes, followed by a 2-part Christmas special. It meant that the characters in the American Office were far more well-developed than their U.K. counterparts.

With Dunder-Con 2022 in the rearview, there is never a better time to discuss The Office: An American Workplace. One way to celebrate its annual return is to compare the most significant characters from the two shows. So, here is a list of match-ups to decide which character did it best in these comedy masterpieces.

This question has been rumbling for The Office fans on both sides of the Atlantic since The Office's American offspring was born. First up, we have David Brent with delusions of grandeur, a need to be loved, and his self-delegated duty to entertain staff. Brent sees himself as an entity beyond a paper firm manager, made clear when he says, “I am a friend first, a boss second, and an entertainer third.”

David Brent is a character viewers root for, though simultaneously kind of hate. He is the office everyman: the people's boss and wannabe office jester. However, his penchant for inappropriate jokes often sees him backpedaling and explaining his way out of trouble.

David also has no friends and often tries his hardest to impress the office bully, Chris Finch, who sees him as a doormat and makes him the butt of his jokes. David also has a relationship with his trusty sidekick, Gareth Keenan, though he frequently treats Gareth as his lackey. In one scene, Gareth gives him a back massage as David looks defiantly at the camera.

Gervais had no formal acting training, yet he embodies the character's flaws and doubts, apparent in the final episode when David begs for his job back. It is difficult to think of a funnier comedy character. The episode where he performs a dance routine made up of “Flashdance mixed with M.C. Hammer s**t” at a staff charity event is the stuff of comedy legend.

On the other hand, Michael Scott is played by the comedy actor Steve Carell. Carell's genius, like Gervais', is making a childish, selfish, petty man somehow loveable.

Even in the first episode, his desperation in not losing Jim as a friend reveals an odd yet sad childhood that untangles itself as the show progresses. Michael, too, has aspirations to be an entertainer; his ripped-off comedy routines and his improv classes allude to this.

Michael's catchphrase, “That's what she said,” gives him the perfect cue for his Gervaisian camera glance, though arguably not as funny as David Brent's. Nevertheless, Michael is allowed more time to develop his arc, which means we see so much more of him. Like David, he finds happiness and companionship in the end, which everybody wants.

As Michael's character matures, so does his relationship with other characters. One of the show's funniest running disputes is between Michael and Toby, the head of human resources (played by head writer Paul Lieberstein). Toby irks the manic boss with his political correctness and sensitivity training, pouring water over Michael's new schemes or staff entertainment initiatives.

Given that Steve Carell's perfect depiction of Michael Scott had more time to grow in the series, he can't lose. However, without David Brent as his predecessor, he wouldn't exist. It is just too hard to separate these two visionaries.

John Krasinski vs. Martin Freeman is the closest match in personality and character depiction. Like Jim Halpert, Tim Canterbury is a down-to-earth, self-deprecating boy next door who falls in love with Dawn, the receptionist.

Dawn and he fill the day's monotony by pranking Gareth (UK Dwight) religiously. The only significant difference is Tim's lack of self-belief compared to Jim's quiet confidence. Tim brings not only a good dose of understated sarcasm to The Office, but he also brings humility and shows hopeless bewilderment at office life.

This comparison presents another tough choice: both characters are compelling, crucial to both shows' balance, and significant drivers of the more extended plots. Without Jim Halpert and Tim Canterbury, there is no show. However, the original version just shades this one.

Just as with all character comparisons, the duel between Dawn Tinsley (Lucy Davis) and Pam Beesly (Jenna Fischer) is challenging to assess. Pam is a central character in the U.S. series, while Dawn's love story with Tim carries us to the finale's final moments.

Also, her long-suffering wife to Lee's dullard warehouse worker husband adds gritty pathos to the show's dark humor. Finally, Dawn makes a strong foil for Tim — her sidekick to his outrageous pranks on Gareth remains some of the BBC show's highlights.

However, Pam's empathy for Michael's childish side and her deadpan one-liners in the face of ridiculous adversity means she takes the ‘W' here.

Two completely different characters but two tropes with which most office workers are familiar. Gareth Keenan (Mackenzie Crook) and Dwight Schrute (Rainn Wilson) are the same people. But where Gareth is a far more annoying character, Dwight is a force of nature.

Gareth is a boastful, delusional stickler for procedure who possibly suffers from the Dunning-Kruger effect. He is that guy in the office who others avoid at the water fountain. Dwight is likewise an acquired taste: his love of office procedure is only dwarfed by his hatred for those who abuse it.

However, like Pam, Jim and Michael, Dwight is allowed to blossom into one of the all-time great sitcom icons. Of course, Gareth makes The Office a much better show, but Dwight sometimes is the show. Entire episodes and sub-plots are about him.

His Amish roots, his beet farm (helmed by his menacing, ‘rural' brother, Mose), and his abusive childhood (shunned as a child for years for wasting excess oil from a can of tuna and declaring he had self-circumcised as a kid) make Dwight the clear champ in this round.

Chris Finch (Ralph Ineson) plays a great foil to David Brent, who sees him as his best friend when he has no respect for the Wernham Hogg boss. Todd Packer (David Koechner) starts similarly, then drifts off, becoming a straighter character later in the series.

Keith Bishop (Ewen MacIntosh)'s monotone office loner is hilarious for those few moments he makes an appearance, primarily in his job appraisal scene with David. But Kevin (Brian Baumgartner)'s hulking, lethargic sweetheart is no match for his British predecessor. The show needs Kevin more than it thinks.

Oscar and Oliver are similar in that their boss likes to use their ethnicity (and, in Oscar's case, his sexual preference) to demonstrate how politically correct he is. Unfortunately, this often ends with a cringe-worthy outcome. Oscar (Oscar Nuñez) wins this battle for his more rounded, sardonic Latino office gossip over Oliver (Howard Saddler)'s laid-back, nice-guy role.

This is not even close. In The Office, Neil Godwin (Patrick Baladi) is the area sales manager and eventually becomes David Brent's direct supervisor — though Brent won't accept it. Neil's straight-man character's occasional rebuke of Brent doesn't come close to Jane Levinson (Melora Hardin)'s unhinged, self-destructive man-eater in the U.S. version. She destroys the competition here, just as she does her career and Michael's bank balance in the U.S. series.

Clean House, Happy Home – How Often Should You Clean?

A Look Into the Complicated History of the Rubik’s Cube