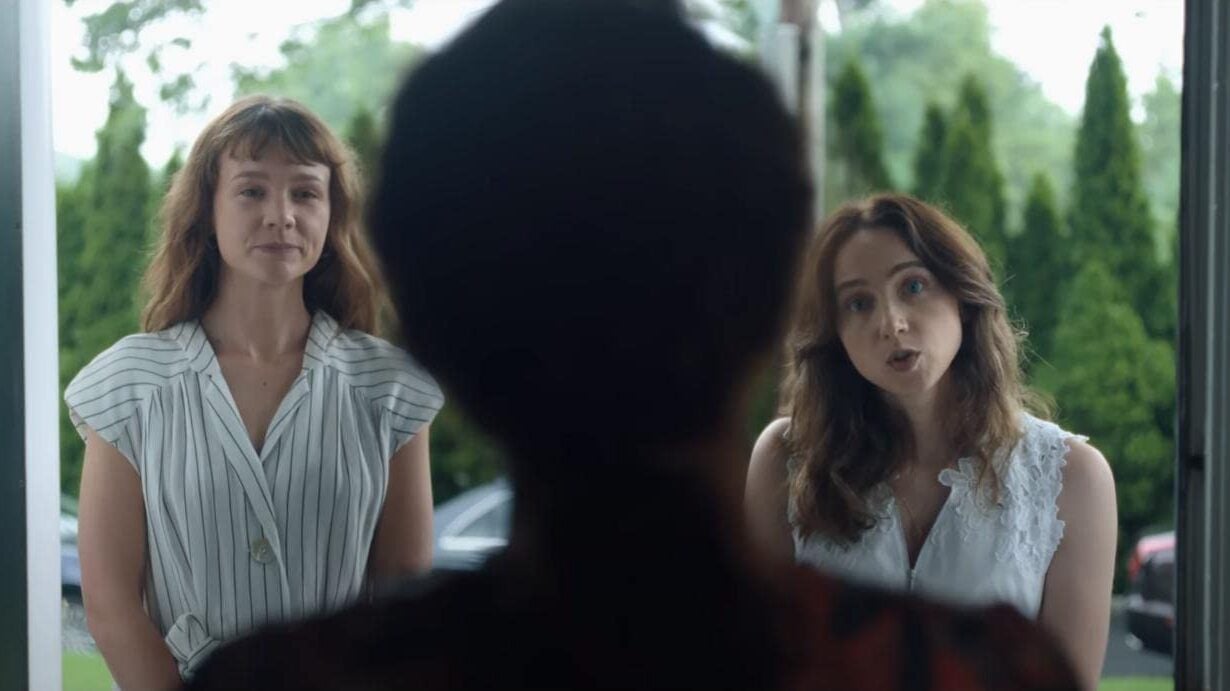 The most obvious fact about the new movie She Said, which follows the New York Times reporters who broke the Weinstein story, is that it comes at a time when the truths it helped reveal are still being debated. Or darker still, under attack.

Even as I was on my way to the screening, another critic mentioned a crucial difference between this film and Spotlight, which I hoped She Said would resemble in terms of making the work of journalism itself (which in that particular case involved the Catholic Church covering up sexual abuse), not only fascinating, but watchable for audiences. But as they pointed out, people can be counted on to care about children. But not so much about women.

She Said is astute in its awareness of this, and how the stakes in uncovering Weinstein’s wrongs are about far more than one man, or even one industry. As the film begins in 1992 Ireland, a young ingénue walking her dog happens upon a film set, complete with extras dressed in the period costumes of the time they’re portraying. A smiling woman beckons her over, and she quickly becomes a part of that world, bright-eyed and eager to make a career in film behind the scenes.

Cut to an indeterminate amount of time later, and she’s running down the street in tears, clothes rumpled, terror in her eyes and body. It’s not how the movie is supposed to end, yet for so many, it was precisely how it did, even for those who supposedly had access to power and more crucially, visibility. The script was startlingly the same, always with a young, vulnerable woman who was likely to blame herself, and later, a payout that involved a nondisclosure agreement that muzzled them. For many, their career in film ended, and for all, the trajectory of their lives was forever changed.

A system such as this thrived on silence and complicity, and breaking it was no easy task, for those who suffered the worst of it and those who found it far easier to look the other way, especially when money, the thrill of moviemaking itself, and the star-studded access to glamor and power often accompanied it. So how does all this come tumbling down? For NYT reporters Megan Twohey (Carey Mulligan) and Jodi Kantor (Zoe Kazan), it was very, very carefully.

Fresh off the Trump election and the Bill O’Reilly harassment scandal, the two decide to pursue claims of harassment and rape by one of the most famous, prolific producers of modern Hollywood, in spite of their doubts over whether anyone will care. As the two dug deeper and follow not so much money as an underground network of whispers, they discover the extent of how much one man was allowed to get away with, and the surprising amount of people who were willing to enable him, which included Lisa Bloom, daughter of the famed feminist attorney Gloria Allred.

Following the lead of the 2019 film The Assistant, She Said keeps its central predator off stage, limiting him to phone conversations, and when he finally does make an appearance at the Times, obscuring his face. Even more shrewd is writer Rebecca Lenkiewicz’s incorporation of actual recordings of Weinstein's attempts to coerce a woman into a hotel room, and director Maria Schrader keeping her focus on the crime scenes, from hotel rooms to hallways, as women recount their stories.

Mulligan and Kazan also fit their roles to perfection, with their established indie cred lending them the same understated swagger as the rarefied status of being accredited New York Times reporters. They stride into their offices and are competent and vulnerable as they question complicit sources and those risking everything to tell them their stories, even as they insist on remaining off the record. And as there’s always another element to female professionals who dare to have a home life, with husbands who casually provide support in realistic NYC apartments, and casually blending (rather than balancing) childcare with their work.

But She Said never forgets just what involves bringing a man like this to justice, realistically giving us a sense of how an investigation is built, sources confirmed and protected, and documents uncovered. Its righteous fury as lightning in a bottle is finally released, altering an entire generation. But the movie can’t shed its own baggage or delve into the complexity of behind the scenes choices, and the complicity of even the most well-meaning art.

Brad Pitt, who himself knew of Weinstein’s behavior and is doing his best to discredit his ex-wife Angelina Jolie, who’s accused him of abusing her and their children. Out of the many high-profile actresses Weinstein preyed on, only Ashley Judd appears as herself, with one of Gwyneth Paltrow’s luxurious dwellings standing in for her, and even Rose McGowan’s presence limited to a series of phone calls voiced by Keilly McQuail.

There’s a lot to parse as to what has really changed, but also much of value for what She Said does accomplish as a tribute to the power of women’s voices, be they elite writers or the many who risked it all to finally speak out, with one of them, the young woman from the beginning played in middle age by Jennifer Ehle, deciding to reveal her experiences after her cancer diagnosis. It’s the strongest choice the movie makes in its refusal to get bogged down in celebrity and focus on Weinstein’s lesser known victims, and how their voices were silenced just as they were coming into their own.

The real question is whether efforts like this will be enough to pull us back from the brink. The month after this story broke, over 82 women came forward to accuse Weinstein of abuse. He's now serving a 23-year prison sentence. I swelled as my screening ended with enthusiastic applause. Then I checked my phone, and learned that Trump was once again running for President.

She Said debuts in cinemas November 18.

24 Ways To Approach the Holidays With Less Stress