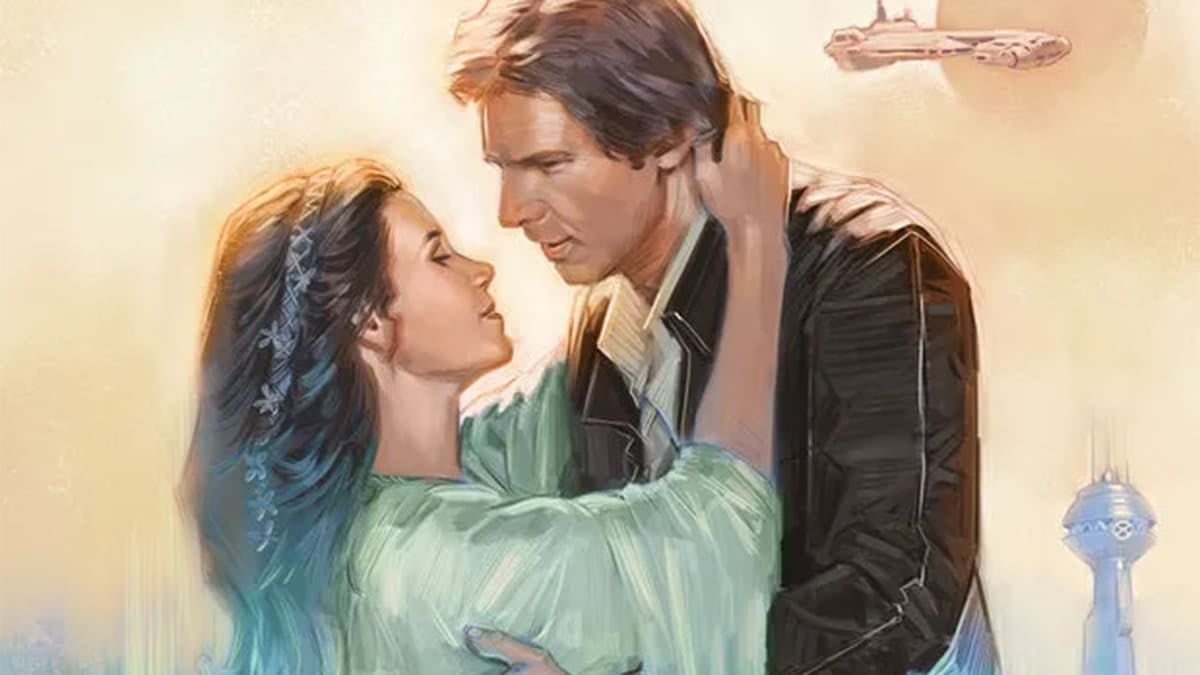 These days, Star Wars books are releasing faster than ever before – and no new release is the same as the last. One month you might see a book set in The High Republic on the New York Times Best Seller list; the next, there’s a new story about Han and Leia’s wedding.

The release of Star Wars: The Princess and the Scoundrel by Beth Revis marks the first Disney-era canon novel to immediately continue the story of the galaxy after the Emperor’s fall in Return of the Jedi.

The emotional journeys its main characters embark on – a nice contrast to the literal voyage of the Halcyon starcruiser that serves as the backdrop for Han and Leia’s honeymoon – play into the larger uncertainty of a galaxy reeling from a years-long war.

Within its pages, readers will find a handful of surprises along with plenty of familiar faces, themes, and Star Wars-specific tropes. But is the book worth reading?

Hours after the second Death Star meets its grand fiery end in the skies over Endor, Han Solo and Leia Organa face a daunting reality. The immediate aftermath of the end of a galactic civil war isn’t exactly the best time for making big life decisions. Amidst the ongoing celebrations and the relief of victory that comes before the new weight of whatever comes next, they come to a mutual decision that will alter the course of galactic history forever.

They’re going to get married.

Mon Mothma and the other leaders of the newly forming government are already hard at work planning their next steps toward snuffing out the Empire for good. The death of the Emperor won’t stop Imperials from clinging to any remaining power they may hold.

Time is fragile, and the urgency is not lost on Leia, who has become the face of the successful rebellion against the Empire. But love is stronger than many things – blood, danger, the realization that she is the daughter of a former Sith Lord, and no one can find out the truth.

Other Star Wars books and comics set around this post-Return of the Jedi period show that what remains of the Empire does not go down without a fight. This is a critical time in the galaxy and, therefore, the perfect setting for a story diving deeper into the complications Han and Leia faced both in the New Republic’s early days and at the beginning of their marriage.

Revis – who also expanded Rogue One protagonist Jyn Erso’s backstory in the Star Wars novel Rebel Rising – is the first to tell the story of Han and Leia’s wedding and its immediate aftermath in Star Wars canon.

Han and Leia are not in the same place romantically in The Force Awakens as where the story left them in Return of the Jedi. At the end of the original trilogy, the two were madly in love and all but inseparable. However, the launch of the sequel trilogy showed them coming together again for the first time in years, distant and broken, their relationship a faded shadow of what it once was.

The Princess and the Scoundrel brilliantly set up this drastic shift in the couple’s dynamic without taking away from the strength and depth of their love in either story mentioned above. They belong together, but there are small wedges that are sharp enough to drive them apart eventually.

Han is stubborn and wary of leaving behind his old, less structured life. Leia is deeply attached to her political work and fearful of letting down her guard. The galaxy is the safest it has been in decades, yet danger still looms at every turn. Things are only going to get worse politically down the line, but it’s not a lack of dedication or desire that will tear the couple away from one another. It’s heartbreak.

In this way, Revis takes a Star Wars story set in a fictional universe and makes it relatable. In franchises such as Star Wars, there is possibly nothing more important than using stories to build bridges between what’s real and what’s pretend. The peak of Han and Leia’s love story ends on a hopeful note, even when tragedy lurks in the far-distant future. Conflict and war tear people apart in stories and real life. They also bring them together; make their bonds stronger.

If it weren’t for the kidnapping of Princess Leia in A New Hope, Han Solo likely would never have met his life’s love. The Princess and the Scoundrel reminds readers that love conquers all, even in times of uncertainty.

Is the Princess and the Scoundrel a Romance Novel?

Star Wars and romance go together – well, like Han Solo and Princess Leia. But the romance genre within the larger scope of Star Wars as a whole doesn’t exactly fit the mold of what you might think of when discussing a stereotypical romance novel.

The Princess and the Scoundrel aligns with what fans might expect from a love story set in a galaxy far, far away. There’s a little bit of physical affection – hand-holding, the occasional kiss or two. But like other love stories in Star Wars, this book is more about the people in love and the emotional weight that accompanies this.

Even on their honeymoon, Han and Leia find themselves on an emotional journey individually and as a couple. Both characters are adults accustomed to living separate lives, mostly without answering to anyone but themselves. But, now they’re married, they have to come to terms with all the changes associated with becoming a permanent presence in another person’s life.

But it’s also Star Wars. So there are plenty of explosions, plus there’s also some weird Ewok tree magic and a healthy dose of Imperials doing shady business on random moons. A little something for every kind of Star Wars fan, really.

Whether romance in Star Wars is your cup of jawa juice or you prefer a more traditional action-adventure story littered with gunfire and things blowing up, this book has it all. Its seamless worldbuilding (it does not feel like a cheap ad for Disney’s Star Wars hotel) and cohesive storytelling makes it the ideal read for both Star Wars reading veterans and those new to the genre.

The Princess and the Scoundrel is available on August 16, wherever books are sold. Follow us here for the latest on books coming out now.

Review: Sprung Is a Hilarious New Comedy That Hits Close to Home