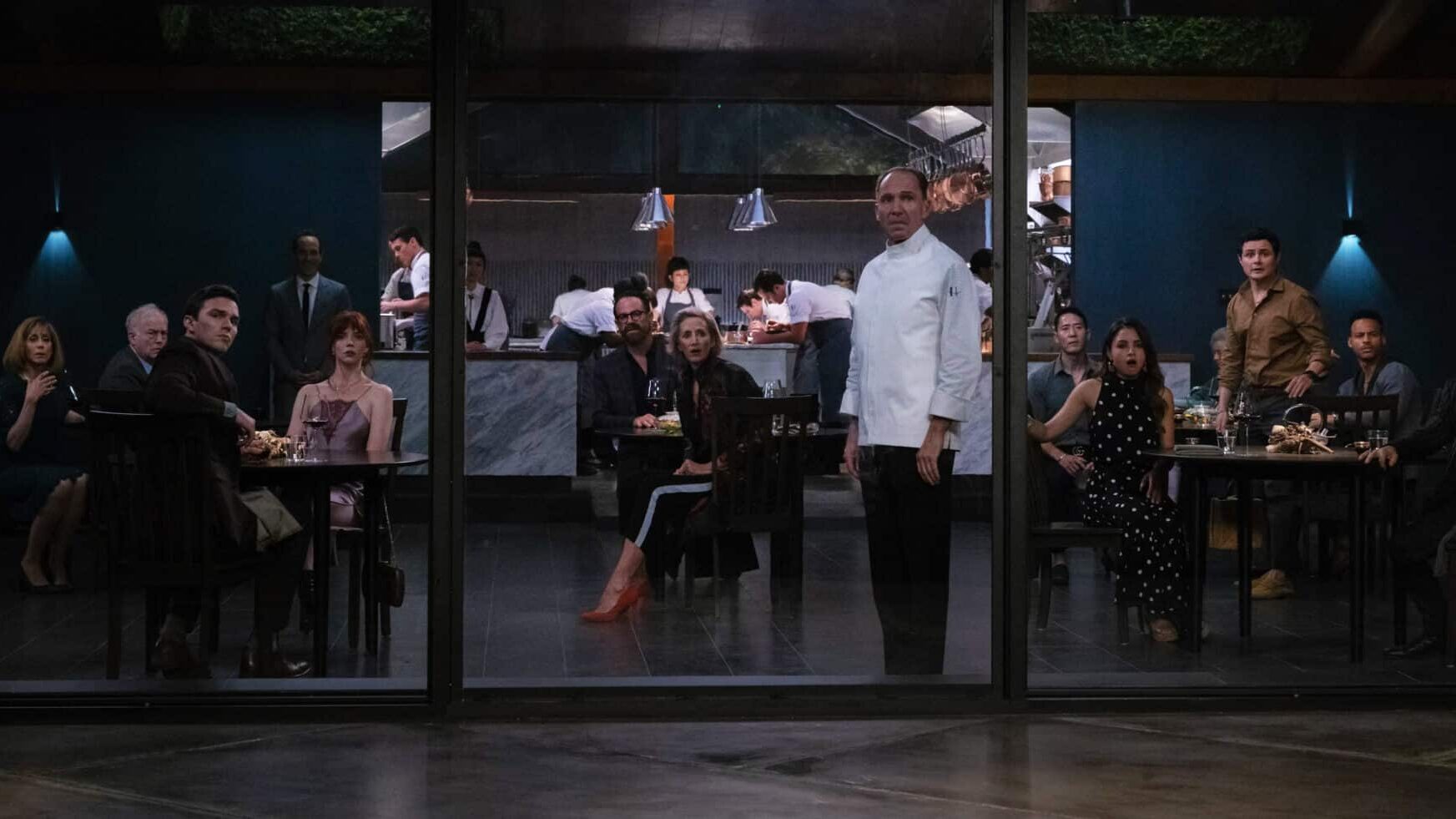 Is there anything more delectable than watching the rich eat other? In our era of rampant inequality, and near constant barrage of scandals which involve the ripping off of those with little being robbed to the point of nothing, it's not likely.

The real question in the dark satire The Menu is whether the metaphor will remain just that, or curdle into something far more literal. But we're keeping spoilers to a minimum here.

When the recently coupled Margot (Anya Taylor-Joy) and Tyler (Nicholas Hoult) head to a remote island for a night of exquisite eats by the world-renowned Chef Julian Slowik (Ralph Fiennes) at his exclusive restaurant, there are more than a few hints of a night of wicked delights for all. The opening credits invite us to experience the menu, and there will be careful notations of the ingredients for each course as the night descends into masterfully controlled chaos.

Voldemort in the kitchen jokes aside, an industry which caters to clientele so elite that the appetizers include algae, aka pond scum, as an ingredient are among the easiest targets imaginable. But The Menu manages to sprinkle in ingredients as pointed as the culture it satires, the kind which has every indication of a Get Out for upscale foodies. And unlike other films which offer obvious class commentary, such as Triangle of Sadness, The Menu manages to keep its focus.

It was likely already far too late to escape by the time creepily efficient head of staff Elsa (Hong Chau) sternly announces to her guests, “Here are we family.” When a corporate employee makes such a proclamation, it's never good, but all signs quickly indicate a cult in plain sight. There's the shared living quarters for house staff (except for Fiennes of course, who is referred to as Chef by his disturbingly loyal followers), a kitchen that's run with unsettling military precision, complete with the unified shouted responses to orders. Such unquestioning devotion to a leader would be enough to make a four-star general burst into tears of joy.

Our Guests for the Evening

Good thing the customers mainly fall into various categories of repulsive, keeping anxiety on their behalf to an acceptable level so the comedy can flow. There are the entitled nouveau riche tech bros (Rob Yang, Arturo Castro and Mark St. Cyr), the old money couple (Judith Light and Reed Birney) who can't even recall the delicious feasts they've consumed during their numerous visits, the egotistical restaurant critic Lillian Bloom (Janet McTeer) and her enabling editor (Paul Adelstein), an aging unnamed movie star who will admit to his status as name-dropping whore before the night ends, and his equally toxic assistant Felicity (Aimee Carrero) who intends this to be her last in his employ.

Margot (Anya Taylor-Joy) is the sole outlier, a last-minute substitution for Tyler’s first choice, and thus the only person who may have a chance at surviving the night. Tyler’s clearly betting that what Margot lacks in money and status will be amply compensated for in terms of image, constantly referring to her as a cool girl even as he’s certain that she’ll be as taken with Chef, if unable to match his shamelessly slavish devotion.

The problem for him is Margot actually is cool and remains unimpressed by the “summit of Mount Bullshit,” as she puts it, shrewdly noting the dynamics that the other guests remain oblivious of, even as they remain front and center for all to behold.

Eventually of course, it becomes too obvious for even them to remain removed from it all. Or rather, events which include pictures on the food of their various misdeeds quickly escalate to actual bloodshed, and even the consciously detached Lillian must acknowledge that theater this is not.

It doesn’t exactly require penetrating observation to bet that all of them have some dirty laundry, but keeping such familiar plot threads this funny is partly thanks to a crew who have done plenty of maneuvering throughout their respective fields and their on-screen economic settings. More than a few have worked on Succession.

Director Mark Mylod has mostly made his name as a TV director for shows such as Shameless, Game of Thrones, and the aforementioned Succession, while writers Seth Reiss and Will Tracy have written for The Onion News Network and have each lent their talents to Seth Meyers and John Oliver respectively.

Cinematographer Peter Deming is no stranger to the odd comedic escapade either, having worked on Mulholland Drive, Drag Me to Hell, The Cabin in the Woods, and the 2017 Twin Peaks series. He and production designer Ethan Tobman are a match made in indie film heaven, with Tobman's exquisite touch in films such as Room, along with various music videos for Beyonce, Taylor Swift, Kendrick Lamar, and Ariana Grande being put to use with all the delicate precision of a razor blade.

A Joy to Behold

For all that, The Menu still feels the need for an audience surrogate to root for in Anya Taylor-Joy. From her breakout role in The Witch, she’s built up something of a reputation as the last woman standing, and swapping out her trademark blonde locks for fiery red tresses is a cinematic tipoff for a woman who can and will put up a fight.

Later developments confirm that Margot has learned to survive in this cutthroat world by necessity, to earn her own shadowy living among them. She is no heroine due to the solitary life this kind of work entails, and she’s no doubt among the elite in her own line of work, with none of the travails that others, namely women of color, must navigate in their own insular spaces. Margot may be able to save herself, but the values of The Menu require her to refrain from upsetting the status quo and violate the rules of her station by saving others.

It somewhat undercuts the mission of The Menu, which otherwise brilliantly portrays a world that feels as brutal as the nobles of pre-Revolutionary France, complete with characters who are finally encountering and facing the violence and insanity of their own making. Normally we must depend on streaming services for such savage takedowns, from “The Best Revenge Is Dressing Well” episode of Our Flag Means Death, the deeply Chicagoan antics of South Side, or the sharply poetic Blindspotting series, which sets its concerns in a matriarchal world deprived of men the prison system insists on commodifying for their own profit.

Yet for all the film’s criticism and allowing the help to bite back and women to stand up to male entitlement, its heart may be a bit too invested in what it’s attempting to take down. But its sheer willingness to bite the hand that feeds this world will be irresistible to those with a taste for what’s being served.

Each of the performers also manage to keep their characters far enough outside of the caricatures they initially appear to be, and The Menu doesn’t much bother to explain how Chef manages to inspire his devoted following, preferring take the values of this upper-crust echelon’s obsession with perfection to an extreme which seems insanely logical in execution.

It doesn’t dare turn its gaze to an audience who is unwilling or unable to shell out $1250 for alleged culinary delights, but it's difficult to heap blame on the hope that the working class can at least escape the burning hell that The Menu is anticipating awaiting those who could be counted among the most responsible.

The Menu hits theaters November 18, but we've got the latest on all the movies in theaters now.