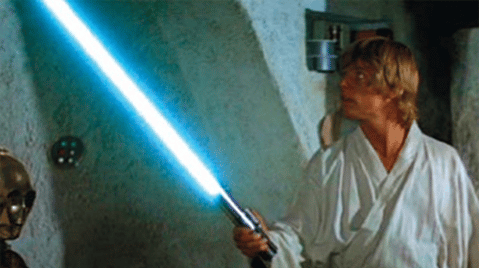 Please note that this story of Luke's blue saber is the story of it in the movies.

It does not cover any other elements of the expanded universe, Legends or current canon outside of the movies.

The history of Luke Skwalker's saber is as long as the Star Wars saga itself.

This makes sense really as Jedi Knights with electric swords is what Star Wars is all about really.

Well, you know what we mean.

We call it Luke's saber but it was really Anakin's.

Obi-Wan Kenobi picked it up as he left Anakin to die, having just bested him in their duel on Mustafar in Revenge of the Sith. He held it for many years until he gave it to Luke in A New Hope so hence fans often think of the blue saber as Luke’s.

But if the sword was originally Anakin’s, what is its story?

You may recall in Attack of the Clones that Anakin lost his arm in the duel with Count Dooku, thus continuing (or starting!?) the tradition for characters to lose their limbs in Star Wars movies.

Given the loss, Anakin required a second saber. And it is with this saber that the real story comes into play. This is the saber that Anakin used when he became Darth Vader.

So the blue saber had a tough start to life – it was initially used by one of the most promising Jedi that had ever been and then it became used by a Sith Lord.

By the time it is passed to Luke, the sword has seen a lot of blood split, including Jedi and younglings.

No wonder Kylo Ren wanted it so badly.

This weapon has been a part of some real Star Wars history and has let the blood of many innocents but in ANH, Luke doesn’t get to play swashbuckler, rather he gets to train with it on board the Millennium Falcon.

It’s not until the events of The Empire Strikes back does the sword truly became a part of Luke's legend.

In that movie, it is used by Luke to free himself from the ice trappings of the Wampa and then used by Han Solo to carve up his Taun-taun so that he could place Luke’s frozen body inside it to protect him from the cold.

The next time is a more dark moment.

Luke has undertaken training with Yoda on the swampy plant of Degobah. There comes a point where Luke comes across a cave. Effectively warned not to take his weapon in with him, Luke finds himself having a strange dream like experience where he must draw his saber to protect him from an advancing Darth Vader.

It is the first occasion we see Luke actively use the saber to protect himself. That it is a dream experience of a kind, does not diminish that Luke used the saber believing he was actually facing Vader.

Of course, Luke eventually faces Vader at Bespin’s Cloud City where they have an epic fight and get the measure of each other – so much so it’s a fight Luke cannot win and loses his hand for his trouble (just like his father had years before – on two different occasions!).

At this point, it is the stuff of movie legend that Vader reveals himself as Luke’s father.

But in all that excitement, Luke’s saber is actually lost down a shaft somewhere. And that, was apparently the end of that.

In Return of the Jedi, Luke fashions his own saber (while not mentioned in the film, it is a Jedi tradition to do so) and uses that saber when he destroys Jabba’s Sail barge and of course when he fought Vader aboard the Death Star, returning the favour by cutting of Darth Vader’s arm, an indignity he’s now suffered through three times!

But what of that lost blue saber?

This is where the saga of the saber begins to play out even further than any fan may have ever imagined.

30 odd years since it was lost both in movie time and real world time, it turned up again in The Force Awakens.

The sword was found to be in possession of Maz Kanata, a strange being who appears to be sensitive to the Force, or at least has a profound understanding of it. She set’s Rey up to find it as she knows the Force is calling her to it.

We do not really know but Maz knows the sword must find its way to Rey’s hands and so gives it to Finn as a place holder until Rey is ready.

Finn gets to do a dance with a Stormtrooper with the sword and then holds his own for a time against the father killing Kylo Ren at which point Rey then gets her hands on the sword and has an epic battle with Ren.

Ren of course being the grandson of Darth Vader, the man who used to own the sword that Rey fights him with. The sword has come full circle in an odd manner.

But Rey didn’t want the sword from Maz in the first place. The dream sequence spoked her totally – so much so that even though she knows she must find Luke Skywalker, she still hands him the sword when they first still meet at the top of the ‘Jedi Steps’ on the island where Luke has hidden himself away.

It’s a poignant moment – Luke’s blue saber has been returned to him after so many years.

One can only imagine the feelings that were running through Luke’s mind at that moment – the last time he saw it, his father had just cut off his arm and revealed himself.

What happens to the saber in The Last Jedi?

Rey gives it to Luke who then casually throws it behind him, down the cliff.

Rey then trains with it on Achto Island.

It's then used by Kylo to kill Snoke and the Praetorian guards.

As Rey and Kylo then Force duel for possession, the saber snaps in half, ending the legacy of the saber. And then we get to The Rise of Skywalker
It appears Rey's skills are complete and she has repaired the split sabre (or perhaps Leia has).
Luke shows Rey where Leia's saber is hidden on Achto Island and boom – Rey has two sabers on her person when he confronts Palpatine.

The Force Dyad is now so strong between Rey that she can pass Ben Skywalker Anakin's saber to him so he can fight the Knights of Ren which have turned on him.

But it means that the last Skywalker to wield the saber is actually the grandson of Anakin Skywalker.

A long history for small piece of metal.

Renting vs. Buying: The Math Behind the Decision