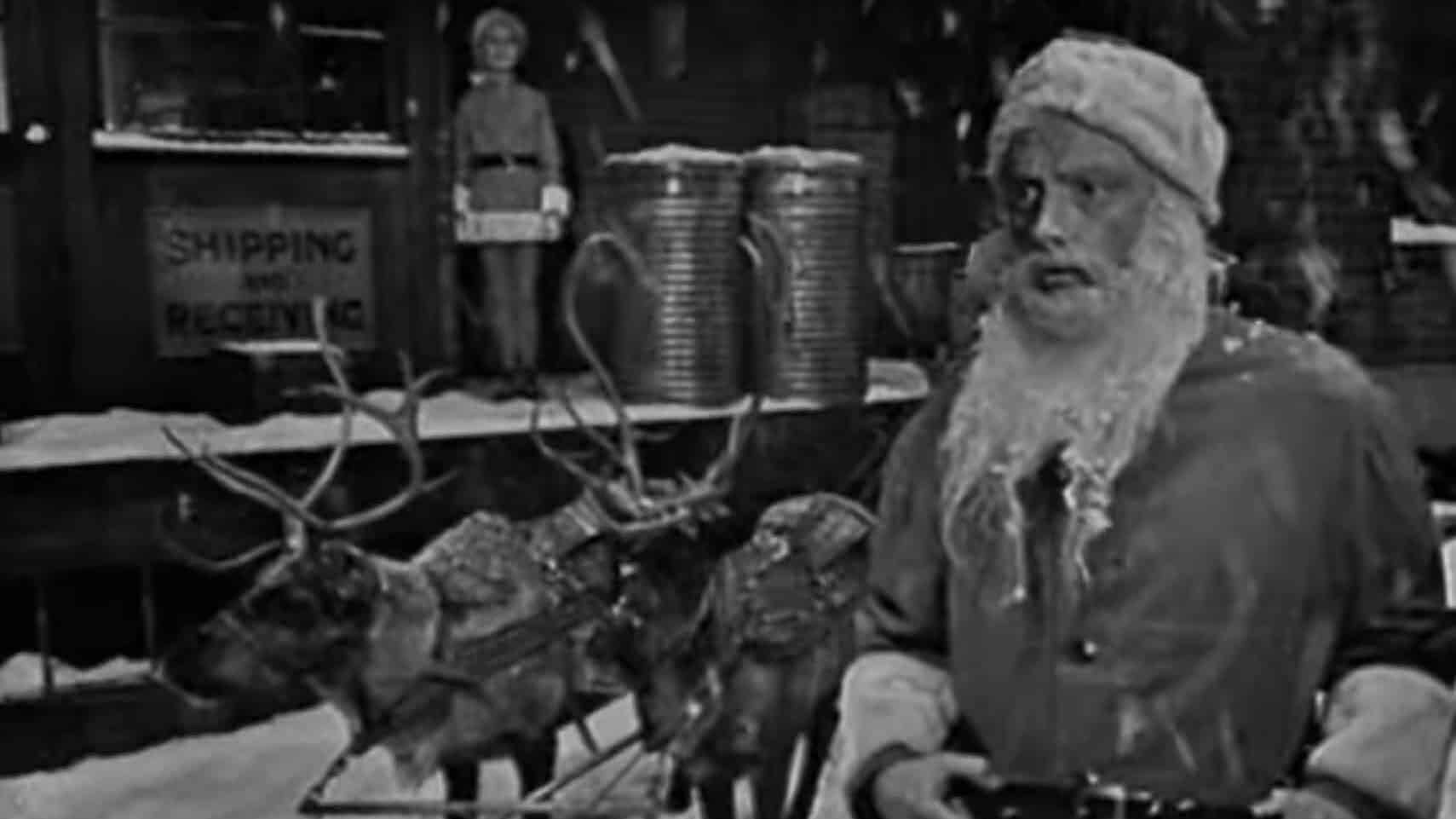 After three canceled TV reboots,Â The Twilight ZoneÂ today returns in a new form: virtual reality. As creator Rod Serling dubbed it in 1959, the fifth dimension has finally hit three dimensions 63 years later in a game for Oculus Quest 2.

Throughout the original runs of five seasons and 156 episodes, virtual reality wasnâ€™t something that was featured â€” or at least, not as wearable technology. Sure, people were occasionally body swapped or sent on impossible journeys through time and space. But the method was usually supernatural rather than technological.

But that doesnâ€™t mean that some details fromÂ The Twilight Zoneâ€™s original run havenâ€™t echoed in the 21st-century world, 47 years after Serling died. Here are ten things the original 1959 run predicted that have come â€” or are coming â€” true.

Starting with a real gut punch, â€œThe Midnight Sunâ€ provides a horrifying glimpse into a world where the climate is no longer hospitable for humans. Water is rationed, and temperatures hit 130 degrees by the end of the episode. As a result, itâ€™s not a comfortable watch, with visible sweat dripping from the cast at all times.

Of course, it was aired decades before the term â€œclimate changeâ€ or even â€œglobal warmingâ€ would be used. Here the culprit isnâ€™t carbon dioxide in the atmosphere, but the Earth physically moving closer to the sun â€” hence the episodeâ€™s name. Even at 11:55 at night, you canâ€™t escape the oppressive heat.

Okay, we accept that aliens arenâ€™t here at the time of this writing, but â€œThe Monsters Are Due on Maple Streetâ€ is less about space monsters and more about the monstrous behavior they awaken in the neighborhood.

With minimal intervention, paranoia and distrust gradually turn the occupants of Maple Street against each other, leaving them powerless to deal with an actual hostile invasion.

How is this a prediction? Meddling in social media is now seen as a viable tactic by governments worldwide, with so-calledÂ troll farmsÂ seeking to fan the flames of social division in other countries.

As Serling said in his outro monologue: â€œThe tools of conquest do not necessarily come with bombs and explosions and fallout. There are weapons that are simply thoughts, attitudes, prejudices… to be found only in the minds of men.â€

Job Losses via Automation in the Brain Center at Whippleâ€™s

â€œThe Brain Center at Whippleâ€™sâ€ â€” a forgettable episode from the showâ€™s final season â€” is a classic tale of reaping what you sow. A factory owner replaces his human workforce with machines before being ultimately replaced by the familiar mechanical face ofÂ Robby the RobotÂ himself.

This one speaks for itself. Automation has already come for jobs, and it will only get more commonplace as artificial intelligence becomes more sophisticated. Indeed, the McKinsey Global Institute forecasts that as many asÂ 73 million jobs could get the Whipple treatment by 2030.

Amusingly, fans spotted that much of the technology in the 2019 reboot was Whipple branded. So the firm must have been doing something right.

AI Assistants With Personality in From Agnes With Love

Speaking of artificial intelligence, â€œFrom Agnes with Loveâ€ may feel a little familiar to anyone with an Amazon Echo device. Agnes, a sort of Alexa of the 1960s, is on hand to advise computer programmer Jane on how to woo his co-worker Millie. But Agnes secretly sabotages the blossoming relationship because of her/its own feelings.

To be clear, Alexa doesnâ€™t like you in that way (thoughÂ it will sing a weird ditty if you say â€œI love youâ€ to it), but Amazon has worked hard on making the virtual assistant a genuine personality rather than just a disembodied voice. You can evenÂ pay for celebrity personalities if you like.

A Smart Home (Gone Haywire) In a Thing About Machines

â€œA Thing About Machinesâ€ isnâ€™t an especially well-loved episode. It feels a bit more action based in a way that hasnâ€™t aged well, with various appliances rising up against their cruel owner Bartlett Finchley.

But TVs, phones, and even electric shavers benefiting from artificial intelligence are real things. Notably, the self-driving vehicle ending Finchleyâ€™s curmudgeonly existence wouldnâ€™t prove to be the last recorded death by a driverless car.

Outsourcing Responsibility to Computers in the Old Man in the Cave

In this season five episode, nuclear war has left a small town struggling to survive with much of the rationed food now poisonous. To keep the population safe, the community turns to the titular old man in the cave to declare which food is fit for human consumption.

It later turns out that the man, who only the townâ€™s leader is allowed to consult, is actually a computer. When the town discovers this treachery, the occupants tuck into food ruled as unsafe, only to all die as a result.

Today, much of our decision-making is informed by computers and their sense of algorithmic certainty, from what you watch next on Netflix to who seems like a good match on Tinder. But, more worryingly, some believe that our reliance on Google to look up anything on demand is causing our brains to be less effective at holding memories â€” a phenomenon dubbed â€œdigital amnesia.â€

Extreme Plastic Surgery in Number 12 Looks Just Like You

The Twilight ZoneÂ famously commented upon unrealistic beauty standards and the ridiculousness of vanity in one of its best-loved episodes: â€œEye of the Beholder.â€ But â€œNumber 12 Looks Just Like Youâ€ makes the point even more explicitly.

In this society, all people undergo â€œthe Transformationâ€ where, aged 19, their body is altered to look like a physically beautiful model. Female Model 12 is especially popular, hence the title.

Of all the episodes with echoes in the future, Serling seemed to see this one as the most plausible, as he made clear in his closing monologue:

â€œPortrait of a young lady in love – with herself. Improbable? Perhaps. But in an age of plastic surgery, body building, and an infinity of cosmetics, let us hesitate to say impossible. These, and other strange blessings, may be waiting in the future, which, after all, is The Twilight Zone.â€

In â€œStatic,â€ a man in his late 50s discovers an old radio which magically broadcasts shows and music from his heyday of the 1930s and 40s rather than the scheduled 1960s programming.

Suffice it to say, that hook wouldnâ€™t work in a show broadcast today. Want to watch a commercial you saw in 1992? You can probably find it in about five minutes on YouTube.

True, computers canâ€™t physically turn back time as the radio in â€œStaticâ€ ultimately does. But the sense of delightful nostalgia can be replicated in a browser tab right now.

Robot Helpers in the Lateness of the Hour

Robots helpers pop up in various The Twilight ZoneÂ episodes, including â€œUncle Simonâ€ and â€œI Sing the Body Electric.â€ But in â€œThe Lateness of the Hour,â€ humanoid robot helpers donâ€™t know theyâ€™re robots.

In truth, while we have robot vacuums and lawn mowers, weâ€™re some way off a machine with the dexterity to perform human tasks like unloading the dishwasher and tidying up.Â Amazonâ€™s AstroÂ is the closest weâ€™ve got to a robot butler at the moment, and itâ€™s undone by a simple staircase, let alone a pile of laundry.

But make no mistake: big companies like Tesla and Dyson are working on the problem, which will likely be the next frontier in smart homes. Hopefully, they wonâ€™t suffer the same identity crisis as Jana in â€œThe Lateness of the Hour,â€ though.

The Threat of Electable Fascism in Heâ€™s Alive

One of the criticisms of the most recent The Twilight ZoneÂ reboot is that its political message was as subtle as a neon bulldozer.

But people forget that the Serling originals could also allow subtlety to take a holiday from time to time, with the likes of â€œFour Oâ€™Clockâ€ and â€œHeâ€™s Alive.â€ The latter features the ghost of Hitler inspiring a far-right activist to attract support in a functioning democracy.

With far-right politicians succeeding at the ballot box around the world, itâ€™s a good time to reflect on Rod Serlingâ€™s haunting closing monologue:

The Twilight Zone VR is out now on Oculus Quest 2. A PSVR version will follow at a later date.

This article was produced byÂ Wealth of Geeks.

Alan Martin is a freelance writer based across the Atlantic in London, with bylines dotted across the web and in print. Specializing in technology, games and internet culture, you’ll likely find him running, playing through Spelunky for the millionth time, or cheering on his beloved Derby County.