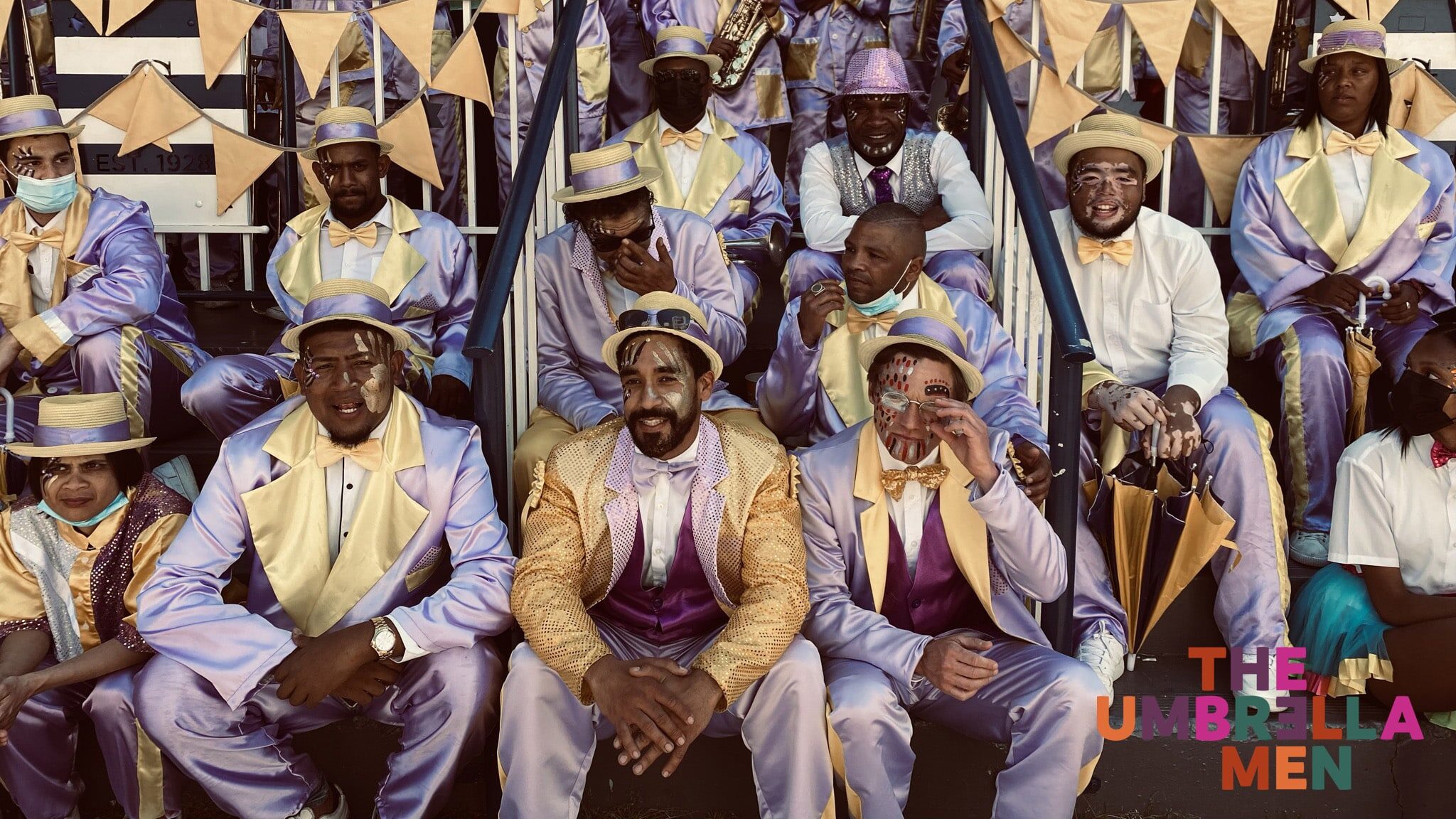 Heist films will always be a source of fascination and suspense for audiences, even if we know all the beats. Generally, a group of underdogs gather to right an injustice, which means they must rob a powerful, wealthy entity to balance the scales a little. Not to mention rake in that money.

Rarely has the genre been as specific and universal as that of The Umbrella Men, with South African writer-director John Barker bringing a keen eye to the Cape Town culture that will appeal to insiders and observers alike. That said, anyone expecting depth in regards to some of the actual people shouldn’t get their hopes up.

There’s some consolation in that the event which inspires much of the film’s events is practically a character in itself. The Cape Town Minstrel Carnival has been celebrated for centuries and was the only day that those who were enslaved were allowed to have off. Since then, it apparently became a day celebrating freedom, with a festival incorporating music and dance.

It’s a rich history that Jerome (Jaques De Silva) and his family have been a part of for decades through their minstrel troupe, The Umbrella Men, and his father’s Goema Club. Jerome has rejected his history and left home, making good in the big city, only to return to find that he’s inherited a club that is very much in debt in their gentrifying community. Some things, like the lovingly dysfunctional insanity that is family, truly are universal.

The dangers are quickly made apparent, and the limited time they have to potentially solve them, which in terms of bare facts, amounts to about a million they have to pay in two weeks, or the bank takes the Club.

The more human costs are also apparent, namely that another mainstay of a community that has provided assistance to those in need for decades is on the verge of being rubbed out forever. Once the prodigal son accepts that he cares about keeping his family’s legacy alive, he just as quickly proposes a solution: rob the bank and use the Carnival as a cover.

It’s not hard to root for Jerome and his friends to succeed since the corruption that the opposition hardly bothers to hide is made clear. His own uncle Tariek (Abduragman Adams) is literally selling out his neighborhood to gentrifiers to enrich himself, and he’s even working with the bank to do it.

He and the movie’s bank representative Mr. El Fontein (Daniel Barnett), are appropriately dripping with smarm, sexism, and greed – and they are the ones who have a grip on much of the money and power. A humiliating loss for these guys is pretty easy to wish for.

Jerome and his friends are also the underdogs you’d expect, with many of his friends and family providing the connections that assist him in bringing in the muscle he needs to take on the people stripping his community of agency. And what they’re actually after is, in fact, a piece of their ancestors’ wealth that was stolen and used to enrich their colonizers.

In other words, The Umbrella Men can claim their robbery is in the pursuit of justice with a straight face. Their side may be relatively short on a female presence, but Barker’s portrait of those taking their power back is bound to please, if not exactly thrill.

Once we get down to the business of the heist itself, it’s not nearly as memorable as simply getting to know the neighborhood under threat, which in a rare wide shot is revealed to be one of the last bastions of life and color among increasingly dull, plain surroundings. Even if The Umbrella Men tries to include the unexpected, suspense is never quite achieved, but it’s still, undoubtedly, deeply satisfying to see a story like this end in a different way, at least on-screen.

After premiering at the 2022 Toronto International Film Festival, The Umbrella Men wide release is yet to be determined.

Check out our breakdown of the hottest new movies in theaters now.

They Have More Money Than Anyone on Earth