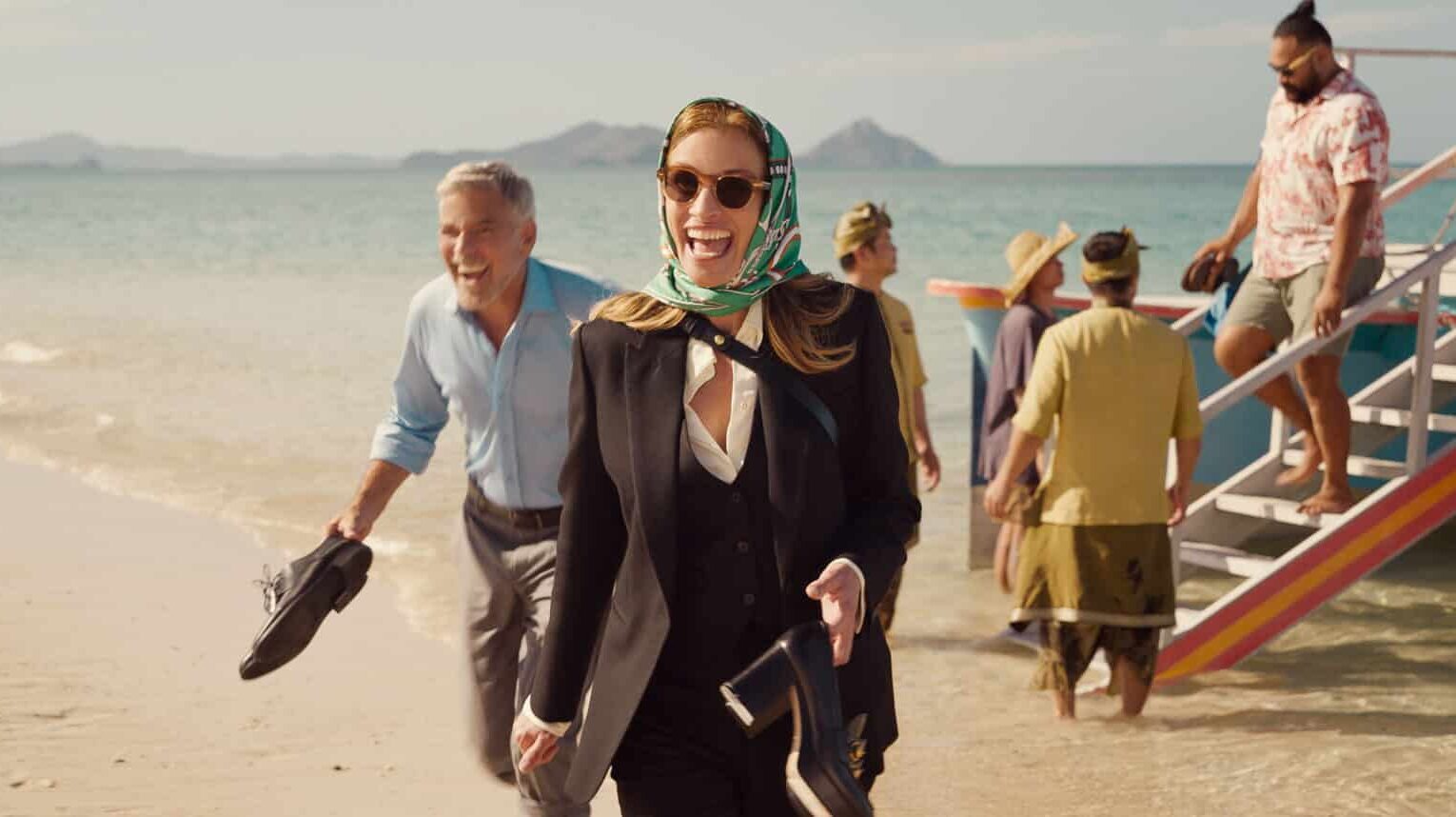 The moment Julia Roberts is introduced casually bidding $70,000 at an auction, you know Ticket to Paradise is going to be that kind of movie. Turns out, I didn’t have an inkling how much it would not let up, and all the chemistry and history with George Clooney isn’t nearly enough.

Roberts and Clooney are the annoyingly oblivious Georgia and David, who once fell head over heels for each in college and married despite misgivings on the part of many. Theirs was a tale of romance that ended in divorce a mere five years later, and the two now have a contentious repartee that movies love spinning into rom-com bliss.

The only time they manage to get along is in the interests of their daughter Lily (Kaitlyn Dever), freshly graduated from college and ready to kickstart the lawyer career she’s spent years working towards. But first she must embark on that obligatory tropical vacation that is the birthright of many a youth spent safely ensconced in the upper class, and heads to Bali with her boozy BFF Wren (Billie Lourd).

Little more than a month later, Lily announces she plans to stay in Bali, marry a local seaweed farmer, and renounce her plans to work in the law. Convinced she’s repeating their mistake, Georgia and David fly out to Bali in an attempt to persuade their daughter to abandon both newfound intended and tropical paradise and return to the States with them.

It's Not the Destination

Watching Paradise was an extremely unwelcome reminder of why I never made it past the pilot of Girls. Likeability aside, nobody seemed interesting or worth spending time with, and any kind of concern for them was unnecessary when consequences for their actions were virtually nonexistent.

If fiancé Gede (Maxime Bouttier) seems about as realistic as Sidney Poitier in Guess Who’s Coming to Dinner, another film which put white comfort first by ensuring that the model minority marrying their daughter wouldn’t think of taking advantage or risking parental disapproval and would be sent safely abroad to avoid facing the unpleasant reality of confronting white social circles, his family at least seems far more interesting.

They’re given about as much time and development as you can guess, which is enough to have character but not enough to distract from the movie’s intended audience of middle-aged white people who can’t conceive of this story not being all about them. From what little dialogue they’re allowed, it’s clear that the potential in-laws occupy their own place at the top of their food chain, with the immensity of their seaweed farm and partnership with Whole Foods, along with some great comedic timing.

Scratch that though, because Ticket to Paradise is all about the enemies to lovers journey, even if it’s hardly worth traveling. Clooney and Roberts have an unquestionable warmth for each other borne of years of friendship and collaboration, but David makes it clear early on how little respect he has for Georgia and her art gallery job, and the two of them can’t even agree over how to share an armrest.

Theirs is a deeply toxic relationship, and their eventual reconnection owes more to a common goal in a beautiful setting rather than any second chance romance. But romance isn’t really the obsession in Ticket to Paradise. The real prize is youth, and the promise and certainty it represents. It’s why Lily is seen as the better part of them both, but that’s a pretty easy accomplishment when you haven’t had the chance to screw up as much as your parents have.

Worse yet is how Ticket sees love itself. Georgia mentions it may be off the table for her because she’s “too old to feel young.” In other words, love isn’t about growing as a person, it’s about feeling like you can start fresh, with a clean slate. No wonder the movie believes that Lily and Gede’s marriage is bound to succeed because she can’t stop looking at him in their beautiful surroundings. She’s seeing him and Bali for the first time, at their best, and for Ticket, love means holding on to that youthful feeling, not letting it grow and change as we must inevitably do.

A relationship ending can only equal failure then, and failure is a phenomenon that no one in Lily’s family can understand, let alone tolerate. Georgia and David must reconnect then, since to do otherwise would mean admitting they loved and lost. These are the least likely people to supposedly revive the rom-com, a genre that has been thriving for years.

But a world of wealth and privilege doesn’t have to equal a lack of investment. Practically every classic screwball comedy was set among the upper crust during the height of the Depression and World War II, where star power and physical comedy, not to mention many a remarriage plot, fueled the humor rather than detracted from it.

In Ticket, a great love story once again comes down to the movie stars who must give their approval to the next generation that’s supposedly getting it right. And in the most cliche way possible, it ends the only way it could: a freeze frame that allows the promise it represents to remain forever pristine.

Laughably Bad Horror Movies and Where to Stream Them