These are the best Showtime series of all time that you can watch or stream right now.

Over the past 10 years or so Showtime has produced many big hits for their viewers. They have aired shows that have made big splashes in the pop culture entertainment business.

Series that range from Sacha Baron Cohen’s Who Is America?, to the financial drama, Billions, which features the first non-binary character on television. This was another huge leap forward for the already famously queer-friendly network.

It is difficult to pick a top ten with as much success as Showtime has had with their original programming during the past decade. Some honorable mentions that were this close to making it include The Chi, Episodes, Masters of Sex and Nurse Jackie.

Here are the Top 10 Showtime Series of all time.

The Affair, the brainchild of Sarah Treem and Hagai Levi, creatively tackles the short and long term ramifications of an affair. The writers use a perspective based storytelling method along with flashforward and flashbacks to break up the storylines.

The different character perspectives are interesting as you see how their perceptions of events and conversations vary. As the seasons progress more viewpoints are added which adds to the drama of the underlying tales.

Filmed mostly in New York but also in LA, The Affair and the actors were nominated for and won many awards including Best Television Series Drama, Best Actor, Best Actress, and Best Supporting Actress.

The Big C is a comedy/drama series created by Darlene Hunt and starring Laura Linney and Oliver Platt.

Cathy is a school teacher in the midwest and is diagnosed with Stage 4 melanoma. Much like her very normal reactions, the show itself goes from tears of joy to tears of desperation and sorrow and then back again. This full range of emotions is what can be expected from nearly every episode.

What would you do if you found out that you didn't have long to live? Would you tell everyone right away? Would you keep it to yourself and not even tell your family?

Would you change your lifestyle? Would your perspective on life change at all? The Big C shares a unique take on this scenario in a humorous and thoughtful, provoking way. 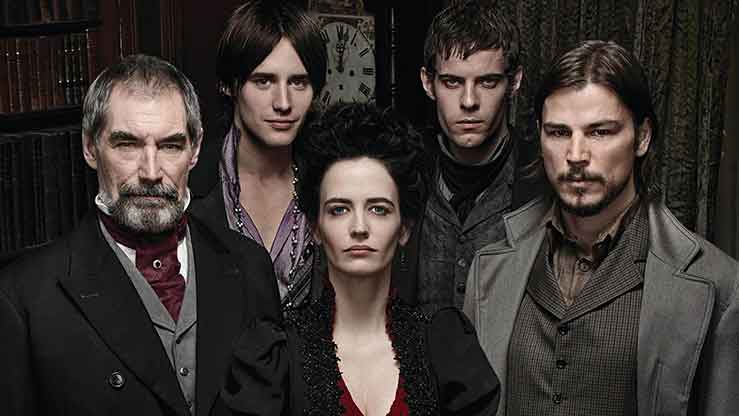 Take Dr. Frankenstein and his monster, Dracula and Mina Murray, Dr. Jekyll, Abraham Van Helsing, and Dorian Gray and others, mix them up and you get three seasons of delightful horror. This is for the wicked though, not the weak.

John Logan, the creator, and the main writer takes the familiar classic monsters and amplifies them to the maximum. The acting is top-notch and the writing is edgy and compelling.

The visuals and visceral emotions experienced while watching are intoxicating. At times the episodes feel like mini-movies they are so well done.

If you love the Hammer films, this is right up your rotting corpse.

The Homeland series tells the story of Carrie Mathison, who is a manic depressive patient and a CIA agent. Carrie believes that Nicholas Brody, who was a prisoner of war for eight years, is a traitor. Carrie thinks that the security intelligence he provides is false and he is part of a larger plot of El – Qaeda to destroy the United States and the West.

Her extraordinary research about the threats for the USA in Iraq causes a diplomatic scandal between Iraq and the USA. She gets assigned to another unit of the department, and the government stops her research.

From there the series moves to many locations across the globe while dangling tales of terrorism and espionage all around.

After 8 seasons and 5 Golden Globes, among many other awards, the show continues on.

Created by Brian Koppelman, David Levien, and Andrew Ross Sorkin, Billions is still on the air after 4 seasons with the fifth season premiering on May 3, 2020. This show is about a U.S. attorney who aggressively goes after a hedge fund billionaire who utilizes bribes and inside trading information to grow his New York money empire.

The story is loosely based on Preet Bharara, a U.S. attorney and Steve Cohen, a manager at SAC Capital Advisors. Cohen's company was required to pay $1.8 billion in fines in 2013 for their illegal activities.

When two giant forces, with both power and money, are repeatedly crashing against one another something has to give right? The battle of wits and for the affection of one of their wives creates a new twist to the already tangled web of moves and countermoves.

While the first two seasons were lights out, off the charts, spectacular, the following 2 seasons the storylines and character interactions grew weaker. Hopefully, they will get it back in season 5.

Californication, created by Tom Kapinos who was also the main scriptwriter, provided 7 entertaining seasons of sex, drugs and rock & roll with this show. Actor David Duchovny (X-Files) plays Hank Moody who is a struggling writer coming to grips with a mid-life crisis.

Moody's move from New York to California provides the title and also the backdrop for the craziness that he brings into his and his daughter's life. Duchovny pulls off his character, as he usually does, with style, deadpan grace and the bit of quirkiness that most have come to love about him.

Moody deals with writer's block, his ex, fornicating with the woman of the week/month while providing laughs aplenty. There is a certain charm to the show, even with all the adult content and relationship woes.

There are so many notable supporting cast members, there isn't room to list them all. Know that they are there and that they make the show all that more worth the watch.

The pilot of Ray Donovan, created by Ann Biderman, started off with a bang as the biggest premiere ever for a show on Showtime. That strong start gave the show momentum to help keep it going for seven seasons.

Ray Donovan is a professional “fixer” for the rich and famous in Los Angeles working through a prestigious law firm. If something needs to be done and it could be a little “dirty,” Ray is their go-to guy.

As good as Ray is at fixing problems for other people, when it comes to his own family he could use some pointers. The old phrase, we don't get to choose our own family, is amplified for Donovan especially in regards to his father.

The show's last episode was on January 19, 2020, and the announcement on February 4 that the show had been canceled came as a surprise. The series has a big following and those fans have not given up trying to get their eighth season.

Twin Peaks. David Lynch. Mark Frost. The original run lasted only 2 seasons, yet most everyone knows about the series even if they haven't watched it. Flash forward 27 years to 2017. The third season, also known as Twin Peaks: The Return, was presented as a glorious gift from beyond.

Kyle MacLachlan returns as the lead along with several other cast members. The core concept of the show remains, with unusual stories, weird stuff, and some camp to keep it all lighthearted.

There are numerous guest stars such as Harry Dean Stanton who was in a very emotional scene with Lisa Coronado during “Part 6” “Don't Die.” Ashley Judd, Laura Dern, Josh McDermitt and others also made guest appearances.

Shameless is a comedy based upon Paul Abbott's British show named the same. John Wells is the showrunner of this series which is now at an amazing 10 seasons!

Shameless stars William H. Macy and Emmy Rossum as a father/daughter team trying to keep a household running and the other five kids alive. Anything more than that is just a bonus on most days. Filmed in Chicago and in Los Angeles, this series is hilarious.

Macy's character is a drunk who spends most of his time at the bars or on the floor passed out. The entire family seems like real people who could be your neighbors. I'm still not sure if that would be a good thing or a bad thing, but you for sure would love them.

The show has been renewed for an eleventh and final season which will air sometime in 2020.

The first season of Dexter is based upon the book Darkly Dreaming Dexter (2004) written by Jeff Lindsay. While Lindsay wrote additional books for this character, the T.V. show, run by James Manos Jr., does not follow those storylines.

The series stars Michael C. Hall as Dexter Morgan who works for the Miami Metro PD as a blood-splatter analyst. While he is the top expert in his field, he really uses his job as a cover to find and “remove” bad people. He eliminates those criminals that the legal system fails to protect the people from such as ruthless killers that get off on technicalities.

Dexter was an orphan at three years of age and was raised by a cop who taught him policing techniques as he grew up. He always had anger issues and his adopted Dad taught him to channel that anger in ways in which he would never get caught. That appears to be some great parenting there, but trust me, it works.

Dexter's sarcastic humor helps to lighten the mood from the bloodfest he enjoys dabbling in from time to time. The writing is brilliant and the various bad guy stories are fresh and binge-worthy. Once you start watching, grab a blanket and some popcorn because you will be bloody hooked.