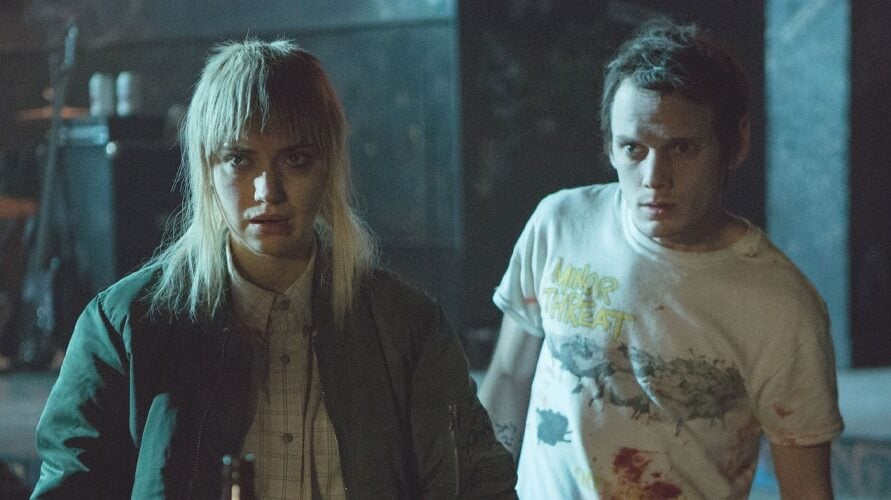 Who doesn’t love a good scary movie? The spine-tingling rush, the goosebumps on your arms, the sigh of relief after the sudden jumpscare — it’s all just part of the rollercoaster of emotions we feel watching a really great horror movie.

I’m sure many people have seen or at least know about the landmark horror movies either your friends or your family members have told you about, IE Jaws, Alien, The Exorcist, etc. However, the horror genre has an almost unfathomably large assortment of movies, a decent of which, for some reason or another, frankly don’t get the credit they’re due. With that in mind, we decided to give a little love to a few horror movies we felt needed a little more appreciation. Here are 10 must-watch underrated horror movies and where you’re currently able to stream them.

List Criteria: Similar to our previous Top 10 Slasher Movies list, we opted to stick to standalone horror movies and initial entries in horror franchises rather than including sequels, prequels, or spin-offs on this list. Reboots, however — as is the case for our last list entry — were fair game.

A highly inventive take on the slasher movie, The Final Girls is a humorous parody/homage of sorts to classic horror movies of the 1980s featuring an absolutely stacked cast. Three years after her actress mother’s death, a high school student (Taissa Farmiga) and her group of friends (Alia Shawkat, Thomas Middleditch, Alexander Ludwig, and Nina Dobrev) attend a theater showing of her mom’s cult classic slasher movie, only to find themselves transported into the movie and struggling to survive against the film’s machete-wielding maniac.

Blending elements of Friday the 13th, The Burning, and numerous other slasher movies of the ‘80s, The Final Girls offers a very unique take on the genre, mixing humor with horror to create one of the most outside-the-box comedy slashers out there.

An early Robert Rodriguez movie, this late ‘90s horror movie was largely ignored upon initial release, only to gain a cult following years later. Taking elements from classic B-horror movies as well as from earlier 1980s’ John Hughes teen movies, The Faculty tells the story of an alien parasite taking over a small Midwestern high school and replacing the school faculty with mind-controlled duplicates.

To prevent the parasite from spreading, a group of outcast high school students band together to stop their teachers and save the world. Equal parts Invasion of the Body Snatchers, The Breakfast Club, and John Carpenter’s The Thing, The Faculty is a fun, sadly overlooked gem from Rodriguez and screenwriter Kevin Williamson (creator of the Scream franchise). For ‘90s kids or fans of teen shows like Dawson’s Creek or Eerie Indiana and movies like 10 Things I Hate About You, this is essential viewing.

Hypothetically, we could fill this entire list with A24’s fantastic, not-entirely-well-known horror movies (The Blackcoat’s Daughter, In Fabric, The Witch, Slice — the list goes on and on), but we opted to go with the amazingly underrated suspenseful horror thriller, Green Room.

From director Jeremy Saulnier (who also made the equally underrated crime thriller, Blue Ruin), Green Room tells the story of a heavy metal band trapped in a small sound room after witnessing a group of skinheads accidentally kill a woman.

Mirroring the plot of zombie movies like Night of the Living Dead, the band must try to survive the night while battling wave after wave of assault from the skinheads who are trying to break in. Tense, violent, and downright terrifying, Green Room is one of A24’s absolute best movies, as well as one of the best horror movies the indie studio has ever released.

Famed Italian B-movie director Mario Bava’s 1963 horror anthology, Black Sabbath is today regarded as the filmmaker’s masterpiece, a movie that would go on to serve as the main inspiration for Quentin Tarantino’s Pulp Fiction as well as serving as the namesake for a then-unknown British rock band who would become known as Black Sabbath.

Divided into three segments introduced by horror icon Boris Karloff (who also starred in the movie’s segment, “The Wurdulak”), Black Sabbath can be seen as one of the early precursors to the Italian giallo subgenre of horror. Though not initially well-reviewed upon its release (it also bombed at the box office, resulting in a potential sequel starring Christopher Lee getting canceled), Black Sabbath’s reputation has considerably grown over the years, with each of the three segments scaring viewers silly to this day.

If we’re playing favorites, we personally think the movie’s third segment, “The Drop of Water” is the scariest, although you’ll just have to watch it yourself to make up your mind.

Night of the Creeps

A cult classic from the 1980s’, Night of the Creeps is one of the greatest B-movies of its era (and boy, were there were a lot of those).

Starring the equally underrated character actor Tom Atkins (a favorite of horror icon John Carpenter who used Atkins for his movies The Fog and Escape from New York), a no-nonsense hardboiled detective teams up with two college outcasts to battle a horde of their zombie-like college students who have been infected by an alien parasite. M

ixing in horror staples like zombies, slashers, and an alien invasion, Night of the Creeps was director Fred Dekker’s homage/parody of the 1950s’ B-movies he loved growing up, and is one of the most fun, over-the-top horror-comedies you’ll ever see.

Based largely around the success of Jaws, the whole “killer animals” subgenre of horror has had its fair share of flops — hence why you’ll see a ton of Jaws rip-offs like Piranha, Orca, Grizzly, and Alligator (the latter of which is actually a pretty enjoyable movie that nearly made this list from screenwriter John Sayles, who would later become one of the most popular indie filmmakers of his day).

However, Rogue, the 2007 Australian horror movie about a killer crocodile, set itself apart from other subpar “creature features,” creating a chilling movie that will have you adding yet another reason not to visit the Outback any time soon. Based on the real-life story of “Sweetheart,” an aggressive 17-foot saltwater crocodile who attacked several boats throughout the 1970s’, Rogue follows a group of tourists stranded on a small remote, rapidly flooding island, putting them at risk of a huge, man-eating crocodile lurking nearby.

Featuring superb effects for its time, Rogue is one of the absolute best “killer animal” movies in horror — obviously not as good as Jaws, but better than most other competitors out there.

Most horror movie fans might raise their eyebrows at this one, but we here at Wealth of Geeks love Sleepaway Camp. Yes, the first three acts might be a little dated, but this quintessential slasher has one of the greatest, absolutely terrifying endings to a movie you’ll ever see.

Following a now fairly standard slasher plotline, Sleepaway Camp focuses on a group of young teens staying at a summer camp who are being stalked by a sadistic killer targeting the campers and camp counselors. Part murder mystery, part slasher, full 1980s’,  Sleepaway Camp might be the only movie on this list that you start off laughing at like you would any bad movie from the 1980s’, yet legitimately freaks you out by the time the final act rolls around.

Behind the Mask: The Rise of Leslie Vernon

Like The Finals Girls, Behind the Mask: The Rise of Leslie Vernon is another homage that directly plays with the archetypes of the slasher genre. In this mockumentary-style black comedy horror, a group of journalists document a crazed serial killer who draws inspiration from slasher movie stereotypes.

Smart, clever, disturbing, and funny, Behind the Mask is a must for slasher fans, especially for its deadpan humor and obvious nods towards previous movies in the genre (the movie even has Robert Englund, the man behind Freddy Krueger’s scarred face, playing a supporting role as a therapist).

Not currently streaming, but available to rent online

Another slasher on the list (we promise, it’s the last one), Black Christmas is hands-down one of the best horror movies you’ve probably never heard of. One of the first films that kicked off the slasher genre as we know it today, Black Christmas is an unbelievably creepy home-invasion-type story. Around Christmastime on a college campus, a group of sorority sisters are stalked and killed by an unseen, unstable psychotic.

Unlike the other slashers on this list, however, Black Christmas is not at all funny — it’s just downright terrifying from beginning to end, especially its final act and ending. Weird tidbit: Apparently, this is one of famed comedian Steve Martin’s favorite movies ever — he even told the film's main star, Olivia Hussey, that he had seen it over 26 times.

Toho’s third reboot of its namesake Godzilla franchise and the twenty-ninth Godzilla-related movie the studio has put out, Shin Godzilla was universally acclaimed when it first came out in 2016, winning the Japan Academy Film Prize Award for Best Picture and Best Director.

Made in response to the newer American Godzilla movies from Legendary Pictures, Shin Godzilla brings the iconic movie monster back to Japan, giving it a slightly altered backstory and appearance. Unlike previous movies wherein Godzilla served as an allegory for the destructive nature of nuclear fallout from Nagasaki and Hiroshima, this movie’s version of the movie monster drew inspiration from the more recent 2011 Fukushima Daiichi nuclear disaster and the 2011 Tōhoku earthquake and tsunami.

Many critics praised Shin Godzilla for its satirization of Japanese politics (the movie heavily focuses on the inability of a bureaucracy to properly handle a devastating disaster and emergency), and the film went on to be the highest-grossing Japanese Godzilla movie ever. Like the original, it’s an incredibly intelligent movie, with Toho currently aiming to establish the movie as part of a new shared universe project similar to the MCU.

Not currently streaming, but available to rent online

Few genres have such truly hidden gems as horror does. If you dig deep enough, you’re bound to unearth some real treasures, and we feel this list best represents 10 of the absolute most underrated horror movies ever to be released.

For horror movie fans who have already seen these or were wondering what other underrated horror movies we recommend viewing, we also loved Ganja & Hess, a great experimental horror film that deals with vampirism; Hush, probably the best home-invasion-type scary movie to be released in years; and lastly, for those who don’t mind black-and-white movies and somewhat cheesy effects, anything with Vincent Price (specifically House of Wax, Theatre of Blood, House of Wax, The Witchfinder General, The Last Man on Earth, House of Wax, and oh, yeah, House of Wax).