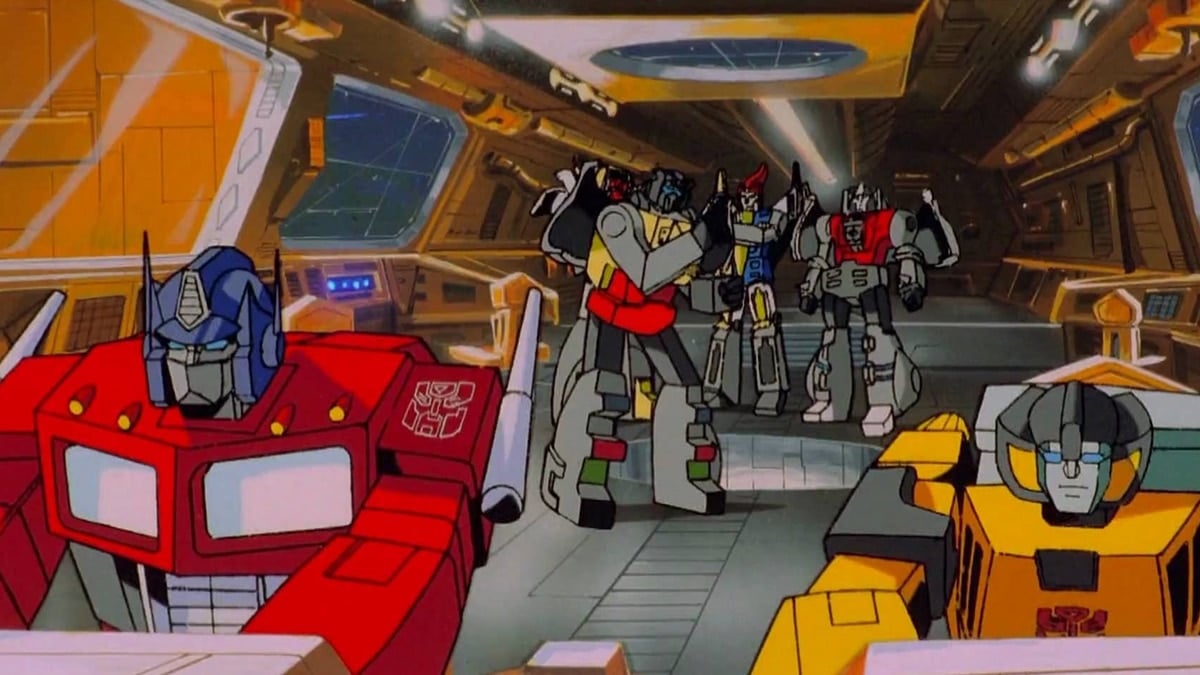 Ah, the ‘80s. Such a simpler time, famous for its large hairdos, flashy wardrobes, catchy pop songs, and a variety of colorful children’s TV programs — none more famous than the now classic animated series, The Transformers.

Based on Hasbro’s mecha toyline of robotic creatures that can metamorphose into vehicles, animals, and other mechanical devices, The Transformers ran for a healthy four seasons, totaling an impressive 98 episodes. Throughout its four-year run from 1983 to 1987, it delighted young audience members with its indelible action scenes, bright imagery, and memorable cast of characters.

In 1986, the series’ producers made the successful leap into the world of animated film, delivering a full-fledged feature-length movie that bridged The Transformers series’ second and third seasons. The resulting film — while admittedly a tad dated in a nostalgic, charming way — delivered many of the signature thrills and high octane level of excitement as the original series had, while also pushing the boundaries and tone of the show in new directions. Few critics were appreciative of the film at the time, but subsequent reviews over the years have steadily improved the movie’s reputation, with many now seeing it as being on par with — if not superior to — the newer series of Transformers movies by Michael Bay.

Set twenty years after The Transformers’ second season, the Autobots are on the brink of defeat in their war against the Decepticons. Having lost Cybertron to the sinister forces of Megatron (Frank Welker), the remaining Autobot forces under Optimus Prime (Peter Cullen) prepare to launch a daring counteroffensive to retake their home planet. When Megatron gets wind of Prime’s plan, however, he sets in motion an attack of his own, targeting the Autobots’ stronghold on Earth — Autobot City — that severely cripples the Autobots’ forces, leaving many dead or critically wounded.

Temporarily leaderless and with morale at an all-time low, the few surviving Autobots struggle to escape the villainous onslaught of the Decepticons, fleeing across space. As both sides face heavy losses, a newfound threat — the colossal, planet-sized Transformer, Unicron (Orson Welles) — intervenes. Planning to destroy Optimus’s Matrix of Leadership — the only thing powerful enough to stop him from consuming the entire universe — Unicron enslaves Megatron to do his bidding.

Repurposing him with a new body and giving him the new identity of Galvatron (Leonard Nimoy), Unicron releases his newly-reborn servant to destroy what few Autobots are left. Having scattered across the galaxy, the outnumbered Autobots must survive on numerous hostile planets while battling Galvatron — who secretly plans on using the Matrix for his own ulterior purpose.

Like The Transformers TV series, Transformers: The Movie might be an acquired taste, perhaps best suited for those who grew up watching the original cartoon or playing with any one of Hasbro’s line of Transformers action figures. However, that doesn’t necessarily make it completely unapproachable to those unfamiliar with Transformers or its canon. In many ways, it exists as a wonderful continuation of the original animated series, as well as serving as a comprehensive introduction to the Transformers universe for those new to the series. It’s light, easy to follow, and perfectly gets across many of the main points you need to understand the central storyline of Transformers.

But even more than that, it also pushes the boundaries of The Transformers series further, containing some surprisingly dark moments that add new light to certain characters. In the film, for example, pre-established and well-known characters on both sides of the Autobot-Decepticon war are killed off unexpectedly and, in some cases, pretty violently. Captured prisoners are burned alive in a giant acidic tank or fed to piranha-shark Transformer hybrids. Unicron gobbles up entire planets, consuming whole buildings and scores of hapless planetary occupants with one big gulp.

It’s uncharacteristically dark territory for a children’s show, but it shows Transformers’ growing genesis into something new, something distinctly more mature than the relative lightheartedness of its Saturday morning counterpart. Such bold changes helped keep the series relevant, marking a moment in the franchise where the series grew up a bit, keeping pace with its gradually maturing audience. It’s a lot like the adult moments viewers witnessed with the continuation of the otherwise child-friendly Batman: The Animated Series in Batman: Mask of the Phantasm.

And yet, the movie isn’t too dark for children’s tastes, either. Instead, its slight maturation helps it strike a middle ground for audience members of all ages, presenting a plotline where the stakes are legitimately high, and one where beloved characters can die at any moment. The change in tone gives the movie its edge, keeping you engaged and watching throughout.

However, the movie also retains much of the show’s signature characteristics. Namely, it possesses the same sense of humor, the same impressive action sequences, and the same fluidity and superior quality of animation as the original show. Every scene, no matter how minor, displays an abundance of technical and visual prowess, each environment and character uniquely and memorably designed.

The music, too, makes the entire film practically a sensory experience. Sprinkled throughout is an abundance of ‘80s era music, from synth-heavy background scores to more heavy metal tunes that accompany the movie’s numerous fight scenes (including Stan Bush’s now-famous use of “The Touch” and even “Weird Al” Yankovic’s “Dare To Be Stupid”). It’s music that perfectly fits with the aesthetic of the movie, going hand in hand with any one of the film’s several action sequences.

The performances of the voice actors involved are another significant highlight of the movie. An unexpected but welcome surprise is seeing the large list of notable actors attached to the film, from ‘80s teen heartthrobs like Judd Nelson to Hollywood legends like (the) Orson Welles. Each of them do a great job voicing their respective characters — and in some cases, like Megatron’s Frank Welker and Optimus Prime’s Peter Cullen, several characters at once.

For as great as Nelson is as the youthful Hot Rod or Monty Python’s Eric Idle is as the scatter-brained Wreck-Gar, the actors who hand in the best vocal performances are easily Welles and Nimoy. As Unicron (a role Welles famously hated), Welles speaks in a gentle, muted tone that borders more closely on a whisper, juxtaposing his massive physical size with his hushed, calming voice. It’s a vocal performance that makes you realize how great a fit Welles might’ve been for Darth Vader, as was initially planned by George Lucas, Welles handing in a phenomenal acting job in what would become the final role in his career. (Welles died shortly after completing his lines in the movie, which was released posthumously a year later.)

As the newly recreated version of Megatron, Nimoy similarly gives a wonderful take on the disgraced, down and out, but still incredibly dangerous leader of the Decepticons. It helps that Nimoy brings the same level of harshness as Welker’s gravelly-voiced Megatron, but Nimoy also manages to bring out this certain restrained ambiguity when it comes to Galvatron. Hearing his frustration, desperation, and inner hatred he’s temporarily keeping in check, he seems more like a feral dog loyal to Unicron only because he happens to be the one holding Galvatron’s leash. The moment he’s cut loose, you know Galvatron will find a way to assert his own will over Unicron, not letting size or power interfere with his own belief that he’s the strongest being in the universe.

Between its design and soundtrack, some viewers might see the movie as a little dated or rooted too deeply in the ‘80s. However, that isn’t necessarily a bad thing. If anything, it helps the movie stand apart, taking on a retro quality that only can be described as distinctly belonging to the 1980s — not unlike the look and feel of the first Terminator or Escape From New York.

Watching it is a lot being transported back in time, similar to the feeling you get when you start playing old cabinet arcade games like Pac-Man or even watching Stranger Things. Whether you were alive in the ‘80s or not doesn’t matter — watching Transformers, you’re returned to a bygone era, a simpler time where Transformers lined the toy store shelves and heavy metal was just beginning to take off in popularity.

It’s a healthy dose of nostalgia that has entertained entire generations of fans, a blast from the past that has only continued to appreciate in value to this day. For younger viewers, too, it can be an exciting way to kick off your interest in Transformers, more closely capturing the spirit and tone of the original cartoon series than the more adult Michael Bay-produced Transformers films of today.

The Truth About Blac Chyna’s Net Worth Will Surprise You