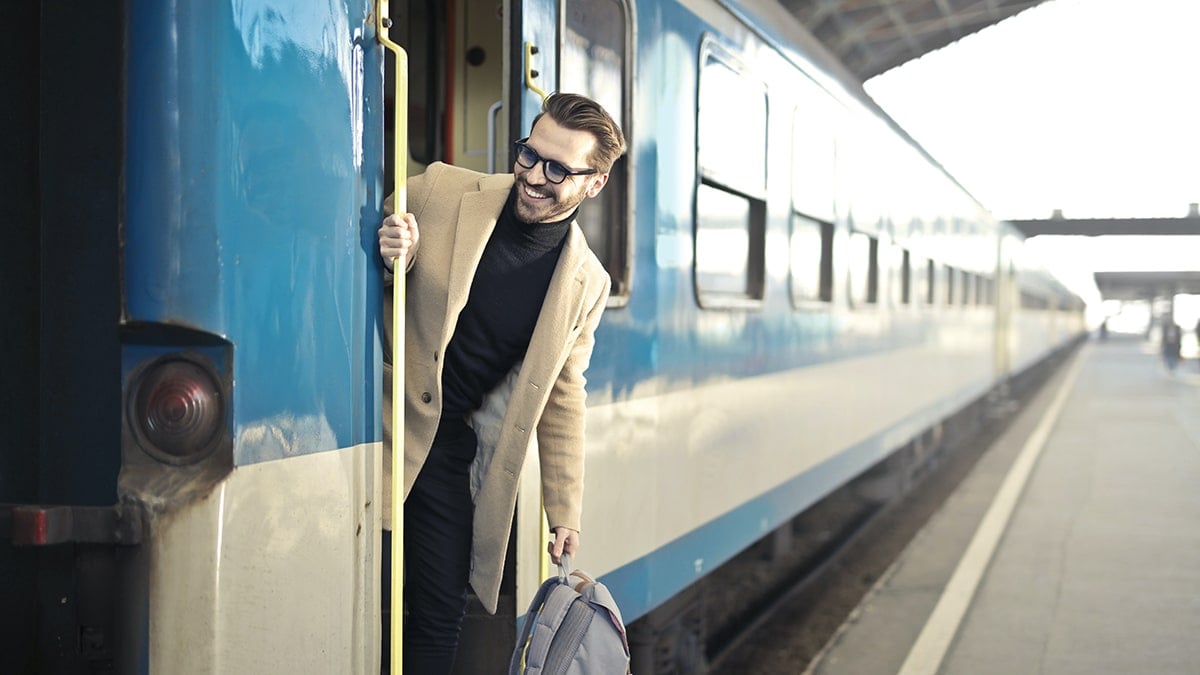 Airlines are canceling and delaying flights.

These days, it isn't very reliable to depend on sky transportation.

So, people may turn to another transit mode: The train.

AmtrakÂ is the only train company in the United States to travel across the country and carry passengers.

Make the Train Ride Part of Your Vacation

Loomis, a Hawaiian resident, has plenty of advice on affordable and comfortable train rides, especially on Amtrak. He grew up in Connecticut riding the train. Now, he may live on an island, but he makes sure to travel by train whenever he visits the mainland.

The first tip â€“ â€œthink of your long-distance travel as part of your vacation experience,â€ Loomis advised.

Viewing your train ride as a part of the holiday trip is the main difference between rail and air travel. When passengers get on a plane, they feel like they still have not started their vacation. There's the noise of a crying baby, the narrow seats, and the overall cramped flight experience.

It's not until they land in their destination city that flight passengers finally feel like they are on vacation, he said. However, Loomis said train travelers could kick off the vacation as soon as they step onto the train car.

For starters, railers have the opportunity to sightsee from their seats or roomettes, take pictures, and relax. Many also dish out the extra cash to pay for a roomette, a private room with a bed to spend the night.

Loomis, and another travel pro,Â Carole Burns, agree paying more for roomettes is one of the best ways to enjoy a train ride.

She'd mistakenly bought the coach seat when she journeyed from California to Chicago alongÂ Route 66. She rode for two-and-a-half days, sitting in a lounge seat, taking photos of the views she saw from her window.

(Added tip â€“ take pictures with a cell phone pressed against the glass. Then there won't be a glare.)

If needed, Burns could go to the lounge bar and purchase snacks for something to eat.

It was all right, Burns explained. However, the roomette ticket includes a room to sleep in the sleeping cart and three daily meals. The snacks are nothing compared to what the train provides for meals.

It's a lot more comfortable because passengers have more privacy. â€œYou are kind of in a different area of the train,â€ Burns said. â€œYou have a separate room with windows.â€

There are two kinds of sleeping carts. The type a commuter train has depends on geography.

Aside from size differences â€“ superliners have two levels. The lower level consists of three bathrooms; a large storage rack for passengers' baggage; four roomettes; a family bedroom (reserved for two adults and two small kids); and a handicap, accessible bedroom made for an individual along with an attending relative or nurse.

The upper level has ten roomettes, five spaces bordering each side of the aisle. Five of the bedrooms share a bathroom on that upper level. The remaining five have a combination toilet/shower.

Meanwhile, the one-deck Viewliner has 12 roomettes, one large bedroom, and one handicap-accessible room. The original Viewliner roomettes have a sink and toilet in each room. However, the newer Viewliners no longer have bathrooms in the rooms due to maintenance issues.

Other Tidbits From Rail Pros

Burns also provided some valuable nuggets about the phone situation on trains.

Burns said Farers should bring extra adapters with multiple USB slots to keep their cell phones charged. Unfortunately, there aren't any USB slots on the trains.

Also, the Internet's strength depends on the number of people using it. Therefore, downloading movies before the trip might be a good idea. Then there won't be any concerns about waiting for lengthy downloads while on the train.

Burns also suggested calling cell carriers to get a package deal for those vacation days to avoid roaming charges.

The two train pros said trains are usually not on schedule. However,Â LoomisÂ said he uses the train's unpredictable schedule to his advantage.

If he has to make a connection, he makes sure to book a hotel room to stay overnight in the city where he has the connecting train. Then, he relaxes, enjoys the city and landmarks, and doesn't have to stress about making his connecting train.

Both are globe trotters too.

Loomis remembers riding on a version of the TransSiberian train. He passed through Moscow, Mongolia, and Beijing on the way to Siberia.

â€œIt was astonishing. I expected to ride for three hours, pass a pine forest, pass a gulag, and more pine forests,â€ Loomis said. â€œInstead, there were cities of 17,000 people. There was a metro system. It was a real eye-opener for me. It was an extraordinary trip.â€

Burns had gone on an 11-day trip to Europe when her son was studying in London. On the â€œrapid tour,â€ they visited London,Â France, Luxembourg, and Italy. â€œIt was amazing,â€ she said.

Get a Travel Agent

Mrs. Burns said one of her best recommendations is to use a travel agent. A travel agent helps with the language barrier by pointing out services that could simplify communication with foreigners.

She commented on her extensive travel knowledge and said most agents have already had touristy adventures. â€œSo we know what to expect. Therefore, we know all of those ins and out,â€ she said.

In addition, the agents would also have ideas about what to do at the destination once it's reached.

â€œWe take on the responsibility of getting you where you need to go,â€ she said. â€œWe make sure your trip is memorable and fun.â€

She likened the train voyage to â€œa cross between an RV and driving.â€ She said passengers don't have the luxury of a flight attendant.â€

â€œThere are lots of little oopsies that can trip you,â€ Burns said. A travel agent can prevent those â€œoopsiesâ€ from occurring.

At 85, Loomis will keep riding trains. He has a trip planned from August 24 to September 17.

Besides visiting friends and family, he's using the train to catch some Boston Red Sox games. He plans to start the first leg of the trip with a flight from Seattle to Minnesota, and then he'll watch his first Red Sox game.

8 Important Steps To Be the Best You Can Be

5 Things You Can’t Do With Bad Credit